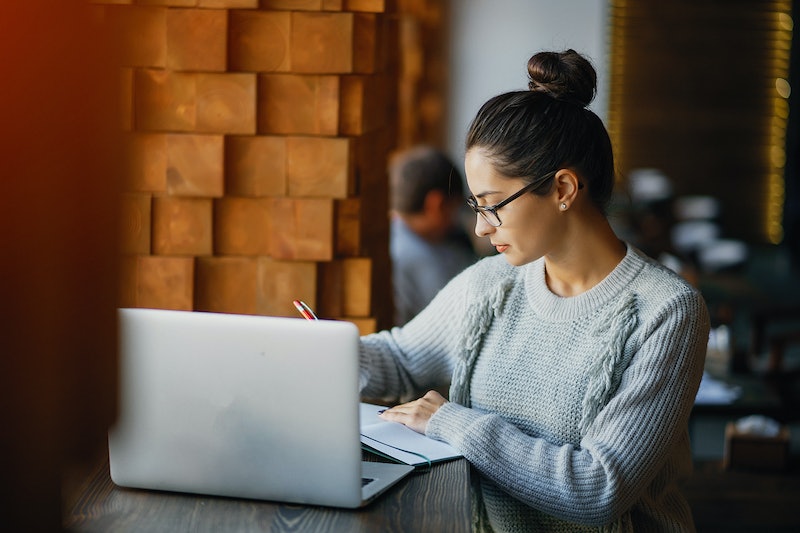 If you're prone to putting things off for tomorrow when you definitely could do them today, you may be a bit of a procrastinator. Everybody has done it once or twice; sometimes it's just more alluring to stream Netflix than stick to a deadline. However, experts tell the common conception of procrastination as a problem with willpower or laziness is actually incorrect, and the neuroscience of procrastination reveals its true nature. When scientists examine what happens in your brain when you procrastinate, they uncovered a struggle between two brain sections — and the fact that procrastination is an issue with emotions, not lack of willpower.

The two relevant parts of the brain when it comes to procrastination, experts tell Bustle, are the prefrontal cortex and the amygdala. The amygdala is a small, almond-shaped set of neurons that are involved in our emotional processing and fear response.

"The amygdala is basically your survival mechanism; it's scanning the environment for anything that might be a threat," psychologist Paola Bailey, PsyD, tells Bustle. "As soon as it detects something, it releases hormones, adrenaline being the main one, that change your physiology and allow you to flee or avoid the attack." The amygdala is part of the brain's limbic system, which is concerned with our emotional responses and the behaviors we need to survive. The prefrontal cortex, meanwhile, contributes to executive function, or our ability to self-regulate. When we're able to make plans for the future, switch easily between tasks, or stop ourselves from doing something, that's executive function kicking in.

Dr. Tim Pychyl, PhD, head of the Procrastination Research Group, tells Bustle that procrastination is a struggle between these two systems. If you're procrastinating, he says, you're experiencing "a dance between the amygdala or the limbic system, the emotional brain, and the prefrontal cortex." A procrastinator, he tells Bustle, encounters something they find "aversive," or unappealing: they don't want to do it because it's boring, or frustrating, or causes anxiety, or may have poor results. This emotional response, he says, is rooted in the limbic system, which decides that the task is unpleasant and motivates us emotionally to avoid it. "That's human nature: we avoid to feel better," he says.

The amygdala promotes this avoidance because it's all about making us run away from things that might threaten us. From an evolutionary perspective, Bailey tells Bustle, the amygdala exists to get us to run away from animals or natural situations that were trying to kill us. Unfortunately, as society has evolved, it hasn't changed its reactions. "We face all kinds of internal threats, but our amydala can't really tell the difference between those and an attacking leopard," Bailey says. "Your body recognizes the task you're avoiding as a threat, it creates anxiety, and your natural reaction is the same fight-or-flight which it would in nature: to get away from the threat. The problem is that this isn't a tiger that's going to eat you, and getting away from the task is only going to make it worse."

The prefrontal cortex, meanwhile, is attempting to get you to ignore those negative feelings and push ahead with the task, even though it's unpleasant right now, because the rewards of getting it done are worth it. "When we procrastinate, we're acting like a child, which makes sense, because the limbic system is intensely childlike," Dr. Pychyl says. "That's what society says growing up is: the ability not to succumb to how you're feeling at the moment."

MRI scans of procrastinators have revealed multiple actions in the brain that appear to stop the prefrontal cortex taking control and helping you get over your emotional reactions. A study in 2016 revealed that the default mode network, a series of areas of the brain that are active when you're resting, dreaming or not focussing on the outside world, might interfere with the prefrontal cortex in chronic procrastinators. Chronic procrastinators in another 2016 study also tended to prefer immediate rewards to delayed ones in behavioral tests, and showed lags in a particular kind of brainwave while making their choice. That, the researchers behind the study said, showed that they might be "more impulsive" and process the information about delaying a reward more slowly than non-procrastinators.

Incidentally, if you believe you flourish under pressure, you're actually just mixing up your signals. "A lot of people believe they work better under a deadline, but think about it from the perspective of limbic biology," Bailey tells Bustle. "Initially, writing that report was the animal that wanted to eat you, but when the deadline is tomorrow, the deadline becomes the animal. The fear gets shifted around." You're still being motivated by the limbic system, rather than letting your prefrontal cortex conquer your emotions about the task at hand.

Research has shown that in chronic procrastinators the volume of the amygdala is larger than normal, indicating that it may have more power over decision-making, and that the amygdala is less connected to the dorsal anterior cingulate cortex, which helps regulate the amydala's reactions. However, if you seem to procrastinate regularly, there's actually a way to shift your brain structure to help, Dr. Pychyl tells Bustle. "Eight weeks of mindfulness meditation actually shrinks the size of the amygdala. Mindfulness can shrink the amygdala volume and change the neural connections to the prefrontal cortex," he says. As you practice mindfulness, which emphasizes attention and focus, you may be able to make your brain more capable of overruling the limbic system, and get more done in the process.

Whether you practice mindfulness or not, procrastination's roots in the brain reveal that it can be tackled without needing a complete change in personality or attitude. Next time you feel the push to put something at the bottom of the to-do pile, recognize that it's not your lack of willpower; it's your emotional brain rearing up and demanding control over your actions.