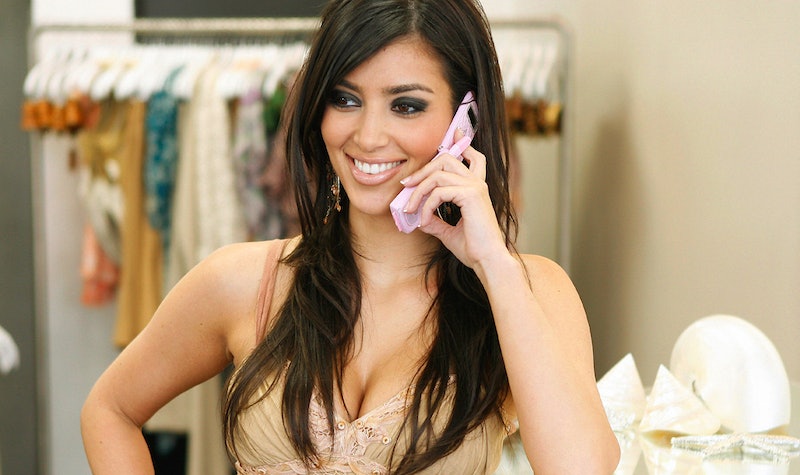 Jackie Bellando's cellphone is a conversation starter at bars. It's a Verizon Kyocera, one of the only flip phones that her local Verizon store carried when she gave up her smartphone in December 2018.

"I have met a couple of people just because they asked me, 'Why are you using that?'" Bellando, 28, tells Bustle. Bellando made the switch after realizing how much smartphones — and the social media apps they encourage people to use — felt designed to get users to interact with them as much as possible. "Companies profit off of the amount of time we spend on them," she says.

The Pew Research Center found in 2018 that 77% of Americans use smartphones, which is up from 35% in 2011. As smartphones have become the norm, concerns about their use have also grown. Smartphone use has been linked to anxiety and depression in young people, according to one 2019 study, and experts say notifications from apps make people more distracted and shorten attention spans. Flexible jobs where people keep their work email on their phones have also led to "always-on" stress. The infinite scroll feature on Facebook, Instagram, and Twitter was literally designed to be habit forming, the BBC reported.

Sacha Zilkha, Ph.D., a therapist with Alma, a community for mental health professionals, tells Bustle that each time we get a notification, our brains produce the "feel good" hormone dopamine. "It's the same pathway that happens when someone uses a drug," she says.

The research on how smartphones impact our interpersonal relationships is particularly troubling. One poll of more than 3,000 people by Digital Detox, a company that researches tech dependence and organizes device-free retreats, found that nearly half of respondents age 18-54 have had their partners or friends call them out for their phone use, per findings emailed to Bustle. That number is higher — 51% — for people ages 25-34.

Forest Bronzan, the company's CEO, points out that 17% of adults 18 to 54 reported checking their phone while they're having sex, and 78% of people in that age group reported checking or pretending to check their phones to avoid talking to someone. "They'll pretend to check their phone just to not have a human interaction, and that's scary — feeling like you have to go to this device because you don't know how to have a conversation or interact with someone," Bronzan tells Bustle.

The algorithms select for the stuff that makes you feel the sh*ttiest.

A growing awareness of that disconnect has led more people to ditch their smartphones. Jake Howell, 30, gave up his in June 2018. He tells Bustle using it "felt a bit like a slot machine — constantly pulling down on my social media feeds to see if anything good or interesting would appear," but nothing ever did.

Lisa Wells, 37, says she switched to a flip phone in May 2019 because constant access to email hurt her attention span. Social media apps were also detrimental to her mental health, in part because of how they can surface negative content. "We know that fear and anger increase user engagement — meaning they generate more profit — and that the algorithms select for the stuff that makes you feel the sh*ttiest," she says.

Zilkha, who specializes in treating anxiety and addictive behaviors, tells Bustle that people are often drawn to negative content naturally because it piques their interest. "Sometimes emotionally charged content is hard for us to pull ourselves away from," she says. When we get in arguments with friends and family, for example, it might be hard to end the argument even if that's what would be most rational, because our emotions become heightened and "ramp us up," she says.

Since giving up her smartphone, Bellando, who works for a STEM nonprofit, has seen changes in her anxiety and depression, though she also attends therapy and meditates. "Getting off social media and not constantly comparing myself to other people, whether it's friends or influencers, and not constantly having a hundred people's stories in my head is definitely a positive," she says. "My mind has more room to be quiet and to be a bit bored than it used to." She notes that a number of studies have found that boredom improves creativity and mental health.

At the same time, however, she says not having a smartphone has also made her more isolated. On the subway in New York City, where she lives, she often looks up and sees that she is the only person not looking at a smartphone. "I got lost a couple of times in the city, and I had to learn to trust my instincts ... to figure out where I was," she says.

It's felt so slow and so peaceful.

Wells says she's been a lot more mindful without a smartphone. "I'm way more attentive to the world and to the people around me because I'm not constantly tempted to reach into my pocket and look at my phone," she says.

But neither Wells nor Bellando have totally cut the cord. Wells says she uses hers to access Instagram — "the social media platform that seems to have the least heinous affect on my mental health" — using Wi-Fi. As a writer, she also says that some social media presence helps her career. Bellando uses her iPhone 5C with Wi-Fi to access the meditation app Headspace, which she uses daily. She also uses dating apps sometimes, but she sticks to a strict hour-long time limit.

Howell, a copywriter, returned to having a smartphone in June 2019 to help his wife plan their honeymoon. "It felt not right to burden my wife with the digital responsibilities of travel," he says. But going without a smartphone for a year has made him use apps "far less."

But people shouldn't feel bad about overusing their smartphones, Zilkha says. "You want to keep an eye on it, and you want to notice if it's negatively impacting your life," she says. If friends or family ask you why you're on your phone all the time, you might want to consider setting more firm boundaries for your phone use.

As people become more aware of the impacts of smartphone overuse, tech companies are creating more apps to help users limit themselves. Instagram now has a "daily reminder" feature that allows users to ask the app to alert them when they've been on Instagram for a certain amount of time. Google has also created "Digital Wellbeing" tools for Android, which allow people to see how often they check their phone and set limits for their app use.

Now, Bellando takes pride in sitting down to dinner without her phone or laptop to entertain her. "I'll be like, 'Oh my gosh, 20 minutes has just passed, and it's felt so slow and so peaceful,'" she says. She's learned not to be "in everybody's life" all the time through social media, because her real life — eating dinner, being quiet, or doing nothing — is what's actually happening in front of her. "I feel like I had been distracted from it for so long."