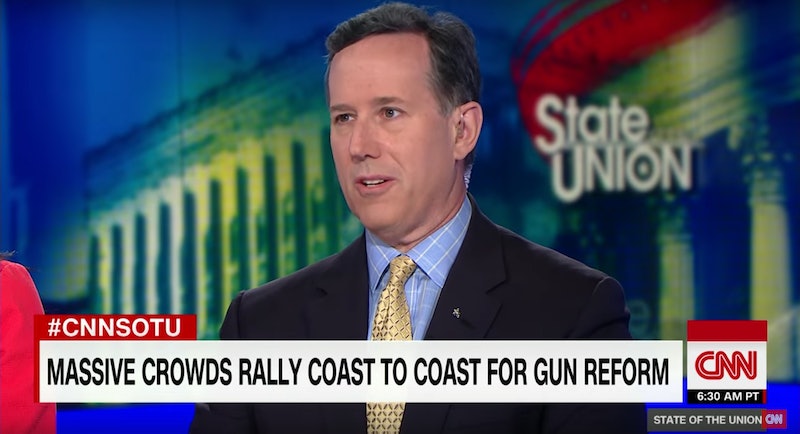 Twitter was ablaze in rage Sunday after Rick Santorum criticized student gun control protesters and suggested their time was better spent preparing for active shooter situations and learning CPR. This came the day after the March for Our Lives, when as many as 800,000 people took to the streets of Washington, D.C., to demand stronger gun laws. Thousands more marched at sister rallies across the country.

Santorum argued that the teenage protestors and their supporters weren't doing anything to "actually help respond to a shooter" and belittled the march as "protesting and saying, 'Oh, someone else needs to pass a law to protect me.'" Santorum is a paid CNN commentator.

Santorum, a former Republican senator from Pennsylvania, made his comments on CNN's State of the Union. He said that the debate had to be "much broader":

How about kids instead of looking to someone else to solve their problem, do something about maybe taking CPR classes or trying to deal with situations that when there is a violent shooter that you can actually respond to that.

Twitter users pounced on the comments. California Lt. Gov. Gavin Newsom tweeted, "In a SHOCKING turn of events Rick Santorum proves to the world once again that he completely lacks any form of decency, intelligence, or common sense."

Rep. Ted Lieu, simply pointed out how ludicrous Santorum's advice was. "CPR is good for heart stoppage," Lieu posted. "Not good for victims of multiple AR-15 bullets, which typically impart 3 times the lethal energy upon impact than a 9mm handgun bullet. AR-15 bullets obliterate organs and cause so much bleeding that victims die very quickly."

Shannon Watts, the founder of Moms Demand Action, noted his past connections to gun lobbyists. "Rick Santorum — who thinks we should reactively revive the dead instead of proactively passing data-proven, lifesaving gun laws — had an A+ rating from the @NRA and took hundreds of thousands of dollars in campaign contributions from their lobbyists as a quid pro quo," Watts tweeted.

Santorum's insulting comments continued throughout the CNN discussion. "They took action to ask someone to pass a law," Santorum said, referring to the marchers. "They didn't take action to say, 'How do I, as an individual, deal with this problem? How am I going to do something about stopping bullying within my own community? What am I going to do to actually help respond to a shooter?'"

Santorum was also confronted on the program. Commentator Van Jones mentioned his own student would be starting high school soon. "I want him focused on algebra and other stuff," Jones said. "If his main way to survive high school is learning CPR so when his friends get shot ... that to me, we've gone too far. I'm proud of these kids. I know you're proud of these kids too."

Santorum did somewhat agree and say he was proud of the students, but then he immediately attacked them again.

"I think everyone should be responsible and deal with the problems that we have to confront in our lives," Santorum said. "And ignoring those problems and saying they're not going to come to me and saying some phony gun law is gonna solve it. Phony gun laws don't solve these problems."

It wasn't just politicians who took offense at Santorum's comments. One medical doctor, Eugene Gu, a surgeon, set the record straight, "As a surgeon, I’ve operated on gunshot victims who’ve had bullets tear through their intestines, cut through their spinal cord, and pulverize their kidneys and liver. Rick Santorum telling kids to shut up and take CPR classes is simply unconscionable."

Santorum may just be offended at the March for Our Lives organizers' disregard for politicians offering their thoughts and prayers following tragedies. Santorum literally had a prayer team during his 2016 presidential campaign, which not even CPR could have saved.