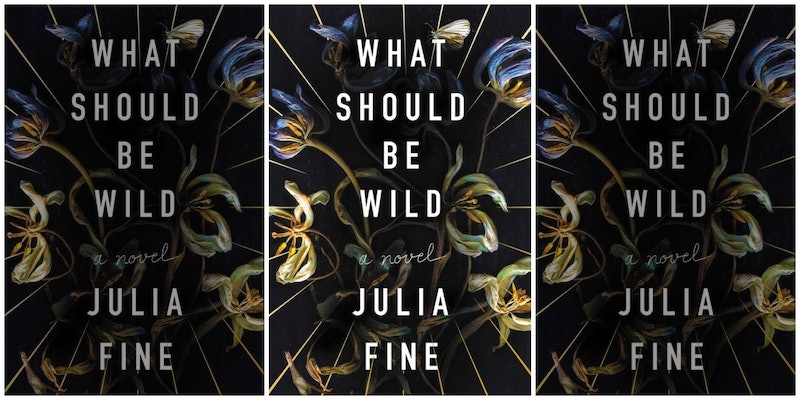 The female body is a curious and powerful thing, capable of bringing life into the world, of making food for hungry babies, of having multiple orgasms in a row. But it's also a battleground, one where women are forced to fight for the autonomy over their own physical forms against a society hell-bent on controlling them, and against their own desires and instincts. It's a subject that fairy tales, both classic and modern, often explore in an attempt to better understand womanhood and the female experience, and it's at the very heart of Julia Fine's bewitching debut, What Should Be Wild.

A darkly enchanting coming-of-age story, What Should Be Wild centers around Maisie Cothay, a young woman cursed from birth with the ability to kill or revive any living thing with a single touch, including the mother she inadvertently murders in utero. Left to raise the strange girl on his own, Maisie's anthropologist father Peter makes it his life work to study his daughter's incredible ability to control life, convinced it is the key to unlocking the secrets of his deceased wife's bedeviled bloodline. It is in her ancestral home Urizon — a grand old manor set on the edge of a mysterious forest where, for more than a Millennium, Maisie's female relatives have vanished into the wood — the young girl learns to life with her affliction by adhering to a strict set of rules set out by her father. Her skin is to stay mostly covered at all times, especially her hands, arms, and feet. She is not to touch a living thing to kill it, nor is she to touch a dead thing to revive it. She isn't to talk to strangers or leave the property without supervision from her father or their elderly housekeeper, and she most certainly is never, ever supposed to enter the forest that looms just at the edge of Urizon.

But when her father goes missing and leaves nothing but a strange map as a clue to where he has gone, Maisie is forced to leave the shelter of her carefully planned life and embark on a dangerous mission to save Peter. With the help of a family friend, she ventures into the real world, where she must learn not only how to protect those around her from her strange gift, but how to protect herself from them. As her search brings her closer and closer to the dark forest she was told never to enter, Maise begins to slowly unravel the centuries-old mystery of her cursed bloodline, the circumstances of her mother's death, the secrets of the wood, and the truth within her own body.

What Should Be Wild by Julia Fine, $21, Amazon

A hypnotizing fairy tale that explores what it's like to live life in an unruly female body that everyone around it insists on controlling, What Should Be Wild pulsates with originality, curiosity, terror, and pleasure. With gorgeously distinct chapters that alternate between Maisie's story in the present and her ancestor's stories in the past, Fine has created layered narrative about growing up girl and becoming woman in a world that sees your physical form as a wild threat.

Maisie, a "baby born from death," must reckon with the power of her body from the moment she enters the world. Her family's curse make her physical form literally deadly, but more broadly, Maisie's struggle for control over it serves as a parable for a female experience that is common to so many readers: the awakening of sexuality, the thirst for knowledge and real-world experience, the growing pains of transitioning from girl to woman. For so many, coming to terms with female desire is a truly terrifying experience, especially if you don't know how to navigate the place it resides.

"There was a badness in my body that had cursed me," Maisie says early on in the novel, talking her own deadly skin but speaking for any girl who has ever felt the stirring of passion, lust, or sensuality within them. In a world where women are told how to act in their bodies, what to dress them up in, how to present to the world, what to do with them during pregnancy and after childbirth, we are all at risk of being like Maisie, confused and unable to trust what is in our own hearts, minds, and bodies.

As Maisie puts it:

"I did not trust my instincts. It was safer to heed Peter. I thought that if I tried very hard to do exactly what he asked of me, my father would forgive me all my failings. I forced myself to sit and smile and each time I felt an impulse I would fold it in my mind, a sheet of paper that creased easily at first, and then required more muscle as desire took on thicker, complex layers."

For so many readers, the experience of folding and refolding desires to keep them suppressed will feel all too familiar. We might all be driven by a desire for human connection — "All humans crave touch, the fundamental feeling that life burns inside another," Maisie says — but like the cursed young woman with the touch of death, women are told to keep that desire in constant check. But what happens when the get too great to ignore, too strong to stifle?

Like so many girls caught somewhere in between the child they were and the woman they long to be, Maisie struggles to come to terms with the behaviors she was taught to have, and ones her body is urging her to act on. In Urizon, under the watchful eye of her father, she had constant checks for herself and her unpredictable body. Outside of the family estate, in the real world and away from her keeper, Maisie must rely on herself and learn to trust her own instincts. After a lifetime of being told to ignore them, to keep them at bay lest she give in to temptation and cause serious harm, it's nearly impossible.

“My body seemed to want it, but my body could never be trusted," a sentiment Maisie says about herself, but one that so many women can relate to. "My body was a wild thing I had tamed into submission, and yet part of me knew at any second it might lash out, it might fight me.”

Dark, violent, and yet still so full of wonder and beauty, What Should Be Wild is spellbinding fairy tale that gets at the heart of living life in a female body.

More like this
Romance Authors Are Mobilizing For Reproductive Rights
By Natalia Perez-Gonzalez
Aemond Targaryen's Fate On 'House Of The Dragon' Is Full Of Revenge In The Book
By Grace Wehniainen
This Episode 6 Moment Foreshadows Viserys' Fate On 'House Of The Dragon'
By Grace Wehniainen
Ling Ma Is Back — This Time, With Yetis
By Kate Dwyer
Get Even More From Bustle — Sign Up For The Newsletter