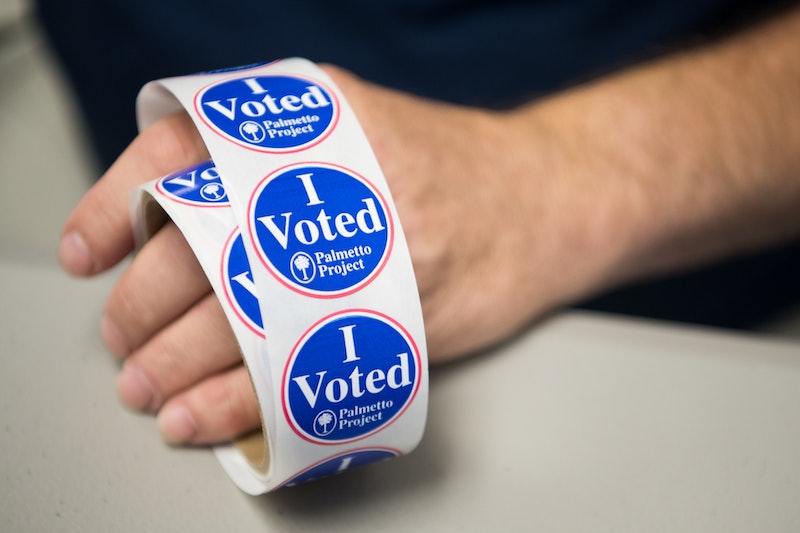 There's nothing more disappointing than taking the time to educate yourself about the candidates and issues on the ballot and arriving at your local polling place on Election Day only to be told that they can't find you in the voter roster. But if you know you're a registered voter, then having your name left off the voter roster doesn't mean your vote won't be counted. In fact, there's no need to panic. If you find your name isn't on the voter roster at your polling place on Election Day — you can cast a provisional ballot.

Each polling place is given its own list detailing the names of individuals registered to vote in that area. These are known as the voter rosters or, in some cases, the voter lists, and they help poll workers keep track of eligible voters as they cast their ballots on Election Day. That being said, they're not foolproof. Earlier this year, for example, the names of more than 118,000 voters were accidentally left off of voting rosters in Los Angeles County.

First, you can use these handy resources at either Vote.org or RockTheVote.com to check and be sure that you are in fact registered to vote. In many states, the fact that you submitted a voter registration application doesn't necessarily mean you're a registered voter. Rather, the election officials in your state will need to verify the information you submitted before you can be registered. While procedures can differ from state to state, most should notify you about the status of your registration application. But if you can't remember getting a confirmation (no judgement, I can barely remember my own age), it's a good idea to check before heading to the polls.

It's also a good idea to check where your local designated polling place is before heading out to cast your vote. Not only can polling places be moved, but there have also been instances where voters were given incorrect information about where to vote. You can check your polling place in under a minute with Vote.org's "Find Your Polling Place" tool. Simply enter the address at which you're registered to vote and the polling locator will find not just the street address of your designated polling place, but the hours it will be open as well.

But if, for whatever reason, you're told that your name isn't on the voter roster, you have the right to ask for a provisional ballot. Known as challenge ballots or affidavit ballots in some states, provisional ballots work as a fail-safe to ensure that no eligible voters are shut out from the voting process. In fact, access to provisional ballots is mandated by federal law, according to the National Conference of State Legislators.

While both the voting process and election laws can vary by state, in most cases provisional ballots are handed over for counting separately from the "regular" ballots cast. Election officials then review the information provided on each provisional ballot to determine voter eligibility. If the provisional ballot is found to have been cast by an eligible voter, it's counted.

As a handful of states (I'm looking at you, Arkansas, Georgia, New York, Ohio, and Virginia) have moved to "clean up" their voter rolls by purging names, it's become more important than ever to check your voter registration information and educate yourself about election laws before heading to the polls on Election Day. You can find more detailed information regarding how each state handles provisional ballots with the National Conference of State Legislators.