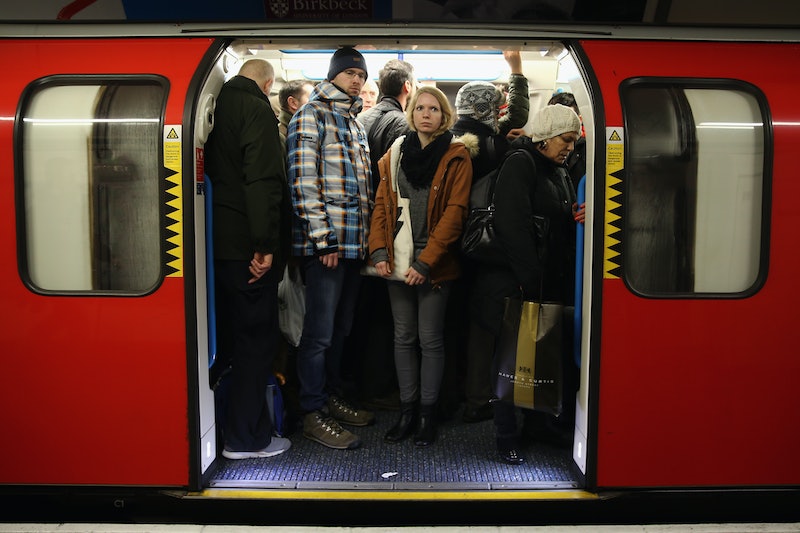 Picture this: You're on your daily commute to work, fully concentrating on your podcast, when, out of the corner of your eye, you notice someone near you with their face scrunched up, eyes watering, trying their hardest not to cough until they lose the battle and let loose in your general direction. You're not sure if they coughed on you, but with this flu season, you don't want to take any chances. Fortunately, science has some answers on what you should do if someone coughs on you to avoid getting sick.

"We know the flu bug isn’t very resilient once it is outside your body," Lisa Yakas, a microbiologist and Senior Certification Project Manager at NSF International, tells Bustle. "Studies have shown that it generally only lives for a few minutes to a few hours." Therefore, staying out of the way of someone else's cough or sneeze, as well as keeping your hands away from surfaces airborne germs could have come into contact with, is your first line of defense for not contracting an illness. But what else can you do, proactively, to avoid getting sick?

Your number-one thing to do to not get sick, particularly with the flu, is to get your flu shot. If it's available and recommended for you, as it is for the vast majority of people over the age of 18 months, you should get the flu vaccine every year. A 2015 study noted that college students who were popular should be among the first to consider getting a jab, both because they'd influence others, and because they were more likely than introverts to spread flu viruses. Getting a flu vaccine every year is necessary because flu strains differ between seasons, and new antibodies are continually being developed to help refine the medical community's response to the threat of flu. It's also not too late to get your shot, if you haven't yet — the CDC predicts that flu season could go through March of 2018. While flu vaccines aren't completely effective — the CDC emphasizes that this year's vaccine is only around 10 percent effective — it's a necessary addition to your immune system's arsenal to help it get through.

Another thing you can do to prevent yourself from contracting the flu is to wear a mask when you're out in public. A 2013 study from the University of Maryland into the spread of contagious colds and flu found that face masks are actually effective at keeping contagion down when used on ill patients, but of course it will block the entrance of cold and flu germs into your system if you wear one while healthy. It was one of the first major studies on whether sterile surgical masks can be used to combat flu's "aerosol shedding" — the transmission of flu particles through the air, usually through sneezing and coughing, but also breathing — and found that flu patients were significantly less likely to infect those around them if they wore surgical masks regularly; the amount of virus spread reduced by 3.4 fold overall. It might get you strange looks, but wearing a mask if you're ill yourself, or enforcing a mask on an ill person who's in your vicinity, could save everybody's immune system some bother.

If you haven't been able to take these preventative measures, there are still things you can do to keep illness at bay. Got some hand sanitizer in your purse? If not, get some, pronto. Research notes that hand sanitizers are more effective at preventing the spread of infection and contagious viruses than simple soap and water: A 2010 study from the American Society for Microbiology, for instance, found that hand sanitizers dramatically reduce the spread of rhinovirus for up to four hours after they're used. If you've interacted with somebody who's ill, disinfect your hands and anything they might have touched (or sneezed on), and continue to use it in public areas during times when illnesses are at their height.

Once you're at home, there are some science-approved ways to support your immune system to give yourself a better chance of fighting off the cold or flu. We're increasingly learning that humidity can have a big influence on the spread of the flu and cold diseases, and that central heating and air conditioning, by drying out the air, can help spread illnesses. A 2015 study from Virginia Tech noted that the drier the air, the more preserved and effective virus "droplets" become. If humidity is over 50 percent and under 98 percent, viruses have a much lower rate of survival in the air. However, saunas and other humid spaces are also confined, making them problematic places if you happen to be inside one with a sneezing person. Keep your living and working spaces as humid as you can, but also use ventilation if possible.

And here's one you probably didn't realize could help your immune system: A fascinating study published in 2017 in Nature found that the presence of certain lactic acids in the gut appeared to have a valuable role in protecting the body against influenza viruses. The lactic acid the scientists were using was a strain called Lactobacillus casei DK128, which they isolated from the Korean fermented vegetable delicacy kimchi. They used a version of it on mice and found it was actually pretty effective in fighting flu. Kimchi and other fermented foods are enjoying a vogue right now, and aiding the immune system in the fight against flu viruses is yet another reason to add them to your menu.

Finally, if you feel yourself getting the flu, it doesn't hurt to get yourself to a doctor. If the flu is in its early stages, antiviral medication can help lessen the severity of the illness. Then, if you do find yourself having become ill, stay home from work, wear a mask — basically, do unto others as you'd want them to have done unto you in the first place. But until then, there are other methods suggested by scientific studies that can prove effective for keeping your health intact, and don't require you to go around in a hermetically sealed space suit. That's pretty anti-social, anyway.