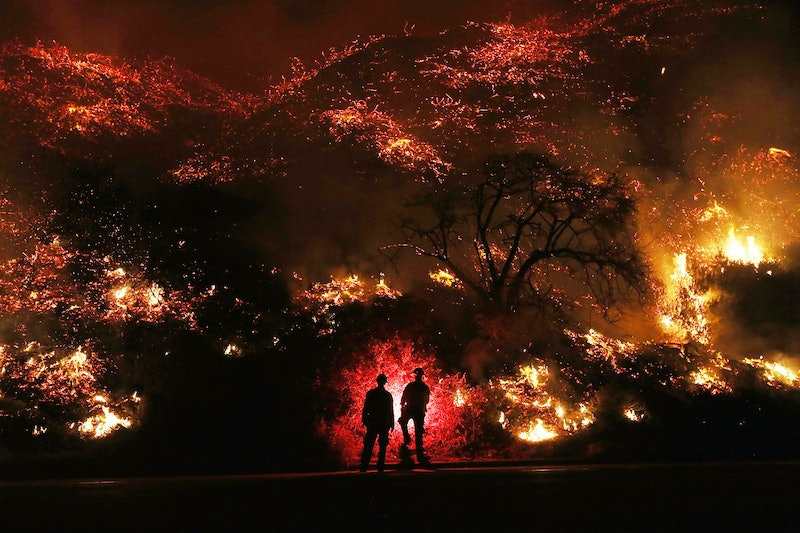 From Ventura to Valencia, Southern California is dealing with a host of wildfires. USA Today reported that the biggest wildfire in the region started in Santa Paula on Monday evening, but there is now a bigger, faster-moving fire in Ojai. There are also fires in Los Angeles, San Bernardino, and other cities in the vicinity. The Santa Ana winds are famous for fueling wildfires like these, but what started the Southern California wildfires?

According to WIRED, Southern California has been fire-prone for a long time. The transverse mountain ranges in the Los Angeles region are a broken fragment of a tectonic plate that traps cool coastal air. This phenomenon, combined with the growth of Los Angeles and the persistent Santa Ana winds, create ideal conditions for wildfires. The Santa Ana winds have reached speeds of 45 to 50 miles per hour, and they're pushing dry air from inland California out toward the Pacific, thereby reversing normal weather patterns.

"Every single year, we have ideal conditions for the types of wildfires we're experiencing," Syphard said. "What we don't have every single year is an ignition during a wind event. And we've had several."

The "ignition" to which Syphard referred is the growing presence of people in particularly fire-prone places, such as Ventura and Bel-Air. This, coupled with the expansion of Los Angeles over the years, has made Southern California a tinderbox.

The canyons created by the Southern California transverse mountain ranges are a perfect place for wildfires to start, and the delayed arrival of rainfall in the region means that the fire season has been drawn out. John Abatzoglou, an associate professor of geography and climate at the University of Idaho, told The Atlantic that the fires' immediate cause is not necessarily climate change.

"[T]he big anomaly here is the delay in the onset of precipitation for the southland that has kept the vegetation dry and fire-prone," Abatzoglou said.

So where is Southern California's seasonal rainfall? A weak La Niña in the tropical Pacific is preventing storms from making landfall in the region, which explains the delay in precipitation that Abatzoglou described to The Atlantic:

Once [autumn] rains hit the region, fuel moistures recover and make the landscape fire-resistant, thus reducing the odds that a power-line failure or vehicle will start a fire. So far this autumn, much of the southern half of California is pitching a shutout in terms of rainfall to date. Some of this is characteristic of La Niña ... as the southern tier of the United States sees less precipitation during La Niña winters.

The Los Angeles Times reported that high-speed winds are not only helping existing fires spread, but also generating new ones. The Santa Ana winds have already spread a number of fires across California this year, including those that struck Napa and Sonoma counties, but as WIRED pointed out, these fires were unusual for Northern California. These winds also have a significant impact on firefighters who are currently battling the wildfires, according to Ken Pimlott, director of the California Department of Forestry and Fire Protection.

"There will be no ability to fight fire in these kinds of winds," Pimlott told the LA Times. "At the end of the day, we need everyone in the public to listen and pay attention. This is not 'watch the news and go about your day.' This is pay attention minute by minute … keep your head on a swivel."

As of Wednesday evening, the biggest fire in Southern California — the Thomas fire in Ventura County — was only 5 percent contained.