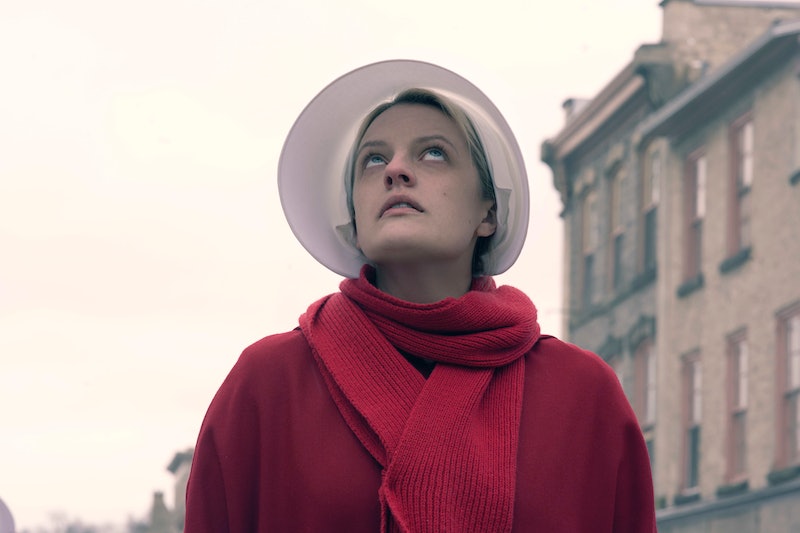 Spoilers for The Handmaid's Tale Season 3 ahead. Early on in Season 3, there are rumblings about some kind of conflict happening in Chicago. Nick, who has been promoted to Commander, is even sent to the front to fight. His departure is a stark reminder that not all American states are part of Gilead in The Handmaid's Tale. The Hulu series is expanding on Margaret Atwood's world in the third season, and actually explaining where everything is supposed to be.

Since the publication of Atwood's text, there have been several fan-made maps speculating about where the Colonies are and how many states make up Gilead. We know from the book and the early seasons of the television series that June's story takes place primarily in and around Boston. We also know that what's left of the United States government fled to Alaska and that Hawaii is untouched as well. Remember that hot guy who wanted to run away with Serena Joy to Honolulu? Fingers crossed that he comes back.

Back to geography, a weeks before the Season 3 premiere, the official Handmaid's Tale Twitter account shared a map of the disputed regions in Gilead. As June reminds us via voiceover, the rebellion does not officially exist, so this map is highly classified — as well as concrete evidence for which states are and are not part of Gilead. It matches one that you could glimpse out of focus in Season 2 as well.

Not only does this map distinguish between districts that are loyal to Gilead, occupied by rebels, or currently under conflict, it also gives names to these colonies/regions. They're primarily directional as you can see, with the exception of New England, which has been renamed New Gilead. Of course. Let's break down exactly which states are which, now:

That's much further from Boston than most readers have guessed when Emily was sent to work there, and such a shame that a region of the United States with such stunningly beautiful wildlife was devastated by a nuclear civil war.

While there are rebel-occupied pockets in several of the states listed as either part of Gilead or the Colonies, the rest of the country is either completely occupied by rebels or under conflict.

Of the above, Florida is the only state that looks to be completely rebel-occupied, which is... honestly impressive for the Sunshine State.

The map doesn't list Hawaii or Alaska, so it's unclear whether Gilead would call those states "rebel-occupied" or something else entirely if the US Government-In-Exile has set up shop there. The map does not share where in Ontario, Canada refugees have taken up and created "Little America," either, but it's probably near or part of Toronto based on context clues in the series.

Will we ever get to see more of these areas on The Handmaid's Tale? If the show follows Nick to Chicago, we might. Until then, this map may be the only information available — but provides a lot of hope. Gilead will eventually fall, and thanks to states like Florida it may have already started.

More like this
'Stranger Things' Fans Are Begging For Steve To Live For The Funniest Reasons
By Grace Wehniainen
'Stranger Things' Season 4 Volume 2 Trailer Teases New Episodes Coming July 1
By Grace Wehniainen and Gabrielle Bondi
'The Summer I Turned Pretty' Book Ending Is An Emotional Rollercoaster
By K.W. Colyard
The Future Of 'All Creatures Great & Small' Is Confirmed & Wedding Bells Are Ringing
By Rebecca Fearn and Frances Stewart
Get Even More From Bustle — Sign Up For The Newsletter