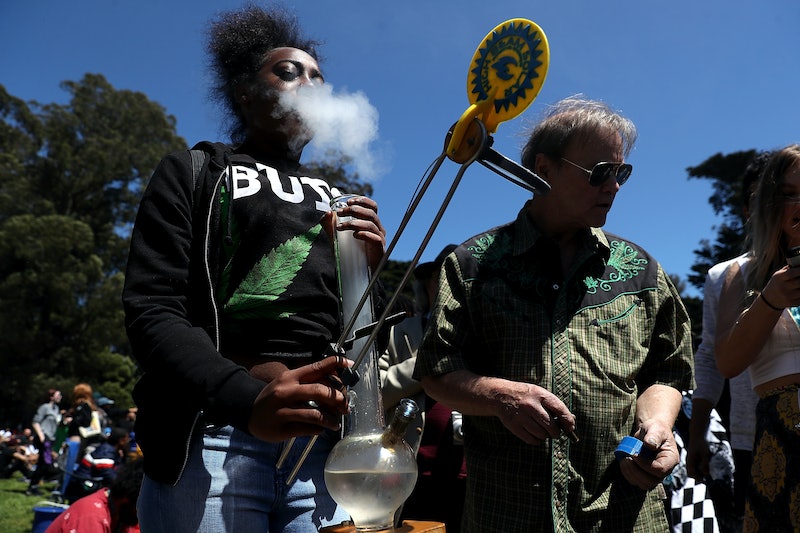 In recent months, it seems that legislative pushes to decriminalize marijuana are becoming increasingly common across the country. In light of these initiatives, many Americans are probably wondering what states have decriminalized weed. As it turns out, dozens of states nationwide have reduced criminal penalties for cannabis possession to some extent.

According to Business Insider, over 10 states and Washington D.C. have fully legalized marijuana, which means it's both decriminalized as well as legal to use recreationally. The places in which marijuana use is fully legal in the United States include:

A host of other states have also significantly reduced penalties for recreational weed use but have not moved toward fully legalizing weed just yet. Instead, these states have decriminalized the possession of certain amounts of marijuana. Notably, as the Marijuana Policy Project (MPP) described, in many of these states, individuals are fined and charged with a civil infraction if they are found in possession of a small amount of marijuana for the first time, but they aren't arrested. The list of states that have some marijuana decriminalization laws in place is as follows:

The state decriminalized marijuana in 2011. Adult possession of up to half an ounce of marijuana isn’t a criminal offense, though it does incur a $150 fine, NORML indicated.

Delaware passed a marijuana decriminalization law in 2015. Adults who are found in possession of one ounce or less of marijuana receive a civil (not criminal) infraction and a $100 fine, according to NBC 10 News.

Hawaii (Goes Into Effect In January 2020)

Hawaii decriminalized cannabis in July 2019, according to Vox. Possession of up to three grams of marijuana will be punishable by a $130 fine — but no jail time — when the law goes into effect, the outlet noted.

According to the Star Tribune, Minnesota decriminalized marijuana all the way back in 1976. The outlet noted that recreational cannabis possession of 42.5 grams or less is classified as a petty misdemeanor subject to a fine and potential drug education courses.

Mississippi also decriminalized cannabis quite some time ago — in 1978, NORML reported. Possession of up to 30 grams of marijuana is punishable by a fine of $250 or less, ECHO Connection indicated.

According to the Marijuana Policy Project, reforms enacted in Missouri in 2017 made a first offense of possession of 10 grams or less of marijuana a Class D misdemeanor that "carries a fine of $250-$1,000 with no jail time."

Nebraska decriminalized first-time possession of up to an ounce of marijuana in 1979, making it a civil infraction as opposed to a criminal offense, the Marijuana Policy Project and the Daily Nebraskan reported.

According to Forbes, New Hampshire decriminalized marijuana in 2017. The outlet noted that state laws dictate that those found possessing up to three-quarters of an ounce of marijuana can receive fines for their first through third offenses in a three-year period. Individuals caught possessing marijuana for a fourth time in this time period can be charged with a misdemeanor, Forbes added.

New Mexico's marijuana decriminalization reforms took effect in July 2019, Vox reported. The outlet noted that individuals found in possession of less than half an ounce of cannabis are subject to a $50 fine but no prison time.

The state of New York first decriminalized possession of up to 25 grams of cannabis in 1977, the New York Times reported. The state's legislature passed further decriminalization reforms in June 2019.

North Carolina similarly decriminalized marijuana in 1977, with those found in possession of less than half an ounce of the substance subject to a fine of up to $200, FindLaw noted.

According to CFN Media Group, Ohio decriminalized marijuana in 1975, making possession of up to 100 grams a misdemeanor with a maximum $150 fine.

NORML indicated that Rhode Island's marijuana decriminalization law went into effect in 2013. The law dictates that adult possession of up to an ounce of cannabis is a civil offense subject to a fine of $150 or less.

Of course, in addition to these states, there are also others in which residents can legally obtain marijuana for medicinal purposes but not possess it for any other reason, the National Cannabis Industry Association noted. And then, in a host of other states, marijuana possession is completely illegal, regardless of its purpose.

According to the MPP, states choose to decriminalize marijuana for a variety of reasons, including diminishing the amount of state resources used to pursue marijuana arrests and convictions. "Decriminalization laws avoid imposing harsh punishments for possessing a substance that is safer than alcohol, while freeing up law enforcement to focus on serious crimes," the MPP wrote on its website.

Moreover, as Vox described, marijuana legalization and decriminalization vastly reduces the number of people who will spend time in prison for marijuana-related charges. As the outlet indicated, thousands of people are arrested in the United States for weed charges every year, and those arrested are disproportionately African American, despite the fact that white and black people use marijuana at roughly the same rate. So, as Vox explained, legalizing and decriminalizing marijuana can help reduce racially-driven arrests for marijuana usage.

Finally, for states that move to full legalization, marijuana can also be incredibly profitable. As Forbes noted, many states plan to use revenue from cannabis taxes to fund infrastructure projects, including road renovations and school construction. Additionally, states are hopeful that a growing cannabis industry could create more jobs and economic opportunity within their borders, the outlet reported. For example, Nick Kovacevich of Forbes noted that the University of Illinois found that "the [hypothetical] taxation and regulation of cannabis [in Illinois] could create nearly 24,000 new jobs and generate over $500 million in new revenue for that state."

As several states' recent moves toward decriminalization illustrate, it's clear that many legislators are taking serious steps to change the way that cannabis use is addressed. And as new marijuana laws continue to be implemented, it will be interesting to see whether more states follow suit and further loosen marijuana regulations around the country.

This article was originally published on April 20, 2019