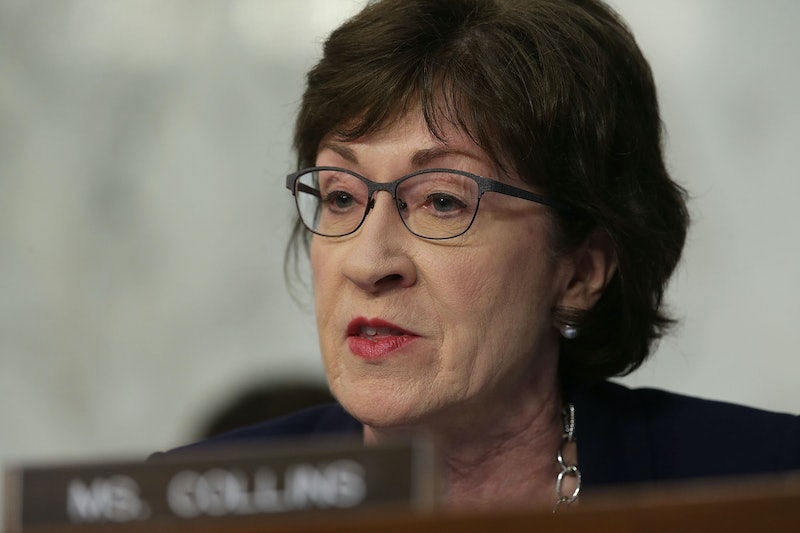 Following a Senate subcommittee hearing on Tuesday, a private conversation between two senators was broadcasted when one senator did not turn her microphone off. Republican Sen. Susan Collins, who has been one of the GOP's most fervent dissenters on the Senate health care plan, was heard speaking with Democratic Sen. Jack Reed about their fears for the ongoing budget process, their opinion that Trump is "crazy," and their belief that he understands very little about the political processes he is at the head of.

Collins is chairman of the Senate Transportation, Housing and Urban Development, and Related Agencies subcommittee of the Senate Appropriations Committee, which was meeting on Tuesday to approve funding for the agencies it oversees. After the meeting, Collins reportedly did not turn her microphone off before turning to her colleague for a very candid conversation about Trump and other lawmakers.

Collins and Reed discussed their disapproval of how the Office of Management and Budget was going about the budget process, saying they seemed to be chopping items without discretion or explanation. They then turned their attention to Trump, with Reed saying that he thinks he is "crazy," and Collins agreeing, saying that she is "worried," and both commenting that they don't believe Trump knows much about how the governmental budgeting process works. Their conversation was transcribed in the Washington Post.

“I think — I think he’s crazy,” Reed said, apparently referring to the president. “I mean, I don’t say that lightly and as a kind of a goofy guy.”

“Oof,” Reed continues. “You know, this thing — if we don’t get a budget deal, we’re going to be paralyzed.”

“I don’t think he knows there is a [Budget Control Act] or anything,” Collins says, referring to a 2011 law that defines the budget process.

The conversation then turned to the Republican congressman who said on Monday that if Collins were a man, he might challenge her to a duel over their conflicting opinions on health care legislation. Rep. Blake Farenthold of Texas said in a radio interview, “if it was a guy from south Texas, I might ask him to step outside and settle this Aaron Burr-style.”

Collins brings up the duel comment to Reed, who replies that Farenthold chose a duel because he knows she would beat him in an actual fight. Collins replied, “Well, he’s huge. And he — I don’t mean to be unkind, but he’s so unattractive it’s unbelievable.”

It seems that Farenthold and Collins have since both offered apologies to one another for their insults. Hearing candid conversations between politicians is often enjoyable for the public, but it could spell trouble for Collins and Reed. It stands to be seen whether the two will face any ramifications for their frank evaluations of Trump's competency.