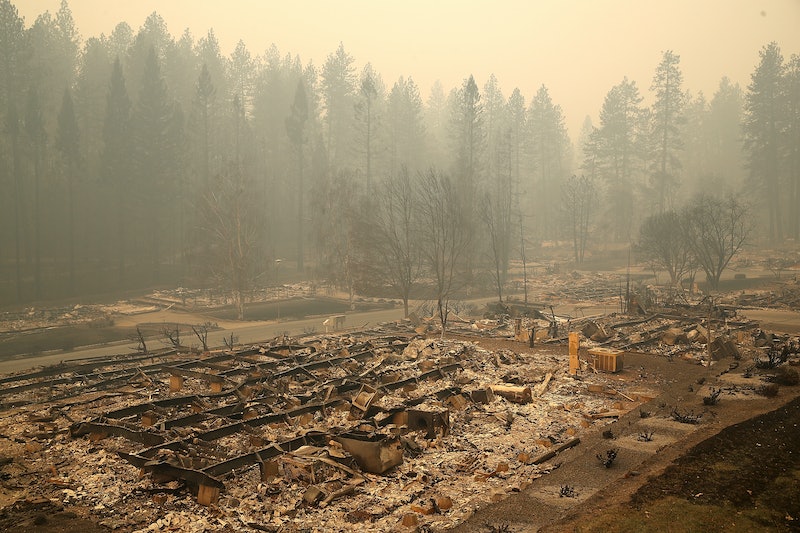 The fires ravaging California are the most deadly ever — and another 800 people are still missing. But the dangers from the fires can reach far beyond the scenes of charred homes and melted cars. Experts are warning about what the air quality in California means for you — and how you can use the Air Quality Index to protect yourself.

For many in California, like Dr. Anthony Wexler, director of the Air Quality Research Center at the University of California, Davis, the fires made a bad situation worse. Even on Wednesday — as rain started to move through the state, which would normally naturally clean the air — the measures for pollution in Davis were in the range considered "unhealthy" by the EPA.

Wexler tells Bustle that California traditionally has some of the worst air pollution in the country. "The real reason why it's worse here is that there are mountains that block the air flow," he says. In California, mountains block fresh air from coming in and pushing the air pollution elsewhere. Add wildfires to that and the situation gets much worse, very quickly. The city of Davis's score on Wednesday, a 172 on the EPA's Air Quality Index (AQI), rates as a red on the chart.

Laura Kate Bender, the national director of advocacy at the American Lung Association's Healthy Air Campaign tells Bustle that when the air quality "gets to red, that is definitely unhealthy." The EPA's scores go from 0 to 500 and "good" to "hazardous" — with each range getting a color.

"The way it is broken down is by color," Bender says. It goes from green, which is good, to maroon, which is hazardous. "When we start telling people to take precautions is when the air quality is orange," she says. That range is "unhealthy for sensitive groups," and Bender says most families have someone who falls into that category.

Anyone who's not in optimal health should definitely check with a physician about their specific case. Conditions that may cause concern are asthma and other lung diseases and cardiovascular diseases like high blood pressure, according to the American Lung Association. Anyone who has had a heart attack or stroke, as well as children and the elderly, should also take special precautions.

For healthy people, limiting strenuous activity should be good enough. You can still walk to the bus to commute to work, for example. But watch your symptoms. "If you are sensitive, it's good to be on the lookout," Bender tells Bustle. "If you notice shortness of breath, then you should be mindful and adjust your activities accordingly." Even short-term exposure can be problematic.

Ways you can mitigate the risks are first and foremost by staying indoors, both Wexler and Bender tell Bustle. Keep the windows shut and turn on a HEPA filter if you have one. Another good option is to turn on the central air in fan mode so that it circulates the air through the system's filter but does not draw in fresh air.

Masks are a bit more complicated. N95 or P100 masks can help if worn correctly. But, Wexler says, they only help if they're snug to your face, creating a seal. "Some people wear these and their glasses are fogging up," he tells Bustle. "Then the mask isn't doing anything."

The California fires deserve special precautions because they're not a normal wildfire, Wexler added. The UC Davis Air Quality Research Center measures air quality all across the country for the EPA and tests 80,000 filters a year.

They plan to do research on how specifically pollution from a fire like these affects the body, but for now it's safe to say these California fires are worse because than normal wildfires because they are "burning up homes — and a lot of homes." In the case of Paradise, an entire city.

That produces different pollutants than a "purely wooded forest fire," Wexler says. "The homes are made up of plastics, and people have all kinds of stuff in their homes that, when they burn, create all kinds of terrible, noxious fumes.

California may soon see relief. To check the Air Quality Index in your city, you can go to AirNow.gov, which is run by the EPA.