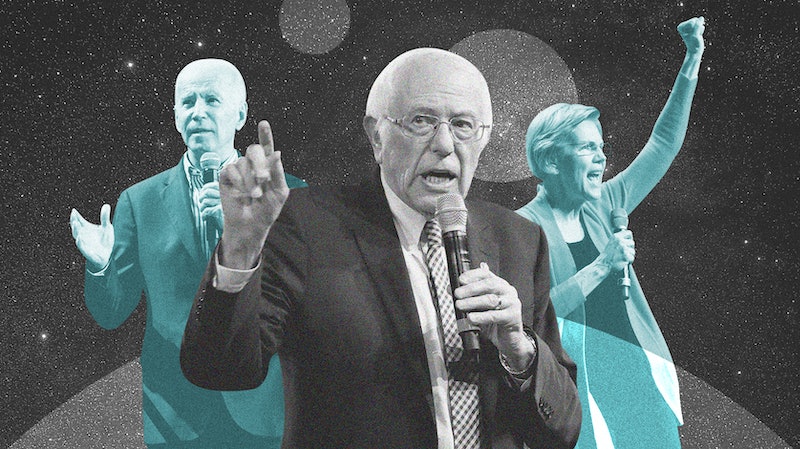 Let me preface this with: Please don’t shoot the messenger. As an astrologer, one of my duties is to look at the heavens, note their patterns, and see how they are reflected down here on Mother Earth. Whether it be personal, environmental, or even medical, if there’s a chart, there’s a story that’s unfolding. In this case, we’re looking at how Super Tuesday 2020 will affect each Democratic candidate based on their birth charts! What to expect, who will be the main contenders going forward, and who may have to consider dropping out of the race altogether.

While astrology can be accurate, this messenger is making it known that some of the birth times are missing from the candidates’ natal charts, which are important for accuracy and timing. However, without them, we’ll do our best to make sense of what’s happening up above and how it may impact them on the big night and for the rest of their campaign.

Funnily enough, Super Tuesday sky looks a lot like the Iowa Caucus that took place on Feb. 3, 2020. The Moon will be in the same sign of chatty and information-savvy Gemini until 11:26 p.m. and under the rulership of Mercury in Pisces retrograde. Interestingly, Mercury will be at 0° Pisces, which is exactly where it was the night of the Iowa Caucus. Now that could mean that much of the same activity will be an issue, but this time with Mercury retrograde, it could be more extreme in dysfunction, confusion, and malfunction of machines, possible missing votes, long lines, confused voters, and staff not knowing what’s going on. If the Democratic National Convention has managed to address the technical issues since Iowa, this can be mitigated with diligence and swift responses, but the rest of the sky does point toward a day of disorder with the Sun in Pisces approaching a conjunction with Neptune — the planet of dreams, illusion and distortion.

Whatever the results, by the time the Moon moves into Cancer just before 11:30 p.m. ET, they won’t go unnoticed as the Moon in this sign re-charges the energy of the eclipses we’ve been under most recently around Christmas 2019 and into January 2020. Something tells me that the days following Super Tuesday will have us all in an uproar that may have to re-visited once Mercury comes back around on March 16.

Now while all of this is happening remember that this is also influencing the Democratic candidates and their campaigns. Think of these current planetary movements called transits as cars passing on the highway of our lives. Some roads are smooth, some are bumpier and more difficult to navigate. Some are more strongly felt (based on proximity) versus others that can lose strength.

Sanders' chart is very busy on Super Tuesday, receiving a mix of aspects that may have his team needing to regroup and reconsider their messaging. On the one hand, Neptune is at play for Sanders, turning him into the screen in which everyone casts their hopes and fears onto whether those projections are true or not. In the days following Super Tuesday, Sanders may find himself banging his head against the wall as he has to deal with people and situations that are actively blocking his path forward. Already there are accusations flying around about excessive anger coming from within the Sanders campaign and base that’s creating a lot of bristling.

It's unsurprising as Sanders the candidate is very martial with his Moon and natal Mars conjoined in the sign of warrior Aries. His base is connected with his anger and is inspired by it!

That said, Sanders will have to get a handle on his justified rage and direct it into constructive activities. Otherwise his campaign will be undermined by rash decisions, irritability, and impulsive actions that creates enemies out of would be allies. If the results of the night are indeed disputable, Sanders won’t be served by angry outbursts or impatience. If he can lead with confidence that all will be sorted out in due time, he’ll come out ahead.

Warren's chart is starting to ride a wave of positive energy that began just shortly before the Nevada debates and continues to build steam past Super Tuesday. The day of, Warren’s chart receives supportive energy from the Sun and Neptune in Pisces to her watery Cancer planets, coupled with Venus in Aries inspiring her to fight, especially on behalf of wronged women can be to her favor. Ideally, Warren and her camp will be able to speak to the heart of the people’s hopes and fears with empathy, while also showing off that her sharp Mercury-Mars conjunction in Gemini is more than equipped to think of new ideas and ways of implementing them. If I was Warren’s personal astrologer, I would advise her to commit to as many interviews and community events as possible in the days leading up to Super Tuesday. The Moon in Gemini that day will keep her Mercury-Mars busy communicating her vision and meeting with her base. By the time the Moon moves into Cancer late that night, it will meet up with her Sun and the North Node of Fate and could mean that she does much better than expected. In the days following, we’ll have to watch for either a rapid decline or growth for her and her campaign. At this point, I’m leaning toward growth.

Ah, good ole Uncle Joe, still in the race. If it feels like Biden and his campaign are seemingly coasting along without much friction, you’d be right judging by his natal chart, which is currently receiving quite a few supportive “easy” aspects that keep him chugging along. Mars is gently touching his own Mars, giving him easy self confidence and the ability to express himself without coming on too strong, while Saturn touches his Sun and Venus, helping him to achieve his goals and make progress. However, things feel a little bit sleepy and at times disoriented when it comes to Biden, and once again Neptune is heavily featured. In Biden’s case, Neptune is directly opposite his Midheaven, the point in a natal chart that has much to do with our role in the public domain and our career. Biden will have to evaluate whether this desire for presidency is just a pipe dream or whether it could be a dream that comes true. Biden’s fantasies and imagination will be what takes him up or down the wheel of destiny right now. He may find that matters related to his family will start to take center stage in a way that makes him reconsider his run altogether. The results of Super Tuesday may be the beginning of Biden’s contemplation on whether all dreams should come to pass.

Leave it to an Aquarian to upset the apple cart by jumping into an election this late in the game. Although Bloomberg may be entering the race with plenty of confidence and nearly unlimited funding, Super Tuesday may be an eye opening experience for him and his campaign. After taking a battering in the debates, the Bloomberg campaign won’t benefit from resting on its laurels or attempting to people please just to win people over.

The day of Super Tuesday the Sun will be sitting right on top of his natal South Node of Fate putting a damper on his pride and confidence for a few days, possibly reflected in the evening results. In the long term, Bloomberg would be best served by resolving the grievances leftover from his previous business relationships and partnerships. There could be conflicts that arise thanks to how he used his power and authority in the past. Despite this, Bloomberg will likely bounce back from poor results if he shows continued patience. Bloomberg’s Solar Return chart looks strikingly similar to when he won his first mayoral election in New York City, so don’t count him out just yet.

Amendment: Bloomberg must've felt the downward pull of his transits. He has suspended his campaign on Wednesday, March 4, 2020.

Gabbard has to ask herself if her expression as an individual or a “rebel” is for the greater good or if she’s serving some other nefarious purpose that even she isn’t aware of. Right now she’s undergoing a Uranus transit to her natal Nodes of Fate, she’s being offered a moment to be an agent of change, to disrupt the system, but how that plays out is up to her and her choices. Aside from that, her chart is under a lot of pressure from Saturn, Pluto, Jupiter, and Mars, which can make her feel like she’s under attack by greater forces than herself and can also lead her to believe that she can harness that power for herself. As an astrologer, I would urge her to practice some caution and choose her battles wisely. As an Aries stellium, she may want to rush into trouble head first then have a tough time getting out of it.