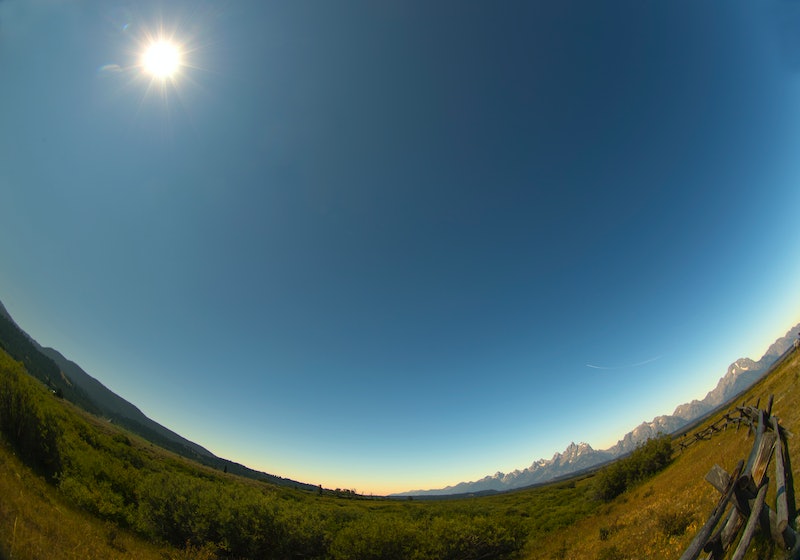 So far, the year 2018 has had more celestial programming packed within it than TGIF did when it was on ABC in the '90s. It's literally been one astronomical event after another, and the year is still so young. We started out strong with two super moons, a blue blood moon, a lunar eclipse, and now we've got a black moon and a partial solar eclipse both happening on Feb. 15. Whew! Try saying that five times fast! With all of these big planetary events happening in the skies above, you're definitely going to want to know what the February 2018 partial solar eclipse means for your sign. If this year has been feeling pretty hectic and scattered for you, you're not alone. Astrologers have been trying to warn us about the effects of the celestial events since the beginning of the year. With all of this energy moving around in space, there are bound to be ramifications down here on Earth.

If you do believe in astrology, you might be concerned about how you're going to be affected by everything going on in the universe. Likely you're finally just getting into a stride with the new year and the last thing you want is an eclipse to... well, eclipse your plans. So, even if you don't believe in astrology, it's helpful to look at the things that astrologists suggest. We can all use a good reminder to focus on the positive, let go of the negative and get some guidance for the things that are less obvious.

The partial solar eclipse might make you look at your social life in a different way. You might start to realize that certain people in your life are not positive assets in the way you thought they were. Be open to the possibility that you might need to rethink the people you keep close, but don't do anything irrationally. Spend a few weeks meditating on it and making sure you want to distance yourself from these people before you do.

You've been working so hard towards something at work that finally feels like it's going to be realized. But the partial solar eclipse might change the direction of things. Just because you've been dead set on a certain goal for a long time, doesn't mean that other opportunities that arise are lesser. Be open to everything positive and consider that you might need to change your idea of your professional future.

You'v been feeling a bit stir crazy this winter and while in some ways you're appreciating the time to sort of chill and relax, a part of you is hungry for adventure. The partial solar eclipse might make it harder for you to resist that appetite for fun so expect to spend the next few weeks cruising for trip ideas online. To satiate that desire, you might want to plan a little weekend trip this month to help you blow off some adventure steam.

This month you might start to question a relationship in your life as new details, thanks to the partial solar eclipse come into view about this person. While it can be deeply upsetting to see someone you love in a new light, remember that your own happiest is the priority, and if this person is keeping you from attaining it, they're not the right person for you. Try to talk to them about your concerns before making and big changes.

You've been working on yourself over the last few months and you haven't been on the hunt for new people in your life. The partial solar eclipse might bring someone into your world that's worth paying attention to. They could be a great friend or lover, so if someone tries to introduce themselves to you this month, make sure you give them the time of day they deserve.

You are such a hard working and have been busting your butt this year. But if you take a break for a minute, you'll realize that you're kind of running on fumes right now. The partial solar eclipse will make you see that, even if you're not willing to. It's more important to produce quality work than just work for the sake of work. So chill out. Recharge a bit. You deserve it and you need it.

Your heart is strong this month. You get to decide where to put it, whether it's into a relationship, a creative project or a fun hobby. Around the time of the partial solar eclipse, you might realize that your feelings are stronger for said endeavor than you realized. Spend some time thinking about that and how better to incorporate it into your every day life.

While you might have been having a fun winter so far, you haven't really been taking care of things that need your attention or that rely on your help. The partial solar eclipse is going to bring some of these things to a head and you're going to have to take care of them. Around Feb. 15, expect to take care of some responsibilities you've been slacking on.

You've been feeling pretty good about yourself lately, but the partial solar eclipse is going to make you question all of that confidence you've built. Be stronger than it and prepare yourself to fight back. You deserve to feel good about who you are.

Your work vibe has been pretty impressive, but the partial solar eclipse is going to leave you feeling a bit distracted and lazy. If you're aware of it though, you won't let yourself slip. And honestly, you can't afford to, you're almost where you need to be, so keep it going. You have it in you.

Get ready for some big changes! This month is going to bring you lots of new opportunities, so embrace it. These changes might come in the middle of the month, during the partial eclipse, which means that the universe is literally bringing you these changes and you should embrace them!

This is your month to focus on yourself and really think about what makes you happy and what you want your future to look like. Look to the partial eclipse for an inspiration or any signs that might help you see it more clearly.