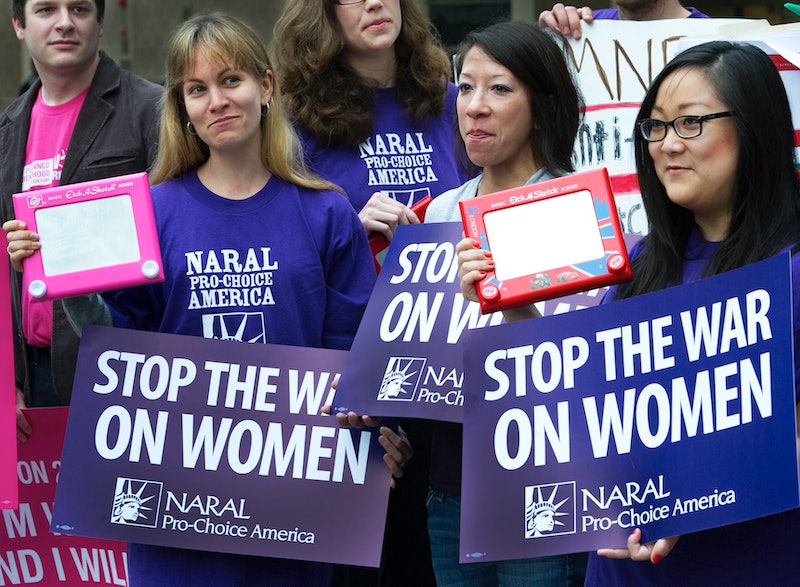 On Jan. 17, Rep. Jody B. Hice, along with 23 other Republican lawmakers, introduced bill HR 586, otherwise known as the "Sanctity of Life Act," to Congress. The proposed measure would grant human rights to zygotes (fertilized eggs), embryos, and fetuses. Not only would this result in the criminalization of abortion and the eradication of in vitro fertility services, but the "personhood" bill could also prompt investigations of women's miscarriages as well.

If it sounds far-fetched, keep in mind that these sorts of incidents have already occurred in the United States. As recently as 2015, a woman in Tennessee was initially charged with attempted murder after trying to induce an abortion with a coat hanger 24 weeks into her pregnancy. The charge was ultimately reduced to aggravated assault with a weapon, and she was additionally charged with attempted procurement of a miscarriage and attempted criminal abortion.

In 2015, Purvi Patel, a woman living in the Mike-Pence-governed state of Indiana, was charged with "feticide" and sentenced to 20 years in prison. In 2011, Bei Bei Shuai, another woman in Indiana, was charged with murder and faced a possible 45-year prison sentence after an attempted suicide resulted in the death of her fetus. While both of these women's sentences and charges were later decreased, they show the frightening reality of what women nationwide could be put through if HB 586 were to be passed.

Similar cases happen in countries with strict anti-abortion laws. In El Salvador, 129 women were prosecuted for inducing miscarriages, despite many of them insisting not having done so.

(1) the Congress declares that—

(A) the right to life guaranteed by the Constitution is vested in each human being, and is the paramount and most fundamental right of a person; and

(B) the life of each human being begins with fertilization, cloning, or its functional equivalent, irrespective of sex, health, function or disability, defect, stage of biological development, or condition of dependency, at which time every human being shall have all the legal and constitutional attributes and privileges of personhood; and

(2) the Congress affirms that the Congress, each State, the District of Columbia, and all United States territories have the authority to protect the lives of all human beings residing in its respective jurisdictions. — Bill HB 586

While pro-personhood advocates insist that women who miscarry would rarely face charges if a bill like HB 586 were to become law, it's difficult to put much stock in these assertions when the president's second-in-command is known as one of the most ardent anti-abortion activists in Congress. If a suicidal woman could be charged with murder under his power, it's unlikely that much reason will be found in the current presidential administration with regard to this topic.

The only silver lining in this case is how unpopular HB 586 is even among conservatives.