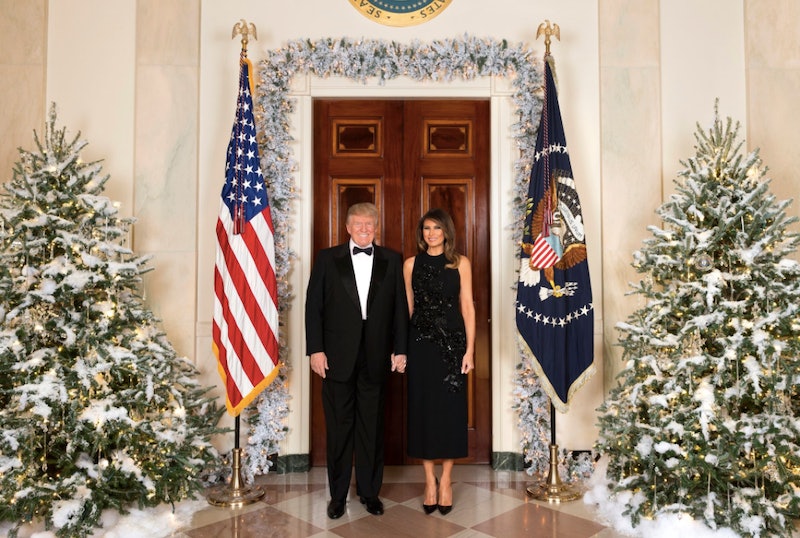 This week, Donald and Melania Trump released their first official Christmas portrait as first couple, capping a tumultuous 11 months in the White House with a photo of them in the Cross Hall, framed by Christmas decorations as they beam at the camera. As traditional as this portrait may seem at first glance, according to Yana German, a body language expert who analyzed the Trumps' Christmas photo for Bustle, their postures reveal a whole different story.

German, who has more than 10 years of experience in analyzing body language and images, tells Bustle that the devil is in the details with this Christmas portrait. Standing between the flag bearing the presidential seal and the American flag, the first couple commands attention in their matching black attire at the center of the photo. The Christmas trees in both corners and the snowy garland around the tall doors add to the portrait's festive, if formal mood.

But a closer look at Donald and Melania's poses and demeanor reveal what a cursory glance cannot. There are several clues in the Trumps' body language that are particularly telling: how they hold hands, the stiffness in the jaw despite the smile, the direction their free hands are facing, and the mood of the photo as a whole.

German says that the first lady is doing something in this photo that she previously had not noticed about her. "Melania's left hand is clenched into a fist which shows anxiety and self-control. If you look at the recent photos of her she's often seen clenching her hand into a fist, something I have never seen Melania doing previously. She may be holding off any negative emotions," German says.

And while the first couple is smiling, German notes that Melania's expression is not entirely convincing. "When we smile genuinely our jaw is relaxed which indicates content and attraction towards the person the smile is directed to," German says. "Melania's jaw is much more tense than President Trump's which once again indicates stress."

Another thing German highlights is Trump's confidence in the photo, and how that contrasts with Melania's posture. The president's right hand, she notes, is relaxed and his posture open, "which indicates self-confidence." German adds:

I think this picture is a perfect example of the President's usual posture. He likes to take up a lot of space and show his dominance.

While Melania has been lauded for her classic style, German points out a cautiousness in the Christmas portrait that others have noted about the first lady's public image before.

"While the picture looks very elegant," German says, "it lacks emotion or warmth. It gives us no insight into their life as a family or couple. It is a very guarded photo that protects their feelings from other people. You can almost compare it to the family portraits painted in the Renaissance era where it was considered inappropriate to show any emotion."

Another detail that German points out is the way the first couple is holding hands in the photo. The direction their palms are facing, German says, is key to telling the dynamic of their relationship, whether affectionate or controlling.

"Pay attention to how President Trump is holding Melania's hand," German notes. "His palm is facing down which indicates control over her and an authoritative presence. He also crosses his arm over hers which once again demonstrates that President Trump sees himself as a leader and superior to her."

The Trumps' first official Christmas portrait has been widely circulated, with many of his supporters praising the couple. And while it's highly unlikely that the intensely private first lady will talk about their marriage in public, body language experts like German could provide valuable insight into the particulars of their relationship.

More like this
10 Common Dating Dealbreakers, Revealed
By Lexi Inks
Liz Feldman Explains The 'Dead To Me' Series Finale & Fan Theories
By Brad Witter
Kendall Jenner & Devin Booker’s Relationship Timeline From Start To Finish
By Jordyn Tilchen and Jake Viswanath
Matt Hancock Broke a Major Rule With I’m A Celeb
By El Hunt
Get Even More From Bustle — Sign Up For The Newsletter