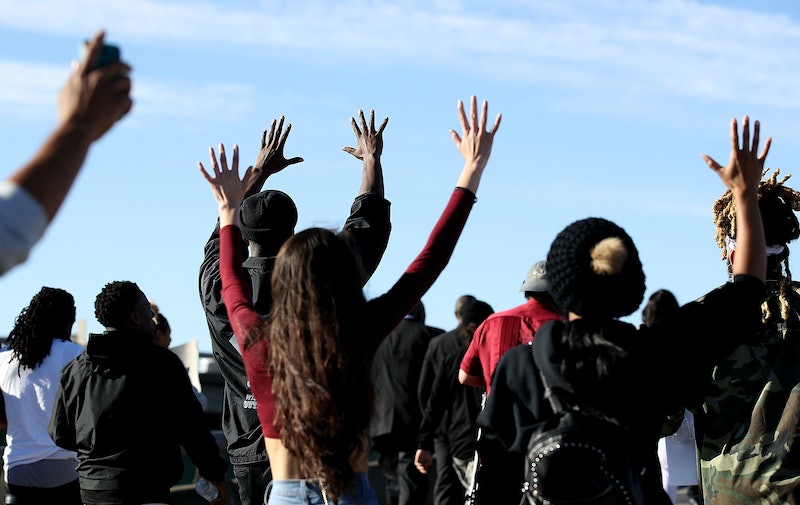 When you talk about the people who are being policed, or the people who see guns [often] and are criminalized, we need to think about the black students first. This [Never Again] movement is very important right now, especially because we haven’t heard from the youth in media for so long. But I think that it’s also really, really important that we discuss how gun control will affect black and brown kids, and particularly in schools.

You know, black and brown kids have been over-policed for so, so long. We’ve been raising up that we need gun control for so, so long. But we’ve been saying that we need it for police. Anyone who has a gun should have gun control. It doesn’t only apply to regular, everyday citizens. It applies to law enforcement, it applies to security... When you’re being overly policed all the time, every second of the day, it becomes normalized.

And then when the Parkland shooting happened, everyone was like, wow. You know, it is a predominantly white school. And I don’t want to say what they went through wasn’t traumatic, it wasn’t traumatizing. I do want to say that as we get justice for the Parkland kids, we also need to be getting justice for the kids — which are particularly black and brown students — who are over-criminalized, over-policed, and see guns every single day. They face that threat every single day.

It’s very problematic for everyone to not realize that gun control actually means gun control for everyone. So when we talk about gun control, who are the most people with guns? The people with the most guns are police. And you see police every day, they’re supposed to be the one protecting and serving us, yet they have these guns and no one’s telling them how to use them; they’re actually hurting us.

I'm 14. I co-founded a branch of the Black Lives Matter movement called the Youth Vanguard [and] we reach out to black youths. We bring them in [and] we talk to them, because a lot of the time black youths feel like they don’t really have a say in what’s going on. I know when everything was going on with the Trayvon Martin case, when everyone was out in the streets, I kind of felt like I didn’t really have a place because I’m a child. My mom wouldn't let me out there in the streets because it wasn’t safe. So we were trying to figure out ways for us to do work and organize with other youths in our own communities, how to get what we want [on] our own terms, policing wise.

It’s kind of been programmed into society’s head that anything white is more like, pure and good. It’s wrong that black students are seen as criminals. And a lot of the times when there have been black people on TV, it’s been taken as, "oh, you deserve this." There’s been victim blaming around black students ... particularly in the media. We’re so criminalized that it becomes normal to see us get hurt [and] be put in danger in these situations every day. So when someone sees us on TV talking about, "we’re fighting for justice," they’re like, "you don’t deserve that justice. What justice are you talking about?"

There’s something to learn in both movements. I think that we should invite the people in the #NeverAgain movement to Black Lives Matter things, and I think we should show up for them.

Right now while we still have this platform, there needs to be a shift in who gets to share their story. I know several black students who have gone through so many traumatic experiences with guns, and I’ve not heard a single story from them or like theirs in the media. And most of those stories involve either police or white people ... pulling a gun on them. I’ve never seen a story like that, and I've never heard a story like that [in the media]. I think while we have the chance, some of those activists in Parkland — or wherever, whoever has the most attention right now — maybe needs to step down a little and let the black students share their voice.

I want to say [to Parkland students] I really support you guys and I’m so proud of you. I really hope that we can work together and we can talk about where our two stories intersect, and how we can be allies for each other to get what we want.

As told to Clarissa-Jan Lim Szu-Hwei.

More like this
Prince William Condemns “Unacceptable” Comments Made To A Black Guest At Buckingham Palace
By Shahed Ezaydi
Here's How To Support Jewish People Amid Rising Antisemitism
By Hannah Orenstein
Ayurvedic Principles & Family Are At The Root Of Fable & Mane
By Justine Knight
Here’s Your Daily Horoscope for December 7, 2022
By Mecca Woods
Get Even More From Bustle — Sign Up For The Newsletter