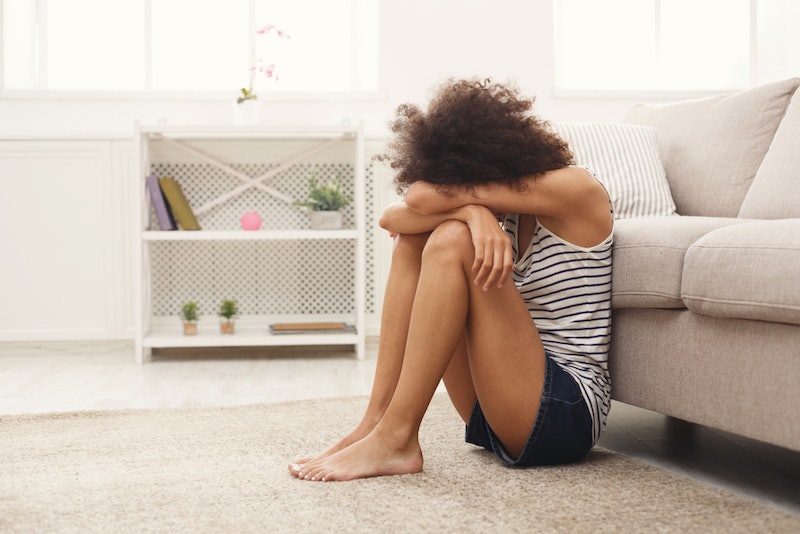 When a story about suicide runs in the news, it can make all sorts of emotions bubble to the surface. But for those who live with a mental illness, hearing about suicide in the news can be triggering for many reasons; it can trigger symptoms of an existing mental health condition. Those triggers can be especially powerful when those news stories are about the calls for help or deaths by suicide of high-profile people you've followed for years on TV and in movies.

Those who live with mental health conditions have faced some heavy stories in their newfeeds this year, including the tragic losses of both celebrity chef Anthony Bourdain and designer Kate Spade to suicide, according to The New Yorker. On Dec. 15, the New York Police Department performed a wellness check after actor Pete Davidson posted a troubling message on Instagram, The Washington Post reports. The post was a screenshot of Davidson’s Notes app, says The Washington Post, containing a message that indicated Davidson was experiencing suicidal thoughts. Fortunately, the police were able to make contact with Davidson, according to The Washington Post, but the post, which has since been deleted, brought up a renewed discussion around suicide in the news that could be triggering to some.

"It's important you activate a plan to help yourself deal with these triggers in a positive, caring way."

A trigger is any sort of stimuli that can cause a person to feel depressed, anxious, or panicked, according to GoodTherapy. Triggers can be smells, sounds, sights, or even feelings, says GoodTherapy, and they can take on countless forms, like a physical location, the anniversary of an event, or even just feeling stressed. So when a person encounters something that triggers them, they might suddenly find themselves becoming depressed or really anxious without warning.

"Even if you weren't in a dark place, sometimes hearing other people's stories can bring you to a dark place,” Celeste Viciere, licensed mental health counselor and host of Celeste The Therapist Podcast, tells Bustle. Viciere says that if you’re feeling triggered, the first step is to ground yourself by reminding yourself that you are OK. According to Viciere, it’s important not to judge yourself for any negative thoughts you might be having and to be proactive about practicing self-care. “This means going for a nice walk, meditating, doing something creative, or talking to a supportive friend,” Viciere tells Bustle. “These are things you may already be doing, but now that you are triggered, it's important you activate a plan to help yourself deal with these triggers in a positive, caring way.”

If you’re unable to remain grounded and calm, the National Alliance on Mental Illness (NAMI) says you should evaluate how urgent your situation is. If you are experiencing a mental health crisis, you can call the National Suicide Prevention Lifeline at 1-800-273-8255 or chat with a counselor by texting HOME to the Crisis Text Line at 741741. If you are in immediate danger, NAMI recommends calling 911 or going directly to a hospital emergency room. NAMI says if you’re still not sure how severe your situation is, ask a friend or family member to stay with you until you’re sure you’re OK. If you’re working with a therapist or other mental health professional, NAMI recommends getting in touch with them to let them know you need some support right now.

Just remember that you don't have to hold yourself responsible for other people's triggers, so don't let a fear of triggering others keep you from reaching out for help. However, if notice a trigger response in a friend or family member, try to offer them the same support and compassion you would want for yourself.

“For anyone who is struggling after seeing the post, I think it’s important to be honest about what you’re feeling and to find a space to process what you’re feeling with your therapist or a trusted friend,” Dr. Joy Harden Bradford, psychologist and host of the Therapy for Black Girls Podcast, tells Bustle. Dr. Bradford says it's also important to understand why you were triggered by discussions of suicide in the news to help you avoid being triggered in the future. Was it because you identified with how Davidson was feeling? Was it because you saw how others responded to his post?

Whatever the reason you felt triggered, know your feelings are completely valid, and that there are resources available to help you get through this.