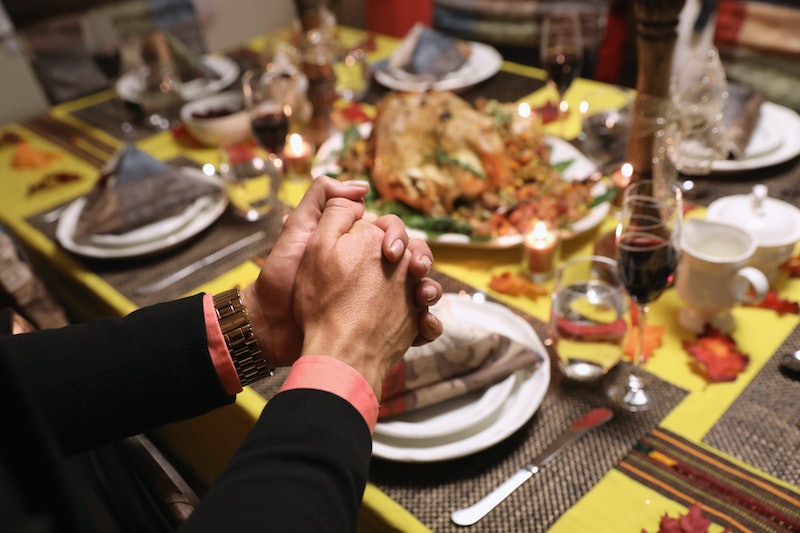 Families can be beyond complicated. You have a wide array of personalities, memories, and dynamics, all intersecting in ways that can get *really* tricky. Throw all that together under the banner of (sometimes forced and obligatory) holiday cheer, and underlying tensions can get intense really quickly. While you might be close with some family members, you might have nothing in common with others. And sometimes families, or a family member or two, are straight up toxic. No matter how you frame it, the holidays can shake up family issues like nothing else. Knowing what to do if your relatives try to start a fight while you’re home for the holidays can be integral to maintaining your peace of mind during the season.

"You will never be able to control someone else’s behavior, [and] that includes family too," licensed marriage and family therapist and author of The Art of Healthy Relationships Kiaundra Jackson, LMFT, tells Bustle via email. Since you can't control how other people might decide to behave, "The best thing to do when a relative tries to start a fight with you is to make sure you are being the bigger person at all times. Whether it’s a physical fight or a verbal argument, it’s imperative that you do not engage in the negativity. Chances are, this relative is known for this type of behavior, and it’s not a surprise to you or to other family members."

"Set expectations early with family members that always tend to start drama," says Jackson. "Let that person(s) know that there will be no arguing or fights this holiday season, and any issues that need to be resolved can be done at another time."

Los Angeles psychologist Leonard Felder told The Atlantic that not only do his clinical findings show that a whopping two-thirds of us have issues with at least one family member, large family gatherings also have a way of dredging up "festering emotional wounds." In other words, families tend to fight at the holidays, and while this can be stressful, it’s also really, really common. If you’ve got that one family member who just can’t ever seem to let things go, set up some boundaries. Deciding what you will and won’t talk about beforehand can help.

On the other hand, "Sometimes it's reasonable to engage," clinical psychologist Deborah Offner, PhD, tells Bustle via email. "If this is a longstanding issue with some prospect of being resolved, and you and your relative don't see each other very much and this issue is getting in the way of your relationship," then it might be helpful to have a talk, she says. "If the fight is about something important that's also been on your mind, it's okay to have an argument. Sometimes holiday periods are the longest stretches of time family members have together, and with daily routines put aside, [the holidays] might present a rare opportunity for you to hash something out."

If engaging in a productive discussion with your relative isn’t really possible, however, "you have three choices," says Offner. "You can engage, deflect, or postpone. If there is a way to deflect a fight during this compressed, intense ‘family time’, take it." Changing the subject, or giving in or apologizing if it feels OK to do so, can help diffuse tension, Offner says. Saying something like "You know what? You've always wanted me to watch football with you, I think I'm ready to do it this year." or "You know, I see what you're saying, and I'm going to defer to your judgement on this one," can be helpful if you need to disengage from a conflict.

"Finally, if the issue is too important, or your relative is too determined for deflection to work, propose rescheduling the argument for some later time," Offner adds. Telling them that, "We should sort this out, but can we wait until everyone else has gone home/to sleep, or can we do it over FaceTime on Sunday?" can help.

If you anticipate family conflict at the holidays this year, it’s important to assess the situation carefully, and decide how you want to handle things. When dealing with an important issue with a family member you’re normally close to (especially if there’s an opportunity to resolve a problem) weigh the possibility that engaging in some confrontation might be helpful. If you’re dealing with a toxic, unreasonable, or potentially abusive family member, however, setting boundaries around what you will and won’t tolerate, or discuss, is probably your best bet. Conflict isn't always a bad thing, and engaging can give you a chance to resolve a pressing issue. Deciding whether or not you want to clear the air during the holidays, however, or press pause on the conversation instead, is your choice.