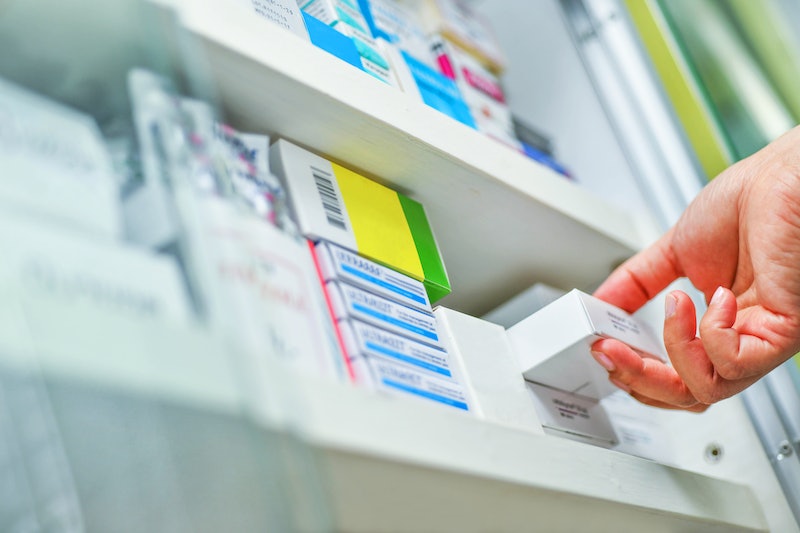 Over the weekend, national pharmacy chain CVS had to issue an apology after an employee in Indiana refused to sell cold medicine to a Purdue student with a Puerto Rican ID card. According to The New York Times, the pharmacy rejected José A. Guzmán Payano’s ID, claiming he needed to provide a valid visa as well — even though people born in Puerto Rico are U.S. citizens. While some medications do have federally enforced age restrictions to combat misuse, a legal expert tells Bustle that there are no laws in place that limit selling medication based on immigration status. Still, pharmacy refusals are not unheard of in the U.S., and people seeking birth control and emergency contraception are particularly at risk of being denied the care they need.

Mara Gandal-Powers is a senior lawyer at the National Women’s Law Center (NWLC) and the director of birth control access. The NWLC has received reports of pharmacies refusing to fill prescriptions or provide emergency contraception in at least 26 states. Gandal-Powers says that this is, in part, because of pharmacists placing their own values over their responsibility to patients.

“We've heard reports from more than half the states over the years of folks being denied birth control," she says. "It's very concerning that this happens, particularly in the case of emergency contraception where the effectiveness of the medication depends on how soon you take it.”

Because states oversee pharmacy regulations, the autonomy that pharmacists have to refuse to dispense varies by location. Gandal-Powers says that when a patient is faced with a pharmacist refusing to dispense their medication, there are options available to ensure the patient receives care. “One thing you can do is file a complaint with their state board of pharmacy saying they didn't get the care that they needed from the pharmacist,” Gandal-Powers says. If a patient is denied care, the quickest solution is to find another pharmacy. Gandal-Powers says patients should call ahead so they know another pharmacy will have their medication in stock and be willing to dispense it.

Reporting the incident to the state’s board will help the state figure out if the issue is widespread, or if an investigation is necessary. If the patient was denied care at a large chain, filing a corporate complaint or going public with the incident can make a big difference. “If it’s like a large chain pharmacy, report what happened to the corporate offices,” Gandal-Powers says, “A lot of the large corporate pharmacies have policies that protect patients so that they can get a referral and then get the care that they need.”

Guzmán Payano posted his experience on Facebook, where it got over 11,000 shares and the attention of both local and national news outlets. According to The New York Times, it wasn’t until after Guzmán Payano’s story got widespread media attention that CVS issued its apology.

The next step, Gandal-Powers says, is to bring the issue to the attention of state lawmakers, since they have the power to actually change relevant policies. “If someone is living in a state that doesn't have protection,” Gandal-Powers says, “advocate with the pharmacy board to make sure that the protections are in place, or [contact] the state legislature because they can really influence that.”

One thing to keep in mind, Gandal-Powers says, is that drugstore employees that aren’t pharmacists aren’t governed by the state board. Only seven states (Alabama, Delaware, New York, North Carolina, Oregon, Pennsylvania, and Texas) have policies in place that explicitly allow pharmacist refusals. However, non-pharmacist drugstore employees don’t fall under those laws. So, if a store employee refuses to sell an over-the-counter product to a consumer who’s not violating any store policies, Gandal-Powers says the customer should speak up, explaining, “You have a right to buy a product that's on the shelf, and you should assert your right to do so.”

While being assertive in stressful situations, especially those involving medication, may be easier said than done, Gandal-Powers stresses that the NWLC has resources available to patients and consumers facing pharmacy refusals, including a hotline and email they can call for guidance.

“When you are dealing with this and you're not being able to get the medication that you need, it is incredibly frustrating, you feel very vulnerable,” Gandal-Powers says, “but I think if you can keep in the back of your mind, ‘I am right, I know people will support me in this,’ that can help get you to the other side of it.”