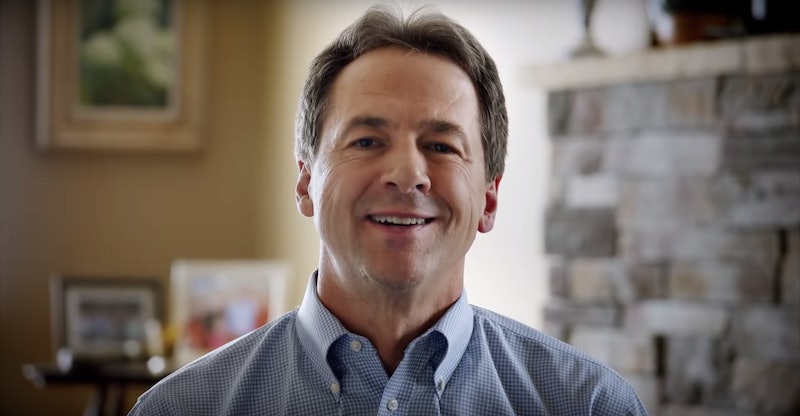 And then there were 22. With Montana Gov. Steve Bullock announcing his presidential campaign, as CNN reports, the total number of Democratic contenders for the nomination reached a new threshold. And while the newest entrant is well known in his home state — the country's fourth largest by area — he doesn't yet have much name recognition nationally (he's not even polling at 1%, according to Real Clear Politics' average). So here's what you need to know about the newest candidate.

Bullock announced his run via a video uploaded to his YouTube channel. In it, he suggested he would take on money in politics and special interests while reaching out to Republicans as he has done in Montana. Bullock won reelection in 2016 — even though President Trump was on the ballot and easily beat Hillary Clinton.

He also introduced himself to voters, sharing in the video that he was raised by a single mom and only knew there was a governor of Montana because he delivered the paper to the governor's mansion.

1. He's Originally From Missoula And Helena

Bullock was born in Missoula and raised in Helena, according to his National Governors Association biography. The Montana factor definitely plays a big role in his introduction video, as he presents himself as a Midwestern candidate who could successfully take on Trump. He went to college out of state, though, first in California at Claremont McKenna for undergrad and then Columbia Law School in New York City, according to the Montana governor's website.

If you've been to law school and you loved it — or you hated it — Bullock may remind you of the professors you had. He taught as an adjunct professor at the George Washington University Law School, according to the National Governors Association biography of him.

3. Bullock Is Pro-Choice And Has Proven It

The Republican-controlled Montana legislature approved several bills that are supported by anti-abortion activists in 2019 — and Bullock vetoed them all, according to the Associated Press. One, according to the AP, would have required women to see an ultrasound and listen to a fetal "heartbeat" monitor before having an abortion. Another, according to Rewire News, could have sent doctors and nurses to prison for up to 20 years for performing some late-term abortions.

Bullock has pushed for gun control based on the "shared value of protecting our families and focus on what we have in common rather than what divides us," as he describes it. He's against arming teachers, is for an assault weapons ban, and also supports universal background checks, according to CNN.

Bullock officially endorsed many of these positions in an op-ed printed in USA Today in May 2018. In it, he addressed the fact that his 11-year-old nephew was shot and killed on the playground at his school by another student.

Serving as Montana's attorney general, Bullock ensured that the state's limits on corporate spending in elections continued — even after the Citizens United decision, The Guardian reported.

6. He's Not Running For Senate

In a move criticized by some activists, Bullock has ruled out running for Montana's U.S. Senate seat, saying that he doesn't have any interest in the role. "I think that my skill set and what I’ve done, I just wouldn’t enjoy it, so I’d ruled it out," Bullock told the Montana Lowdown podcast, as reported by The Los Angeles Times.

7. He Has Signed Bills Supporting The Poor And Expanded Medicaid

Bullock is one of the few governors who has successfully expanded Medicaid in a state with a Republican-controlled legislature, The Billings Gazette reported. He also signed a bill to extend the program for six more years just last week, the AP reported. That key Obamacare component has been a lightning rod in most other red states in the country. He also recently signed a bill lauded by the ACLU for combating the criminalization of poverty.

The Great Falls Tribune reports that he married a staff member in 2015 — the first Montana governor to ever do so. Bullock supports marriage equality. At the time, he performed the ceremony, marriage equality had been legal in Montana for less than a year.

9. He Even Runs Marathons

Bullock reportedly enjoys running marathons. In 2015, he even ran in the Boston Marathon, according to The Billings Gazette. He finished in about 3 hours and 40 minutes, the paper reported.

The governor's path to the White House may still be difficult. According to FiveThirtyEight, he'll need to do well in the Mountain West to have a chance at taking home the nomination.