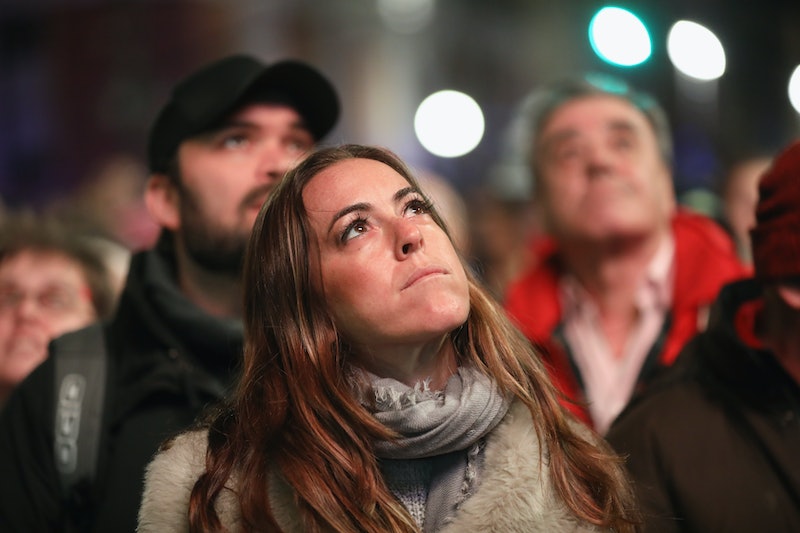 If you're an opponent of Donald Trump, you've probably heard one of his supporters insist that "He's your president now, so you have to accept him," or some variant thereof. The implication is that because Trump cleared 270 votes in the Electoral College, Americans must refrain from criticizing him and root for his unabated success instead. But that is nonsense — accepting that Trump is our president now does not mean what a lot of his supporters seem to think it means.

I vehemently oppose Trump and his agenda, but I accept that he's my president now. To be more specific, I accept the fact that he has completed the legal process necessary to serve as president of the United States. It is factually correct to say that, as of Jan. 20, he is America's 45th president.

But that's all I accept. The rest I reject.

I reject the implication that just because Trump is president, we aren't allowed to condemn him anymore. On the contrary, we most definitely are allowed to condemn him, whenever we like and as strongly as we see fit. One of the nice things about living in a democracy is that we're allowed to freely criticize our government. This is the constitutional right of every American, and I'll exercise it under any president with whom I disagree. I suspect I'll be exercising it frequently under the Trump regime.

Here's what you can say to people who tell you that you have to accept Donald Trump:

I accept that Trump is the president. But I condemn his unabashed bigotry and his hateful comments about women, Muslims, Hispanics, and other marginalized groups. I condemn him for mocking Serge Kovaleski and welcoming white supremacists into his administration. I condemn him for running a campaign based on division, and for lying to the American people. I condemn his inability to admit personal fault. I condemn his lack of intellectual curiosity and his disrespect for American norms and values. On the most fundamental level, I condemn Trump as a human being.

Furthermore, accepting that Trump is president doesn't mean you have to root for his success. Sure, I'd love for Trump to make the country a better place. The thing is, Trump's concept of "better" is diametrically opposed to mine. I don't want him to succeed in implementing a ban on Muslims entering the country. I don't want him to succeed in building a wall on the Mexican border or in repealing Obamacare. I want him to fail at these goals, because I think the country will be a worse place if he succeeds in them.

Still, I accept that Trump is the president. And I despise him, reject everything he stands for, wish he hadn't won, and sincerely hope that he fails in implementing his policy proposals.

But I don't deny that he occupies the White House. And that might be the only common ground I find with Trump supporters over the next four years.