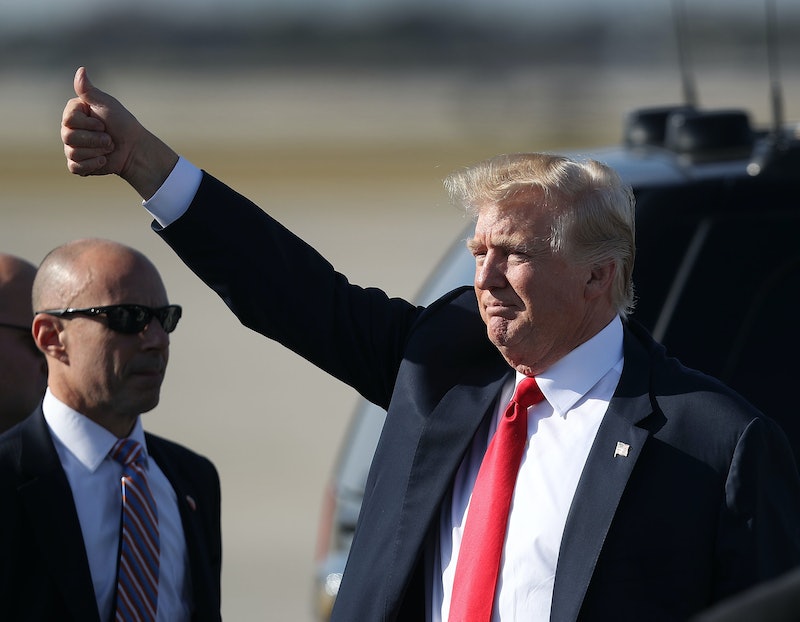 Speaking Sunday from Saudi Arabia, President Donald Trump told the leaders of more than 50 Muslim countries that he was not at war with Islam, but rather fighting "barbaric criminals" in "a battle between good and evil." But while Trump may have been hoping to reset his relationship with Muslims around the world, the glaring contradictions between the message of religious tolerance he shared Sunday and the Islamophobic rhetoric he employed on the campaign trail during the 2016 presidential election were hard to miss. Although the president spoke of religious tolerance in Riyadh, many of Trump's previous comments on Islam and Muslims have communicated a markedly different message of fear and prejudice.

In a speech delivered Sunday at an Arab-Islamic-American summit in Saudi Arabia, Trump told leaders from more than 50 Muslim countries that he wasn't looking to wage war with Muslims. "This is not a battle between different faiths, different sects, or different civilizations," Trump said before going on to characterize the battle as one involving "barbaric criminals" and "decent people" of all faiths. "This is a battle between good and evil," he said.

However, Trump appeared more than willing to claim the United States was at war with Muslims during a town hall moderated by CNN's Anderson Cooper in Milwaukee, Wisconsin on March 29, 2016. "We have a problem, and we can try and be very politically correct and pretend we don't have a problem, but, Anderson, we have a major, major problem," Trump said when asked if he trusted Muslims in America? "This is, in a sense, this is a war... Nobody wants to call it a war. It's a war. There's a war."

While Trump characterized the war against terrorism as a battle between "barbaric criminals" and "decent people of all religions" in his speech Sunday, many of his previous comments seem to suggest he may not consider Islam to be a religion involving "decent people." Shortly after making "a total and complete shutdown of Muslims entering the United States" an official part of his presidential campaign platform in December 2015, Trump appeared to define Muslims as "sick people" in an interview on Fox News. "There's a sickness," Trump said when asked if his ban on Muslims would apply even to Canadians who practice Islam. "They're sick people. There's a sickness going on. There's a group of people that is very sick."

In an interview with CNN a few months later, Trump said he believed "Islam hates us" in a statement that appeared to suggest he considers there to be little difference between Islam and Islamic extremists. "There's a tremendous hatred. There is an unbelievable hatred of us," Trump said. When pressed to clarify if he thought the hatred was in Islam itself or merely a part of radical Islamic terrorism, Trump remained mum. "You're gonna have to figure that out, OK?" he said.

In a March 22, 2016 interview with Fox Business, Trump said he believed the United States was "having problems with the Muslims." Trump went on to call for surveillance of mosques, claiming there was "a sick problem going on." And that wasn't the first time Trump had made statements in which he characterized mosques as dangerous places of recruitment rather than houses of worship. "If you have people coming out of mosques with hatred and death in their eyes and on their minds, we're going to have to do something," Trump told CBS News in December of 2015.

Although the Trump who spoke of shared interests and values in Riyadh on Sunday, sounded noticeably different than the man who'd proposed banning an entire religious faith from entering the United States and characterized Muslims as "sick people" and Islam as a religion that "hates" the West, his most recent speech should in no way serve to wipe the slate of his previous anti-Muslims statements clean. With a litany of statements behind him that contradict nearly everything he said Sunday, there's little reason to think Trump seemingly Islamophobic perception of Muslims has honestly changed.