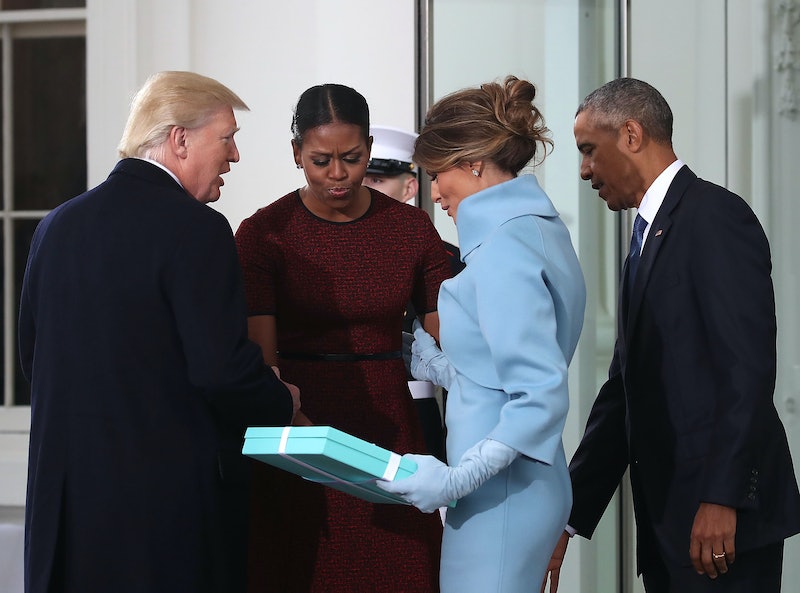 Due to their differences in temperament, policy, and a great many other areas, many have been surprised by the relative congeniality between President Obama and President-elect Trump. According to Kellyanne Conway, Trump's former campaign manager and soon-to-be counselor to the president, the two men talk on a regular basis. Perhaps some of that mutual cordiality explains the impulse behind Melania Trump's decision to bring First Lady Michelle Obama a gift at their official White House meeting ahead of Trump's inauguration. What did Melania Trump give Michelle Obama? Wrapped in a box unmistakably from Tiffany's, the gift inside remains a mystery — unlike the obvious awkwardness of no one knowing where to put the dang thing.

Twitter got pretty excited with speculation on what might lie inside that box. Plenty of commentary also focused on the various moments of awkward bungling that went on while trying to find a place to put the gift before taking photos. Eventually, President Obama himself took the box back into the White House, and emerged for the customary photo shoot.

The high-stakes moment, interrupted by an unexpected hiccup, was a nice reminder that these larger-than-life figures are human. And as such, maybe the logistics of things aren't always thought out fully ahead of time...

Presenting the outgoing first lady with a gift certainly seems like a nice gesture. But, as with many things in life, timing is of the essence. What might have been an easy greeting turned into a bit of an undue awkwardness.

Tiffany's has a special place in the Trumps' hearts. For starters, Trump's daughter Tiffany was named after the famed jewelry company. I can't actually think of any greater way to demonstrate one's love for a business. Trump clearly feels a strong bond with Tiffany's, and Melania seems to share it. There's also a Tiffany's & Co. located right next to Trump Tower in Manhattan, so extra points for geographic proximity, I guess?

Daniel Victor at the New York Times has even reached out Tiffany's, but they're not talking about what merchandise might come in a box of that size. So as far as the mystery box, intrigued Americans will just have to wait and see if Michelle Obama reveals the contents later.