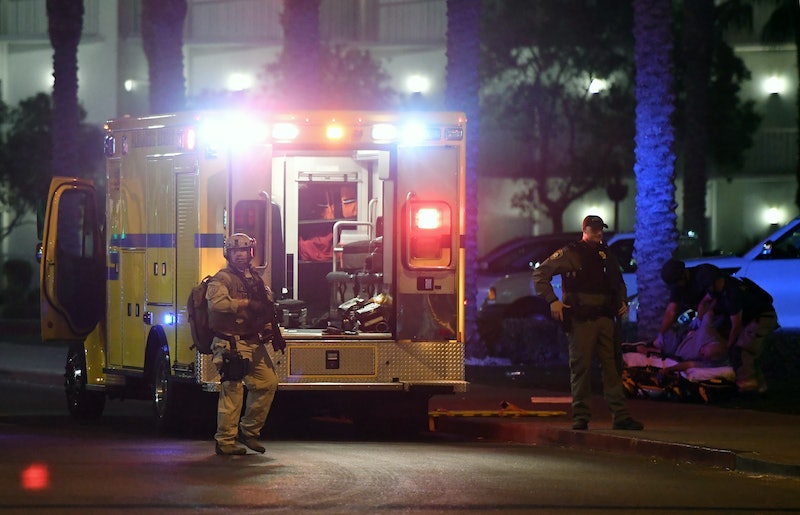 On Monday, Oct. 2, Americans woke up to news of the deadliest mass shooting in modern U.S. history. Over 50 people have been killed and at least 400 people have been injured at Route 91 Harvest Festival in Las Vegas.

One witness described the "nonstop gunfire" that showered on the 22,000 festival attendees from the 32nd floor of the nearby Mandalay Bay hotel. Upon entering the shooter's hotel room, police reportedly found "a cache of weapons, including 10 rifles." And yet, as of 10 a.m. Monday morning, the country is still waiting on the NRA's response to the Las Vegas shooting.

The same group that said "[they] were coming" for The New York Times in a recent controversial ad, the same group that has fought against background checks and restrictions, has nothing to say about the biggest mass shooting we've seen. Though every shooting in the U.S. is an unnecessary tragedy, the scale of this most recent event is harrowing. A man was able to arm himself with enough weapons to kill over 50 people and injure hundreds in a matter of minutes. That's the country we live in — and the NRA is a huge part of that.

Though we have no official statement from the NRA as of 10 a.m. on Monday morning, their spokesperson has been active on Twitter. Dana Loesch's tweets emphasize the gunman's motives, without dealing with the weapons — and his ability to get the weapons.

Though Loesch acknowledged that the event is "horrific" and "evil" — which goes without saying— there is no acknowledgment that guns (and a lack of gun control) were part of the problem. Prayers are not the answer to this — gun reform is.

On Monday afternoon, NRA TV ad spending that was meant to start tomorrow was postponed — until October 10. As Judd Legum, editor and founder of Think Progress, points out, that is only eight days. The NRA seems to think that eight days is enough time to forget the deaths of over 50 people, to forget about the hundreds who have been injured. Mass shootings are just a fact of life in America, so why not continue business as usual? The callous attitude is an insult to the victims and their families.

But this is not the first time that the NRA has been quiet directly after a mass shooting. After the Pulse nightclub tragedy last year where 49 people were killed, there was a two-day silence before Chris W. Cox, executive director of NRA's Institute for Legislative Action, published an op-ed saying that gun control doesn't deter terrorists — ignoring the fact that terrorists need access to weapons to actually commit terrorism.

After the San Bernadino shooting in 2015, Cox said:

Here's another fact: the president's failed foreign policy has made us less safe. And his domestic gun control agenda would jeopardize our safety even further. In California, President Obama had what he wanted — the strictest gun control in the country — and it did not prevent this evil act.

(Fourteen people had just been killed at an office party.)

No matter how much you talk about motivation, domestic terrorism, or lone wolves, the bottom line is that motivations don't kill people — guns kill people. I live in London, where we have suffered an enormous amount of terrorism this year. And though each death is a tragedy, the numbers will never rival the numbers killed in the U.S. — because we don't give people with violent motivations the tools to murder dozens of people within minutes. We won't give them the guns. But in America, there are more guns than there are people.

And so now we'll have to wait to hear from the NRA — if we hear anything at all. We'll hear that gun control won't change things — despite Australia's successful gun control reform after a single massacre, which led to a plummet in the number of mass shootings.

We'll hear that we need to be armed in this war on terror, despite the fact that more people are shot by toddlers than killed by terrorists on American soil.

What America won't hear from them is what America needs: gun control, an apology, empathy, grounding, or hope.