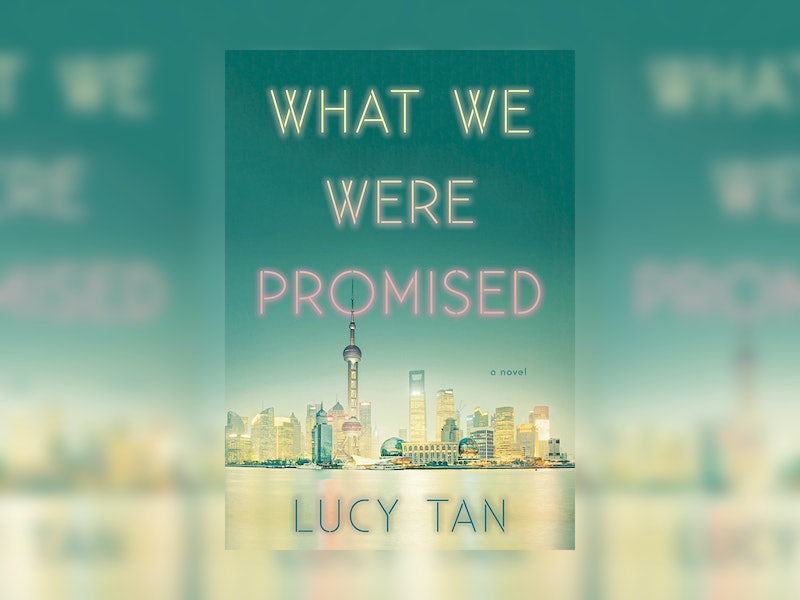 What the bio in the back of Lucy Tan’s novel, What We Were Promised won’t tell you is that the debut author was once “caked in the face alongside Jennifer Lawrence” — a nod to Tan’s early aspirations (actress, as well as writer) and her brief appearance in a 2005 promo for MTV’s My Super Sweet 16. “I didn’t know it then, but the quiet, mature 15-year-old who played the birthday girl, and with whom I shared a cab ride back to Manhattan, would one day win an Oscar,” Tan tells Bustle in an email. “I still can’t believe I got to witness Jennifer Lawrence’s first acting role ever! Sadly, but not surprisingly, my own acting “career” fizzled shortly after.” As a reader of Tan’s work — not only of her novel, but of short pieces like "Cachito", which appeared in Sixfold Journal and "Safety of Numbers", for which she won the 2015 Ploughshares' Emerging Writer's Contest — I can say: readers will be glad it did.

What We Were Promised interweaves the stories of an expat family recently returned to China, a long-lost brother, and a rural-born housekeeper finding her footing in modern Shanghai. The novel speaks to unrequited love and family tensions, as well as what it means to feel out of place, both as an immigrant and in one’s country of origin. The Zhen family — wife Lina, husband Wei, and their daughter Karen — have recently returned to China after over a decade living in the United States. Qiang, Wei’s brother, appears in Shanghai after being thought dead for years. Sunny, the Wei's housekeeper, has moved from her hometown in rural China in search of social and financial independence.

“I wrote this novel from multiple perspectives because I wanted to highlight how much my characters misunderstood about one another,” says Tan. What We Were Promised weaves in and out of the past and present, and is told through the alternating voices of Sunny, Lina, and, though less frequently, Wei and Qiang as well. It also highlights the class struggles of modern-day China: the Zhen family live in an elite community of Chinese-born, Western-educated professionals, while their employee, Sunny, is lives a lifestyle modest enough to send the majority of her income home to her parents.

"I wrote this novel from multiple perspectives because I wanted to highlight how much my characters misunderstood about one another."

“When you’re in a position of privilege, like Lina and Wei are, it’s especially easy to discount the experience of a migrant worker like Sunny," she says. "How often does Lina think about Sunny, her nanny, who spends every day in her home? A handful of times, throughout the entire novel. Sunny, on the other hand, spends most of her time worrying about the family that employs her. She thinks about everything from their food preferences, to the Zhens' marriage, to the health of their daughter. The novel ends without the Zhens ever knowing Sunny’s given name." (All the housekeepers in Tan’s novel adopt English names, with the idea of making their employers more comfortable.)

Like many immigrant and expat stories, Wei, Lina, and Karen each struggle with feeling simultaneously at home and displaced — geographically, socially, and economically. Sunny is also torn between her chosen home of Shanghai and her rural hometown and her desire to be a woman with economic independence within her family culture.

"Sunny isn’t an immigrant, but as a single woman coming into the city from the countryside, she may as well be," Tan says. "I think this is an example of how entire experiences — and communities — can become invisible to the privileged majority. Immigrants are rarely in the position to tell their stories to a wider audience, and so it’s that much more important for the rest of us to go out in search of them. And, when appropriate, to speak up for those who can’t.”

In her own life, Tan has traversed the terrain her characters move across as well. “I was born and raised in the United States, but my parents are from Wuhan, a major city in China,” the author says. “Though I’d visited China plenty of times growing up, I didn’t have my first encounter with rural China until I was 17-years-old."

The then-teenage Tan traveled to China as part of program designed to connect Chinese-Americans with the homeland of their parents, exploring much of the country by bus. "I got to experience the Chinese countryside for the first time," Tan says. "I harvested rice from rice paddies, ate local delicacies, and got good at using squat toilets. Imagine my surprise, then, when I moved to Shanghai after college and found it to be more modern than New York City. It was home to the tallest skyscrapers I’d ever seen, and more seemed to be popping up every few months. The quickly changing landscape of the city fascinated me, and I knew I’d want to write about it one day.”

"Imagine my surprise, then, when I moved to Shanghai after college and found it to be more modern than New York City."

In addition to tensions generated by location, What We Were Promised is also filled with family tension. Each of Tan’s characters, in their own ways, are fueled by familial obligations that are simultaneously restrictive and freeing. When Lina is first married to Wei, she thinks: “Marriage. America… How could two things that represented such different experiences — one a limitation, the other an adventure — be wrapped up in one?” Sunny also finds freedom within her obligations to her family: earning more money for them also means an opportunity to improve her own quality of life. The narrative of familial obligations being a burden is a familiar one for many, but the idea of finding freedom in your obligations to your family is perhaps less so, at least in the Western culture many of Tan’s readers will be most familiar with.

“I think a lot of this comes from difference in values between East and West,” Tan says, comparing the individualistic culture of the United States, to the family-centered culture of China. “In America, we champion the individual. Kids do chores to earn allowances and later take on their own student loans. They’re taught from a young age to value their independence. It’s this mindset that fuels our marketplace and our culture. In China, family is generally valued over the individual. Adults make fundamental sacrifices for their children, and when the children become adults, they return the favor."

"In China, family is generally valued over the individual. Adults make fundamental sacrifices for their children, and when the children become adults, they return the favor."

She describes the guilt that can often result from making decisions independently, compared to the pride of making one's parent's happy — a journey her character Sunny will take, before the novel's end. "I think many people try to find a path in between," Tan says. "When Sunny chooses to leave home, she gets a little of both worlds — she’s able to support her family financially while living in a city where she can be independent. Lina, too, sees her marriage to Wei as a compromise. She gets to experience freedom through travel while still following her parents’ wishes by marrying Wei. There are times, though, when both Sunny and Lina wonder if compromise is enough.”

In a nod to feminist literature, Lina is drawn to Simon de Beauvoir’s The Second Sex — the classic is a formative book during her college years. The line that resonates most with Lina is: "One is not born, but rather becomes, a woman," — suggesting that What We Were Promised, ultimately, is about becoming someone other than (or perhaps more than) who you were born. Tan agrees. “So much of Lina’s, Sunny’s, and even Wei’s upbringings have taught them to improve their stations in life thereby improving the stations of their family. Such goals include marrying well, having children, gaining education and/or getting a good job. Their desires to ascend don’t change as they enter adulthood, but the ways they measure that ascension do. By whose values should they live? How much of their parents’ beliefs do they still subscribe to? These are the questions they attempt to answer throughout the novel.”

"Their desires to ascend don’t change as they enter adulthood, but the ways they measure that ascension do. By whose values should they live?"

Tan's original title for What We Were Promised was actually "The Insolvents" — Tan explaining that she wanted to use the novel to explore ideas of debt: financial debt, national debt, the ways people become indebted to one another. But, as Tan says, “The word 'promise' is more fitting for this story, where so many promises are made and broken. And then there is the greatest promise of all, the one you make to yourself when you’re young: that you’ll live your life in a way that you’re proud of. This book opens at a moment of self-reckoning, when main characters are asking themselves if they’ve done this.”

The ultimate message of What We Were Promised is one all young, millennial readers can relate to. Tan says that the novel asks readers: “To question the things you’re expected to do, to treasure love in all its forms, and to find a way live for yourself in a world that does (and should) ask you to support others.”