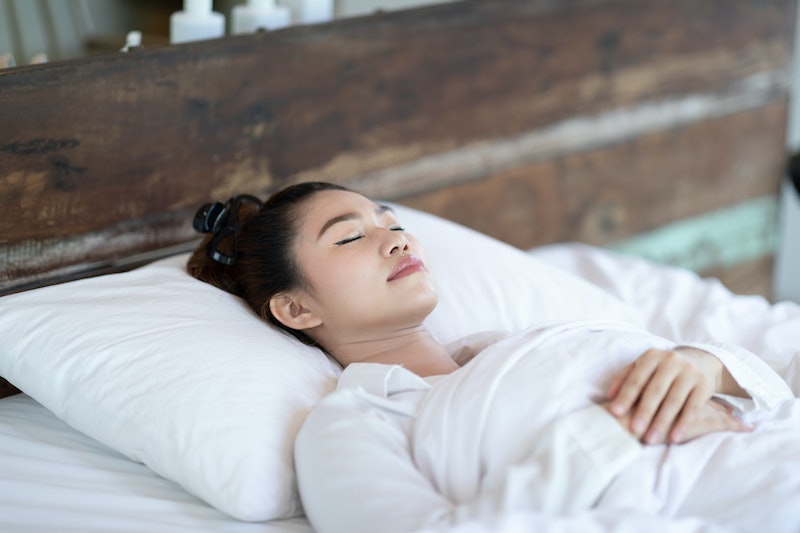 In the popular imagination, white noise usually means television static or the crackling that emerges from white noise machines. It's actually a pretty complicated noise — and researchers have found that white noise has a lot of effects on the brain. White noise is a collection of randomized sounds from every frequency on the acoustic spectrum, all with the same intensity. It's called white noise because it's the auditory equivalent of white light, which contains equal intensities of all kinds of light. Research shows that white noise may help us focus in the short term, but over the long term, it can actually damage our synapses.

"In naturally structured sounds such as speech and music, only a few frequencies occur at a time, with predictable relationships among the combinations and sequences of notes," Dr. Mouna Attarha, Ph.D., a researcher at Posit Science who researched white noise at the University of Iowa, tells Bustle. "Acoustically, white noise is the equivalent of mashing all the keys at once on a thousand untuned pianos — random activation of every frequency at once with absolutely no relationship among the different notes."

The brain's reaction to white noise isn't radically different to its reactions to other sounds. "It appears that white noise is processed very similarly to other noises in the brain," Joanna Scanlon, MSc, a researcher at the Mathewson Attention, Perception, and Performance Lab at the University of Alberta, tells Bustle. However, the brain doesn't treat it in quite the same way as speech or song. "One EEG study found that white noise induced brain activity with lower amplitude to that of pure tones, but also higher amplitude to that of clicking sounds," Scanlon says. The study, she says, implies that the brain thinks that the white noise was less worthy of attention than pure tones, but more relevant than random clicking. This is why white noise machines help lull your brain to sleep — it masks the random noise of the street outside or of your radiator tapping to life, but isn't annoying enough to register in your brain.

Scanlon's own research has shown that the brain tends to filter out white noise when it's attempting to focus on another noise. "My research used white noise as a background stimuli for an auditory task, compared to using other background noises," she tells Bustle. "We observed evidence for a mechanism in which the brain 'tunes in' to the relevant sounds (i.e. the auditory task) while it 'filters out' the white noise." The brains studied in the experiment did the same thing when they were exposed to background noises, but showed a stronger reaction. In other words, white noise got the same neurological reaction as dogs barking or traffic noise, but proved easier for your brain to block out.

Scientists have been attempting to figure out how white noise affects concentration, memory and cognition for a while. A 2014 study in Journal of Cognitive Neuroscience found that playing white noise could slightly improve memory if it was played during a memory task, while research published in Nature in 2017 found that it could help adults learn new words. A review of the science around white noise in 2015 noted that white noise isn't a miraculous brain-changer; it just affects our concentration, depending on the context. "White noise has no general effect on cognitive functions. Instead, [it has] differential effects on perception and cognition depending on a variety of factors such as task demands and timing of white noise presentation," the review said. Depending on how you use it and where you are, white noise can make the brain's auditory centers focus, which may help concentration and memory.

This is also why white noise may be helpful for sleep in some people. Research in 1990 showed that it could help to induce sleep, while other studies, including one in hospital patients in 2015 and another on people with insomnia in 2017, have shown that it can improve sleep quality and help people with sleep issues fall into deep sleep more quickly.

However, being exposed to white noise over the long term might not be a great idea for brain function, because of the brain's tendency to adapt to what it hears. "Studies have shown that exposure to information-rich signals such as speech or music shapes the brain," Dr. Attarha tells Bustle. "Individual cells become more specialized, for instance, by responding selectively to only a narrow range of sound frequencies. On the other hand, long-term exposure to signals that lack information — such as random white noise — influences the brain in a maladaptive direction." The issue, she tells Bustle, is that white noise exposure can tell our cells to respond to almost anything, which can alter our ability to process speech and music.

Research from 2003 found that long-term exposure to white noise damaged the auditory organization of rat brains, making them less capable of healthy development. Dr. Attarha's own research has shown that white noise usage for long periods, used for sleep or for managing tinnitus, can impair the central auditory system in the brain, and potentially contribute to brain aging. The key to this long-term damage, she tells Bustle, is in the excitatory and inhibitory cells in the nervous system. "Just as the gas and brake pedals in a car are used to 'go' and 'stop' in response to different roadway signals, excitatory and inhibitory cells in the nervous system influence other cells to 'go' or 'stop' in response to different sensory signals," she says.

While noises with lots of complexity and information, like music, encourage these cells to specialize, only sending a "go" signal in response to a particular noise, white noise makes them much less sensitive. "White noise exposure gradually decreases levels of inhibition, resulting in cells that are unable to 'stop' responses to a broad range of sound frequencies," Dr. Attarha tells Bustle. That disruption, she says, can cause problems with memory and decision-making down the line. The more white noise you hear, according to this theory, the less capable you'll be of blocking out irrelevant noises or focusing on sounds in a noisy environment.

These concerns about white noise are part of the reason why pink noise has now become more popular. Pink noise is similar to white noise in that it contains sounds across all frequencies, but it has more variation: low frequencies in pink noise are louder and more intense than high frequencies, even if we can't detect it when we hear it. A study in 2012 in Journal of Theoretical Biology found that pink noise appears to help people reach deep sleep, while another in 2017 published in Frontiers In Human Neuroscience noted that it can help memory in older adults.

Overall, white noise may be a good short-term solution for helping your sleep or allowing you to concentrate on a task, but it's not a good idea long-term. The best way to help your auditory centers, says Dr. Attarha, is to replace unstructured noises with speech and music. Doing this, she says, "can reinforce the specialized abilities of our cells, and sustain the chemical, structural, and functional health of the brain." It's an argument in favor of listening to Spotify at work rather than miscellaneous background rumblings, and for turning off that white noise machine at night unless you really need it.