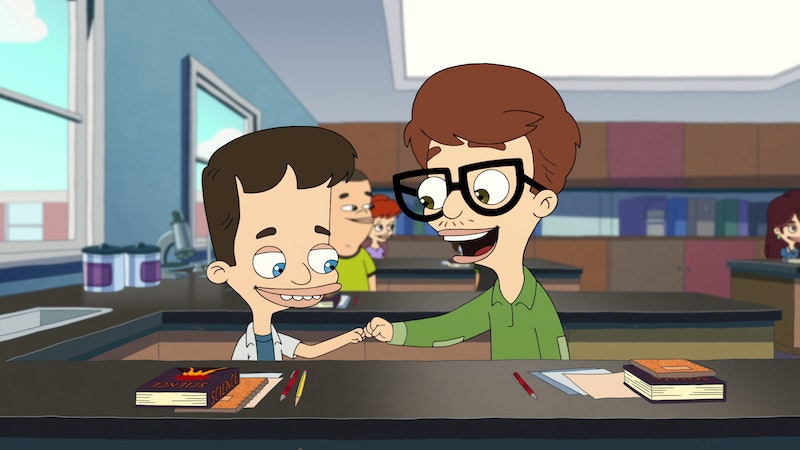 Big Mouth finds humor in the most horrifying part of adolescence. The first season, which premiered on Netflix in September 2017, follows teenagers Nick, Andrew, and Jessi through a parade of confusing experiences, including periods, porn, and premature ejaculation. Big Mouth Season 2 was announced on Oct. 24, but where could the puberty-focused animated series head in 2018? In a phone interview with Bustle ahead of the release of season 1, co-creator and star Nick Kroll says, "I think we have a lot more to explore, and I think there are other ideas and characters that we are interested in that we didn’t have time in 10 episodes to cover."

Kroll says that while Big Mouth takes a look at puberty from the eyes of a few different teenagers in its first season, there are still plenty of experiences that the show can tackle as it continues. Puberty itself is a rich and complicated topic, but Kroll and the other writers are also interested in covering everything that happens alongside puberty — the other stuff that teens experience while their bodies are changing.

"It goes beyond puberty because it’s about kids and about their families and about everything in between," he says.

Season 1 of Big Mouth shows hormone monsters wreaking havoc on the lives of five teenagers, but the show also hints at how people of all ages deal with their own metaphorical hormone monsters. Nick's parents are overly forward about sexuality, Jessi's mother is seen having an extramarital affair with another women, and other adults seem to try and ignore the hormones swarming their children. For the future of Big Mouth, however, look no further than the teenagers that are just a few years older than Nick and Jessi. The show has already proven that puberty is scary, but love and sex are only going to get scarier when the characters get to high school.

While Big Mouth has been forthcoming about the awkwardness of puberty, it's only briefly shown how people's hormone monsters can become actively destructive. In the Season 1 episode "The Head Push," Nick and his friends end up at a high school party. If puberty in middle school is a labyrinth of confusion, then it becomes a battlefield in high school, where people are using each other's sexuality against one another. The high school party episode discusses how in a environment full of hormonal teens, things like slut shaming, harassment, and even assault can arise.

"The Head Push" is possibly the most serious episode in a very silly show, but it provides a clue as to where the series can head if the characters continue to grow up. These characters are changing emotionally as well as physically, and as they continue to age, new, horrifying changes will come alongside them. While the theme of Season 1 seems to be how puberty makes you see the world differently, future episodes could discuss how the world sees someone differently after they've gone through puberty.

It's a scary thing to suddenly be viewed by others as a sexual being, especially for girls like Jessi and Missy. "The Head Push" seemed to be Big Mouth testing the waters to see if the show can handle some of puberty's darkest elements from a comedic perspective. Season 1 of Big Mouth succeeded in making the horrors of adolescence feel relatable for everyone, the upcoming second season of Big Mouth may be able to serve as a guide to treating people that are going through these changes.

Big Mouth has already dealt with some heavy themes while still being a goofy, gut-busting comedy, but the show may have to change alongside its characters — while still packing in frequent sex jokes, of course.

More like this
How The Thanksgiving Episode Of 'Gossip Girl' Changed Pop Culture History
By Gabrielle Bondi
Elizabeth Debicki On Her Approach To The Most Debated Scene From 'The Crown'
By Grace Wehniainen
Liz Feldman Explains The 'Dead To Me' Series Finale & Fan Theories
By Brad Witter
In 'The White Lotus,' Leo Woodall Gets His Moment
By Gabrielle Bondi
Get Even More From Bustle — Sign Up For The Newsletter