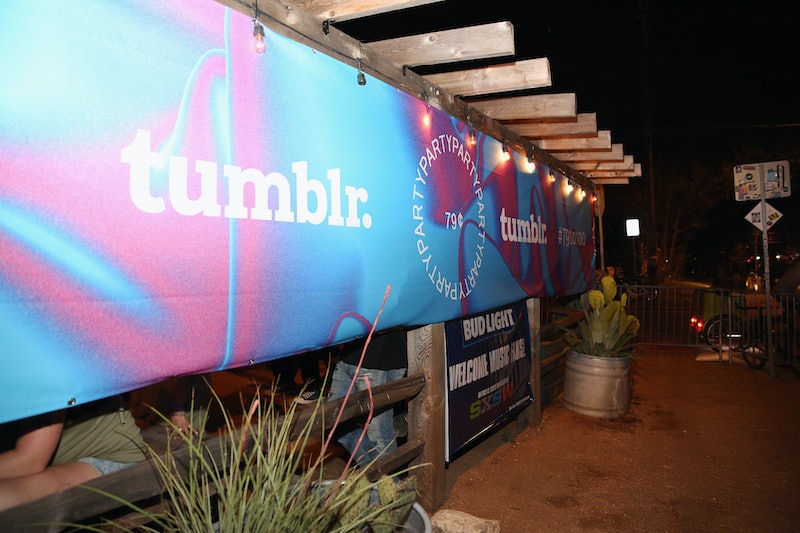 Tumblr lovers across the world are in for some big news: the social networking platform was sold by Verizon, according to The Wall Street Journal. Automattic Inc., the company behind WordPress, was the one to buy it. And though most of the details around the sale are being kept on the down low, a little has been confirmed by the CEO of Tumblr's new parent company. So if you're wondering what will happen to your Tumblr account, it doesn't seem like much will change for now.

In a statement to The Wall Street Journal, Matt Mullenweg confirmed that Tumblr will undergo no major changes as a result of the sale. “It’s just fun,” he said. “We’re not going to change any of that.” Mullenweg further explained that he viewed Tumblr as a companion to WordPress.

For those Tumblr users who are already concerned for the safety of their account, you can rest assured that there has been no publicly stated intention to change anything to your account, or to the site in general. In fact, Tumblr released a statement on the sale via the Tumblr staff page, which read in part,

Automattic shares our vision to build passionate communities around shared interests and to democratize publishing so that anyone with a story can tell it, especially when they come from under-heard voices and marginalized communities. We look forward to continuing to create products that empower your self-expression and sense of community and that build a better, more inclusive internet.

To The Wall Street Journal, Mullenweg did offer one specific detail about what they're definitely holding on to. Specifically, the explicit content ban that went into effect on the site earlier this year, leading to a mass exodus of users from the site.

The adult content ban on Tumblr has been an extremely controversial new policy for the site. In December 2018, the site announced it would no longer allow any NSFW content, which included any images with female nipples visible, as well as any sexually explicit photos, videos, or memes. According to Mashable, the site lost nearly a third of its users after the ban went into place.

But if you're one of the users who does still go on the platform, you shouldn't expect to see any major changes in the immediate future.

There's been no confirmation from Automattic regarding the price it paid for Tumblr. However, several publications have reported it to be far less than what it was sold for several years ago. According to Engadget, Yahoo bought Tumblr in 2013 for $1.1 billion. And according to Axios, Automattic bought Tumblr for below $20 million this week.

As Axios notes, Tumblr still hosts over 450 million blog pages, regardless of what it sold for. Celebrities like Taylor Swift are still using Tumblr to interact with fans on an intimate and frequent level. So there are plenty of Tumblr communities which are still thriving on the platform — and though it's entirely possible that certain aspects of Tumblr will change under new ownership, many notable Tumblr users are lauding the change.

David Karp, a former CEO of Tumblr, tweeted of the deal, "Just wanted to add my congratulations and thank you to everyone at WordPress and Tumblr." Karp continued, "Matt is a visionary, and the team at WordPress has built something absolutely foundational to the Internet. What an amazing home and opportunity for Tumblr."