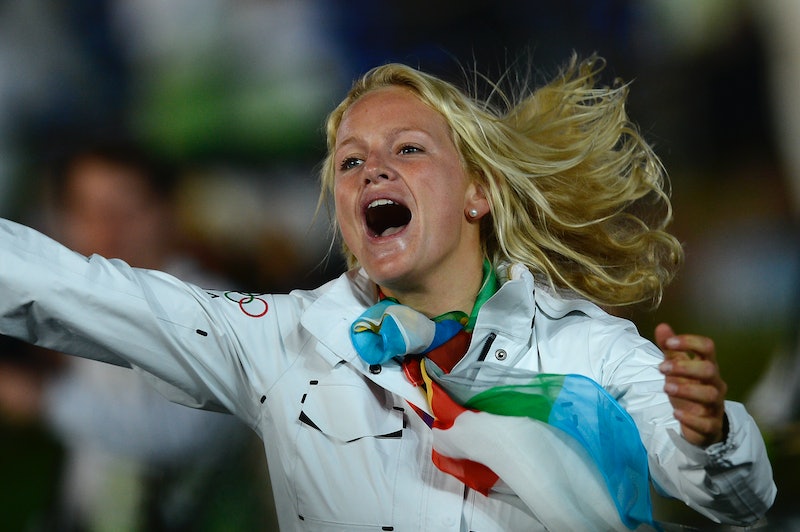 The International Olympic Committee announced on Tuesday that Russia would be banned from competing in the 2018 Winter Olympics in Pyeongchang due to a "systematic manipulation" of anti-doping rules. There is, however, one caveat: individual Russian athletes can compete in neutral uniforms on their own.

According to the IOC, which announced the ban in a press conference on Tuesday, "clean athletes" (i.e. those who qualify and aren't found to have used performance-enhancing drugs) will be able to compete under a neutral flag — the Olympic flag — with neutral uniforms. The neutral uniforms will include the words, "Olympic Athletes from Russia," with the acronym OAR.

It's unclear what exactly the uniforms will look like, though a look at past neutral uniforms offers some insight. In 2012, Nike designed uniforms for four athletes whose countries didn't have recognized National Olympic Committees. Like the Russian athletes who qualify in 2018, these athletes competed under the Olympic flag; if they won medals, the Olympic anthem was played and their home countries were not given credit for the medal in the standings.

Nike would not confirm to Bustle whether it would be designing the neutral uniforms, though the blog Inside the Games has suggested that the company has already been tasked with the job.

Nike has a history of creating uniforms for U.S. athletes and has signed a deal with the IOC to supply uniforms and products to members and staff of the committee.

Typically, though, countries compete in uniforms designed by local designers. In previous games, Russian athletes have competed in uniforms designed by BOSCO Sport, though that company was replaced by the Moscow-based ZA Sport earlier this year. An eight-year deal with ZA would have seen Russian Olympians wearing the company's products at all future Olympic Games until 2024.

In late November, Russia unveiled what would have been its official uniforms for Pyeongchang, the first collection designed by ZA Sport. The athletes' uniforms were launched even as reports suggested that the country would likely be banned from competing in the upcoming games.

Interestingly, many of the pieces in the collection seemed to make light of the doping allegations. One item tweeted by the Russian Olympic Committee was a sweatshirt emblazoned with the words, "I don't do doping. I am ZA Sport." Another shirt said, simply, "Russians did it!" Due to the doping scandal, however, those uniforms won't be worn by Olympic athletes — at least, not while they're competing.

The doping allegations against Russia were first surfaced by The New York Times, which reported in 2016 that Russia coordinated an elaborate state-run doping scheme during the Sochi Winter Olympic Games in 2014. Russian officials have been accused of sneaking into laboratories to swap the urine samples of competing athletes. According to IOC officials, Russia's doping scheme is also alleged to have occurred during the 2012 London Olympics.

The Russian athletes allowed to compete in 2018 will be determined, according to the IOC sanctions, by a panel chaired by the head of the Independent Testing Authority and will have to undergo all pre-Games testing recommended by a task force advising anti-doping efforts before Pyeongchang. It's worth noting that Russian officials have said the country would boycott the games if the IOC imposed such harsh sanctions.

In addition to wearing neutral uniforms, any medal won by an OAR at the 2018 Olympics will not be credited to Russia. The Russian flag will not be displayed, nor will the anthem be played in those cases; instead the Olympic flag and anthem will be used.