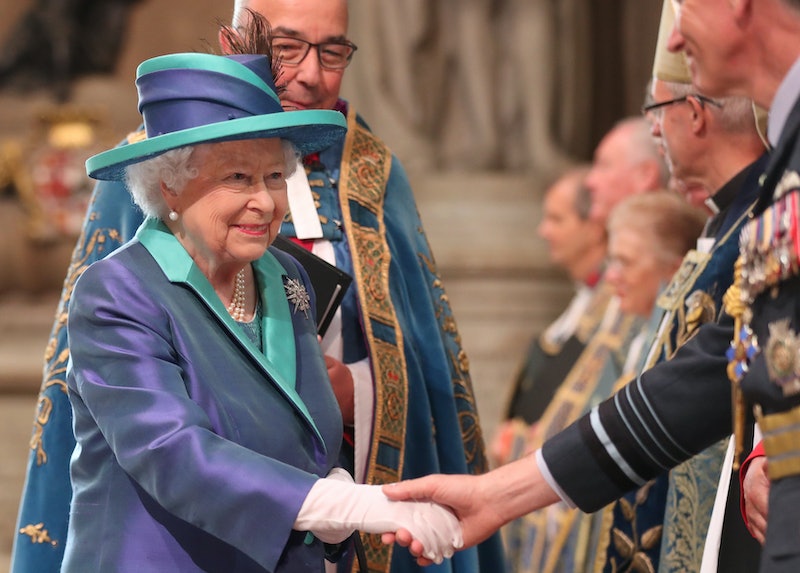 This week, President Donald Trump will visit the United Kingdom for the first time as president. Trump's visit is slated to last for four days and, during that time, he will meet with the prime minister as well as the Queen. If you're wondering what Trump and the Queen will talk about during his visit, unfortunately a specific agenda of what their meeting will entail is not available.

As the Evening Standard reported, Trump has a fairly packed schedule for his UK trip. He will fly into the country from Brussels on Thursday, following the NATO summit. The U.S. president, along with the first lady, will then attend a dinner hosted by Prime Minister Theresa May. On Friday, Trump and May will hold bilateral talks on a variety of issues of mutual interest. And, later in the day, Trump, with Melania, will head to Windsor Castle to meet with the Queen.

As USA Today reported, Trump's visit with the Queen will likely not be exceedingly formal. Windsor Castle is the monarch's home, at which she spends most weekends and, as a result, the meeting will likely have a more relaxed tone. As the paper pointed out, the meeting is not considered a state occasion. The outlet also noted that, because the gathering will take place in the afternoon, it is quite likely that tea will be served at the event.

Neither the Queen nor the White House have released information regarding what Trump and the UK's monarch might discuss during their meeting. However, the U.S. Ambassador to the UK, Robert Wood Johnson, did express that a meeting between a U.S. president and the Queen holds great significance. As the ambassador told Sky News back in June:

Yes, yes, I mean he has to see the head of state ... Putting his foot on British soil, it's Job 1, it's very important, very symbolic ... Meeting Her Majesty is the most important thing, because she's the head of state, and from then on, it'll be what the president wants to do.

USA Today also reported that Ambassador Johnson told reporters during a White House press call that the Queen has met with every U.S. president since 1952, save Lyndon B. Johnson. He also emphasized that Trump and Melania are "really looking forward to meeting her."

According to the UK's The Independent, Trump will likely be expected to follow some royal protocols when meeting with the monarch, though these protocols do not appear to be too stringent. As the paper explained, Trump will likely be expected to bow slightly when meeting the Queen and to wait for the Queen to offer her hand first for a handshake. He will also probably be expected to address the monarch as "Your Majesty" or "Ma'am." However, The Independent noted that, in recent times, the royal family has become rather relaxed about etiquette rules. Indeed, its own website asserts that, "There are no obligatory codes of behavior when meeting The Queen or a member of the Royal Family, but many people wish to observe the traditional forms."

Trump's visit to the UK will occur in tandem with expected widespread protests in London to denounce his visit and presidency. As Owen Jones, a lead organizer of the protests, told Time, protesters are seeking to " ... show the world what millions of people in this country think of the bigotry and the hatred that he [Trump] represents.”

Trump plans to leave the UK on Sunday, July 15, wrapping up his trip with a visit to Scotland.