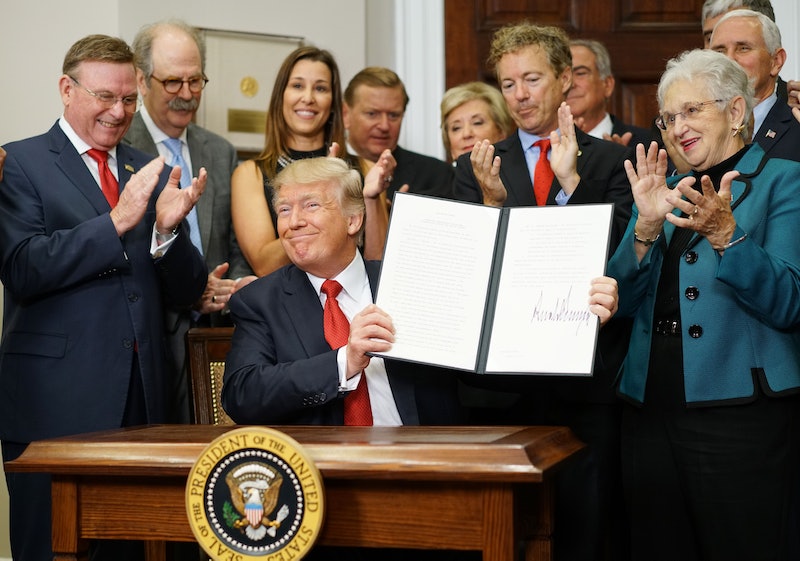 In an effort to make good on his promise to dismantle Obamacare, President Donald Trump signed an executive order Thursday that he said represented "the first steps to providing millions of Americans with Obamacare relief." The executive order lifts consumers' limits on short-term policies and directs agencies to begin looking into ways small businesses, and potentially even individuals, could collaboratively buy insurance plans. The president's order follows multiple failed attempts by Congress to repeal and replace the health care law.

Trump spoke Thursday from the White House and claimed that that today was only the beginning:

With these actions, we are moving toward lower costs and more options in the health care market and taking crucial steps towards saving the American people from the nightmare of Obamacare. Today is only the beginning. In the coming months, we plan to take new measures to provide our people with even more relief and more freedom.

This is going to be something that millions and millions of people will be signing up for, and they're going to be very happy. This will be great health care.

In brief, Trump's executive order directs federal agencies to begin developing policies aimed at enabling the ability to pool together and buy what are known as association health care plans. The order also moves to enable consumers to purchase short-term policies that are not required to meet Obamacare protection regulations for people with pre-existing conditions.

Yet the full impact of Trump's executive order isn't immediately clear and changes outlined within it could take at least six months to come into effect, a senior Trump administration official reportedly told CNN. In fact, the order's impact will heavily depend on the nature and extent of the regulations written as a result of it.

However, critics have warned the order could serve to significantly undermine Obamacare. In increasing the availability of plans not tethered to Obamacare regulations, Trump's executive order could draw healthy people out of the Obamacare exchanges and thus cause Obamacare premiums to skyrocket or more insurers to leave the market.

Having failed to repeal the #ACA in Congress, @POTUS is using a wrecking ball to singlehandedly rip apart & sabotage our healthcare system. @POTUS' exec order couldn't be further from his "great health care" promise. It will up costs for seniors & ppl w/ preexisting conditions. And it will add further chaos to the markets. If the system deteriorates, make no mistake about it, the blame will fall squarely on @POTUS.

A senior official at the Kaiser Family Foundation has also spoken out against the president's executive order. "The clear intent of the President's executive order is to deregulate health insurance," Larry Levitt, senior vice president for special initiatives at the Kaiser Family Foundation, said in a series of tweets Thursday. "How far it's able to go remains unclear."

The executive order envisions loosely regulated plans that offer cheaper and skinnier insurance to those who are healthy. How much damage the executive order can do to insurance markets under the ACA will depend on arcane details in regulations yet to come.

Levitt also slammed the vagueness of the president's executive order, noting that it left "some big questions still unanswered" and would likely cause confusion.

The executive order won't change anything for the upcoming open enrollment period, but the confusion it creates could depress enrollment.

Although the president's executive order could potentially have a significant impact on Obamacare, it does not function as a means of repealing or replacing the health care law as Trump has long promised he would do.

According to Vox, Andrew Bremberg, assistant to the president and the director of the Domestic Policy Council, told reporters at the White House Thursday:

The president still firmly believes that Congress must act to repeal and replace Obamacare, but before that can be done, this administration must act to provide relief.

Bremberg said the Trump administration expected the policy changes resulting from the president's executive order to "potentially benefit tens of millions of Americans over time."

But while Congress' recent attempts to repeal and replace Obamacare have all failed, Trump's executive order could represent a major threat to the health care reform law.