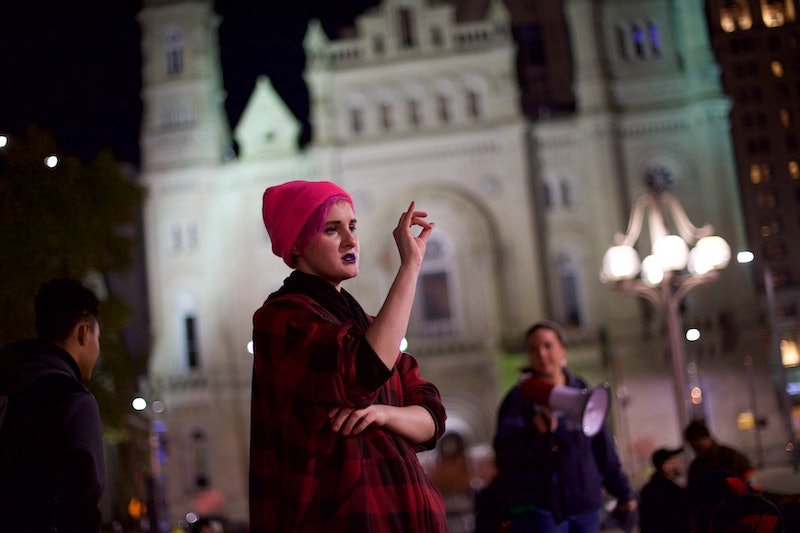 As we face down the inauguration of President-elect Donald Trump, whose administration has promised to assault civil and reproductive rights in America so intensely that Human Rights Watch has listed his rhetoric as a threat to "basic rights protections," now is an important time to reflect on the strength of the many who have managed to navigate (indeed, even overcome) assaults on their sexuality, self-governance, and cultural practices with aplomb. In short, there is a tremendous amount we can learn right now from our country's communities of witches.

To understand why this is, it’s important to note that the notion of a “witch” has morphed radically in the last few decades. Beyond pop culture’s (sometimes alarmingly narrow) symbolic appropriation of the witch to represent the liberated woman, there exists a growing subset of individuals who have found empowerment in their witch identities. A fantastic 2015 feature at Vice profiled how LGBTQ youth have found sanctity within their witch communities in the face of society’s failure to create spaces for them.

“Witchcraft entered the feminist consciousness spiritually, though traditions like Wicca, and politically, as groups like WITCH — the Women's International Terrorist Conspiracy from Hell — publicly hexed everything from beauty pageants to fees for public transit,” wrote Moira Donovan in Vice. “But the idea of the witch has come a long way since then. Witchcraft is seeing a resurgence among queer-identified young people seeking a powerful identity that celebrates the freedom to choose who you are.”

“Witches have always lived ... at the margins of society, and there is so much folks can learn from them because of this.”

For centuries, across countless cultures, there has been a conflation of sexuality, independence, and holistic healing with witchcraft. This has led to the massacring of thousands of innocent women. (And make no mistake, literal witch hunts are still very much a tragedy of the present day.)

But today, a different kind of witch hunt has emerged in our country, one which uses rhetoric about "traditional values" to further marginalize already-disenfranchised groups — women, people of color, and LGBTQ individuals among them. At a moment like this, we can all look to witches (regardless of our own spiritual practices) for insight about how to navigate these threats. That's because the culture of witches is a culture of survival.

“History has not been kind to witches,” Elissa Hall, an acquaintance and Portland-based green witch, tells Bustle by email. “However, if you look at the Salem witch trials, for example, the 'witch' label was often an accusation used in the interest of colonization. Women who did not conform to societal expectations were accused and punished. If a woman didn't go to church enough, pissed off her husband, attempted to be economically autonomous, sexual, or simply was black, that woman was immediately suspect for witchcraft.”

“When I was younger, in school, kids would often call me witch, lesbian, and feminist,” Hall writes when asked about her identity as a witch, echoing my own experiences of being lambasted with labels of “witch” and “lesbian” for bucking traditional ideas of femininity. “They threw these words like insults, and I didn't understand how my behaviors qualified me as any of those words. I liked plants, I didn't want to shave my legs often, I liked [reading] and Frida Kahlo and Yoko Ono. I just thought that shit was the coolest, and one day I was like, maybe I am those things that other kids call me and maybe it's not bad. ”

This disillusionment with the patriarchal status quo and adoption of witchcraft for identifying outside the norm is also echoed by Vanessa Irena, a queer feminist witch based out of Brooklyn. “I don’t know if it’s something I arrived at as much as it’s something I’ve just been discovering about myself my whole life,” she tells me by email. She adds, “Any time a woman stands in her power, there will always be people who see this as a threat. Female power, the female body, and female sexuality have throughout history been treated as something to fear and control. Witches are a perfect example of this.”

“From witches we can learn that magic is available for the empowerment of everyone, no matter what their circumstances.”

And many witches know what’s at stake in a culture that’s seemingly teeming with racism, sexism, white supremacy, homophobia, transphobia, and hatred of every imaginable stripe. “I’m really lucky — I’m a white woman with health insurance and a really strong familial support system,” Gabriela Herstik, an LA-based witch and Progressive Wiccan, tells me by email. “But I’m scared for my sister who’s gay, for my mother who’s Mexican, for all of us because we are Jewish. I’m scared for my uterus, for my birth control, for my friends who are trans and need hormones. I am just fucking scared.”

But in all of their testimonies about the trials of witches — both historically and in modern day society — each of the witches I spoke to were confident that there is a great deal to be learned from witch communities, whatever their iteration.

“A witch is someone who recognizes and owns their power, and witchcraft has historically been a tool of the oppressed/dispossessed,” says Irena. “From witches we can learn that magic is available for the empowerment of everyone, no matter what their circumstances.”

“Witches have always lived in the hedges, at the margins of society, and there is so much folks can learn from them because of this,” Hall tells me. “It's a guarded, powerful craft. We possess lots of knowledge about self-sustainability. The ability to identify, grow and forage plants for medicine, food, and magic is so politically radical, in my opinion.” She adds, “We need witches right now, and while Trump's election is disastrous, it is a call to action for witches, at least for me personally. It's time to unleash that power we've been cultivating because there is so much to protect.”