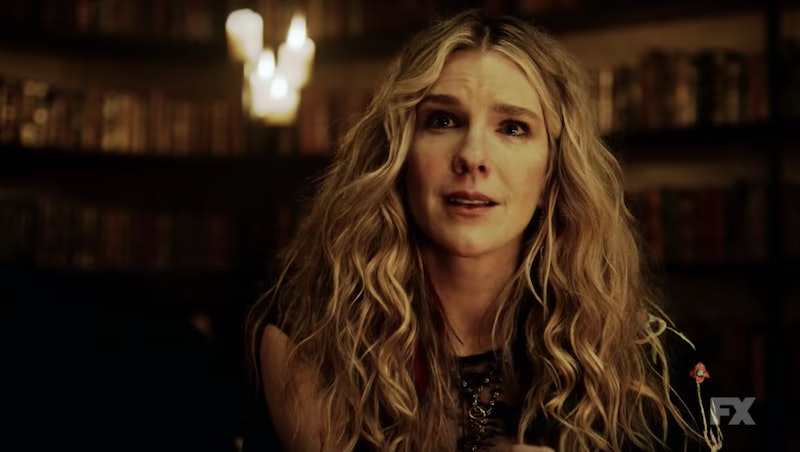 Since creator Ryan Murphy announced the information in January, per TV Line, fans knew that Season 8 of American Horror Story was going to take place in the future. Then, the post-apocalyptic theme was revealed, and now, the first episode of the new season has come and gone. But there remains no clear answer as to what year it is in AHS: Apocalypse. Fans who know Murphy know that the omission of that information was, likely, very intentional, but that doesn't mean they don't have their speculations.

On April 6, Murphy spoke at an Emmys panel, per Vulture, during which he revealed that Season 8 would take place "18 months from today." Naturally, that sent theorists digging, and it led some to believe Apocalypse would take place in October 2019. One theorist even pointed out that the exact 18 month point, October 6, 2019, would be the 58th anniversary of when President John F. Kennedy advised Americans to take shelter from nuclear war — which makes sense, considering the season premiere sees nuclear bombs rain from the sky.

Here's the catch — mid-episode, the time is fast-forwarded 18 months into the future, which, one can assume, is where the majority of the season will take place. That seems to cross Murphy's initial hint off the list — Apocalypse, indeed, takes place 18 months in the future from the first few minutes of the inaugural episode. But that still doesn't reveal the exact year in which Coco St. Pierre Vanderbilt and friends are cynically welcomed to Outpost 3 and served Stu's Stew for dinner.

Thankfully, the robust gallery of AHS content that Murphy has provided over the last eight years leaves fans with what seems like endless content to scour for easter Eggs. And, surprise, one of them has a pretty plausible theory for a more realistic time projection.

The user, Boneil0898 on Reddit, points out the same aforementioned reasoning the 18-month theory can't work — now that the first episode has aired — and goes on to point out additional plot holes that lead them to their ultimate conclusion. "Billie Dean Howard having visited the Hotel Cortez in the year 2022, the world, and by extension the Hotel, being destroyed in 2019 makes no sense for the timeline," the user wrote. "Could be a continuity error, or could be a subtle hint the season is set further in the future than we thought."

The user also points out that Murder House, in which Michael Langdon (the baby antichrist) was born, took place in 2011. For Michael to return in 2019 and appear to be an adult, doesn't make sense. With that, the user speculates that Michael appears to be at least in his 20s, so it's safe to assume the season is set in around 2031. "This would set it in the close future, while also allowing the timeline of events such as Michael's age and Billie Dean's visit to the Hotel to still occur," the user wrote. "It would also allow for the ninth and tenth seasons, that have already been renewed, to occur in the year of their release undisturbed."

Other Redditors clapped back in disagreement, claiming that references like Coco's use of Instagram, Nana's "fake news" comments, and the Hawaii missle alert that appeared in the first episode make it seem like the story takes place in present day, or close to it.

Which of these theories is correct remains a mystery, though. Probably just as Murphy intended it. As always, the official information will be revealed exactly when it's supposed to be.