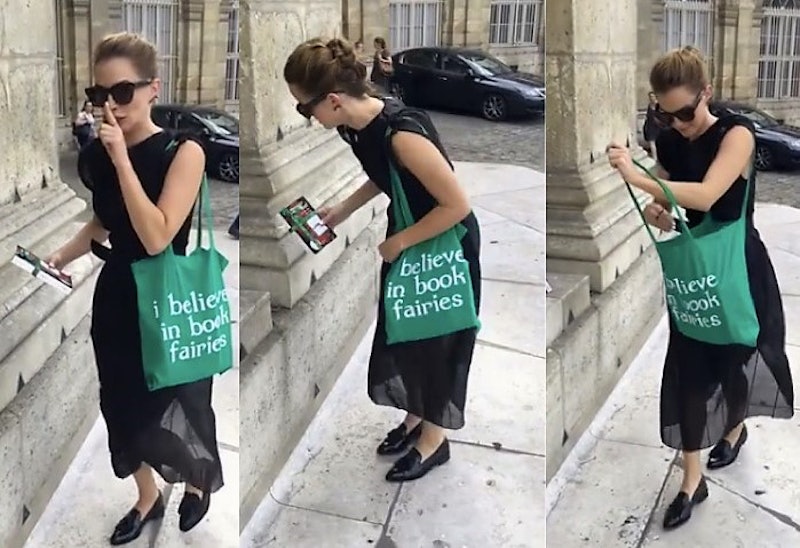 If you’re half as in love with Emma Watson as I am, then chances are you’ve caught an Instagram post or two of the actor secreting around global cities, hiding books on the London tube, Paris sidewalks, or New York City memorials. But the gal book-lovers will forever recognize as Hermione Granger isn’t the only person leaving book surprises around town for unsuspecting readers — she’s hiding reads like Maya Angelou’s Mom & Me & Mom, Marjane Satrapi’s Persepolis, and Margaret Atwood’s The Handmaid’s Tale for an organization called The Book Fairies. And you don’t have to have celebrity status to become a Book Fairy yourself.

If you’re one of the lucky few readers who have already stumbled across a green-ribbon-wrapped read, then you’re probably familiar with who The Book Fairies are, and what they do. With the sole mission of helping more books get into the hands of more readers, The Book Fairies are team of global book lovers whose job is simple (and super fun.) Operating in over 100 countries to-date, and in tons of different languages, The Book Fairies leave behind new or used books for people to find: anywhere, and everywhere.

The project was inspired by Books on the Underground, a London-based organization that focused on hiding copies of books on London’s public transportation system. The idea is that a traveler finds the book, takes it with them to read (maybe snapping an Instagram pic or two along the way,) and then returns the book to the London underground for the next reader to find. As more book lovers became involved, the organizers of Books on the Underground started calling their helpers book fairies — and thus, the now-global mission The Book Fairies, was born.

The project gained steam when Watson, founder of the online book club Our Shared Shelf and all-around badass supporter of feminist literature, joined the ranks of The Book Fairies this past March, for International Women’s Day, when she helped hide over 1000 feminist books in public spaces from London to New York City.

So now that you know what The Book Fairies are all about, how do you actually become a Book Fairy yourself? Good question. We’ve got some tips below.