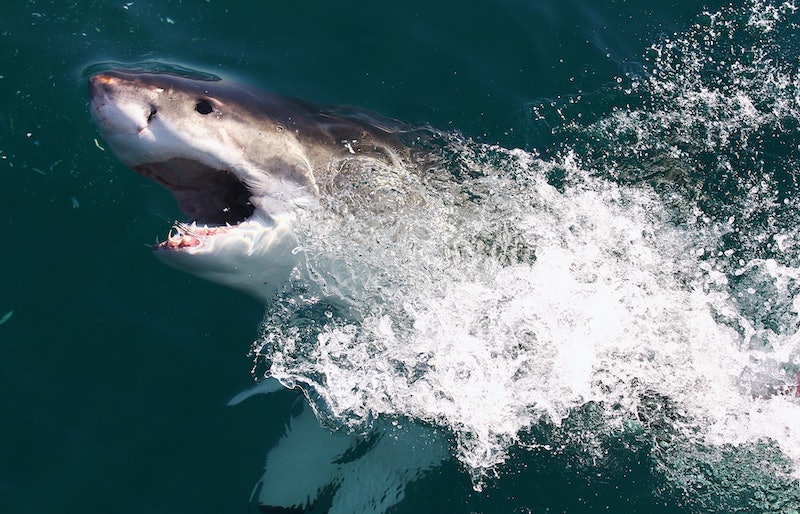 It's the most wonderful time of year, because, for one full week, Discovery Channel allows shark and ocean nerds to marathon documentary after documentary about some of the most misunderstood animals on earth: Sharks. The 2017 Shark Week lineup is chock-full of highly anticipated and much-hyped events like Phelps vs. Shark, but even the more science-y documentaries like Shark Vortex seem fascinating — especially when you learn what a shark vortex is.

There isn't a ton of research about the topic just yet, but the Shark Week special is sure to delve into all its complexities. Before you watch, though, I've compiled a bit of an explainer. And, if you're like me and call New England home, then the shark vortex is certainly something that you'll want to know about before you dive into the Atlantic with reckless abandon (as one does). According to Discovery Channel's description of the special, the shark vortex is the name given to a puzzling migration pattern that brings 30 different species of sharks (yes, 30) to New England's shores each summer, The sharks seem to be using the movement of the Gulf Stream to hitch a ride north, where they hang for the summer like Kennedys. Honestly, it feels like they are just listening to TripAdvisor or something, because New England really is one of the best destinations to visit during the warmer months (not that I'm biased or anything). Did I just solve the mystery of the Shark Vortex?

Jokes aside, the term vortex refers to "a whirling mass of water, especially one in which a force of suction operates as a whirlpool." So, it makes sense that this particular phenomenon, where sharks are being aided by the thrust of the Gulf Stream, would be called a vortex-like event.

The Shark Week special will feature Joe Romeiro and Greg Skomal as they chart this annual migration and focus specifically on the great white shark, the mako, and the rare porbeagle shark. Romeiro and Skomal are just the experts to take viewers on this journey, because they are both well-known in the shark conservation world and Skomal has New England ties to Massachusetts. Romeiro is the co-founder of 333 Productions, which produced Shark Vortex and was formed in part out Romeiro's love for sharks. According to its About page, 333 Productions seeks to create films that aid in the conservation of sharks and marine life in general. The other half of this dynamic duo, Skomal, is a marine biologist, photographer, and author who comes from my home state of Massachusetts. Currently, he is leading the Massachusetts Shark Research Program and recently wrote the bible for shark enthusiasts, The Shark Handbook.

Check out Shark Vortex Monday, July 24 at 8 p.m. on the Discovery Channel to see this fascinating congregation of 30 shark species. And, be grateful you're watching from the comfort of your own home which is fortunately in the waters off New England.