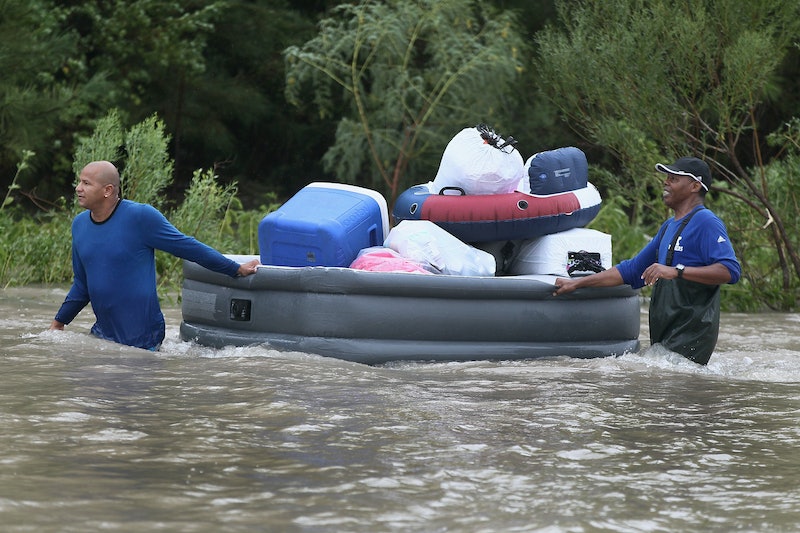 Most people are aware of the dangers of a flood, but many might not think about how the contents of the actual water surrounding them could be dangerous. So, what is actually in floodwater? Bacteria, oil, and even sewage are known to be found in floodwaters, and can cause serious health concerns.

Aside from the dangers of drowning, electrocution from fallen power lines, or even lurking predatory animals, floodwaters can cause much more inconspicuous, but still very serious health hazards. The water that builds during severe flooding absorbs its surroundings, meaning any bacteria, pesticides, sewage, or other chemicals and biohazards that it sweeps over is now carried along with the current.

The Center for Disease Control has extensive resources on the health dangers that can stem from floodwaters. Tetanus can be an issue if certain soil-borne bacteria are mixed into flood waters, and the water comes in contact with an open wound. Other infectious diseases like giardiasis and norovirus can also spread if certain bacteria are present in the water.

Trench foot is an infection that comes from spending too much time with your feet submerged in water; that's hardly avoidable when your town is literally underwater. But a big concern that the agency stresses is stomach-related illness due to bacteria in the water. Stomach pains and diarrhea can be common complaints in disaster areas, due to exposure to unsafe water.

I can tell you from firsthand experience that flood waters are so much more than just H20. Even more than a week after Hurricane Sandy struck my town, the block I lived on reeked of gasoline. My neighbors had filled their propane tanks days before the hurricane, which then knocked over and poured into the rushing flood waters during the storm surge. The prevalence of boats in the area also contributed to the seepage of gasoline into floodwaters, which then dispersed throughout the neighborhood. Everything in my home that had touched flood water had the distinct smell of gasoline on it.

Working as a reporter in the aftermath of Sandy, I had distraught people tell me how their homes flooded from the inside... with sewage. Extreme flooding had caused the local sewage plant to break down, which not only dumped tons of raw sewage into waterways, but also caused sewage to back up through shower drains and toilets, and literally flood people's homes with excrement. A compounding nightmarish scenario when you consider both what was going on inside people's homes, as well as outside.

After the worst of the storm clears and you return to your home, to keep yourself safe, the CDC recommends keeping children out of affected areas until after clean up is complete, wearing rubber gloves and boots when handling items that touched floodwaters, throwing away things with absorptive materials, since they cannot be sanitized, and boiling the water you use to wash your hands.

Better to take the utmost precautions when dealing with unavoidable, yet bacteria-laden floodwaters, than to risk infection and illness.