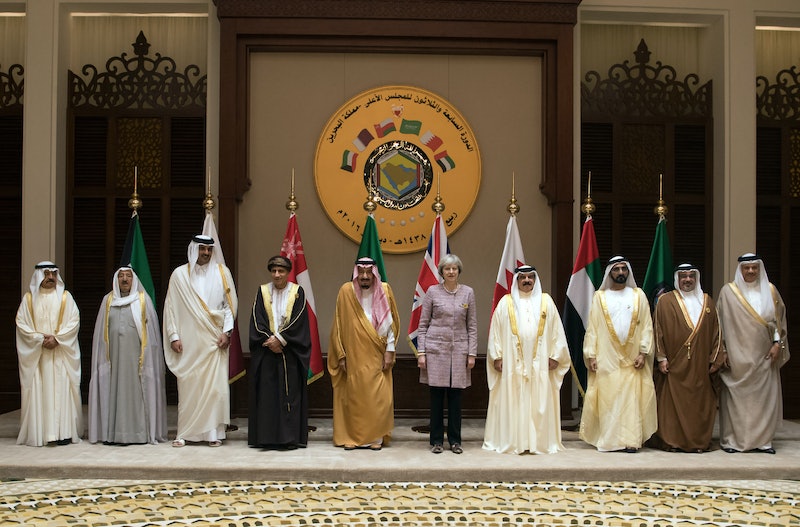 News that half a dozen countries in the Middle East will cut diplomatic ties with Qatar has thrown the region in turmoil. The Tuesday announcement could have significant consequences for everything from the fight against terrorism to oil prices, and if you're wondering just what is going on in Qatar, it's important to first understand the complex relations between the Gulf countries.

Saudi Arabia, Egypt, the United Arab Emirates, Yemen, Bahrain, and the Maldives have all decided to freeze out the wealthy country, causing a potential crisis for Qatar. The reported issue at hand in the argument between the Gulf states is regarding the Muslim Brotherhood, a highly controversial group that advocates for Islam in public life. The group officially condemns violent extremism but has links to other Islamist groups that have committed violent acts in the past, making it a point of contention for countries around the world.

The Qatari government is closely aligned with the Muslim Brotherhood, having hosted one of its top clerics and giving him a platform on their state sponsored media outlet Al Jazeera. It's based off of this alleged support for terrorist groups that the six countries have decided to drastically shift their foreign policy.

"Since 1995, the Kingdom of Saudi Arabia and its brothers have made strenuous and continued efforts to urge the authorities in Doha to abide by its commitments and agreements," the Saudi government said in its official statement announcing the diplomatic severance. "Yet, they have repeatedly violated their international obligations and the agreements they signed under the umbrella of the Gulf Cooperation Council (GCC) for Arab States to cease the hostilities against the Kingdom and stand against terrorist groups and activities of which the latest one was their failure to implement Riyadh Agreement."

However, the perception of the Muslim Brotherhood as a terrorist group is highly subjective. The organization's American chapter most typically supports the establishment of mosques and Islamic schools while staying away from politics, according to NPR. Some politicians, such as Texas senator Ted Cruz, have pushed to add the Muslim Brotherhood to the U.S.' official list of terror organizations, but a recent British intelligence report found that the group doesn't actively engage in terror activities.

One of the factors at play here may also be Qatar's close relations with Iran; it certainly contributes to the timing of the coordinated withdrawal from diplomacy across nations. U.S. military officials told CNN that the move to cut ties with Qatar is being seen as an anti-Iran tactic. According to the outlet, the Gulf countries were spurred to take action against Iran following the $110 billion arms deal that strengthened ties between Saudi Arabia and the United States last month.

In terms of foreign policy, the U.S. is now stuck between a rock and about four different hard places. Qatar is home to the largest U.S. military base in the United States, and it could pretty quickly decide that that no longer serves in its interests. American citizens aren't especially big fans of Saudi Arabia, as evidenced by the reaction to Trump's trip there to make the arms deal, but Iran isn't at the top of our list of allies, either. However, as Trump is trying to increase ties with Russia, which is aligned with Iran, the U.S. could face some pushback from Moscow as well.

The future of the Gulf states' alliance is critical to the world's oil and gas supply, so resolving this diplomatic crisis is exceptionally important. But that could be much easier said than done with factors such as terrorist attacks and climate change taking up most of the room on the world's political stage. This new movement in Middle Eastern relations seems certain to produce some kind of substantive change in international policy, but whether it will be productive or destructive is as yet indeterminable.