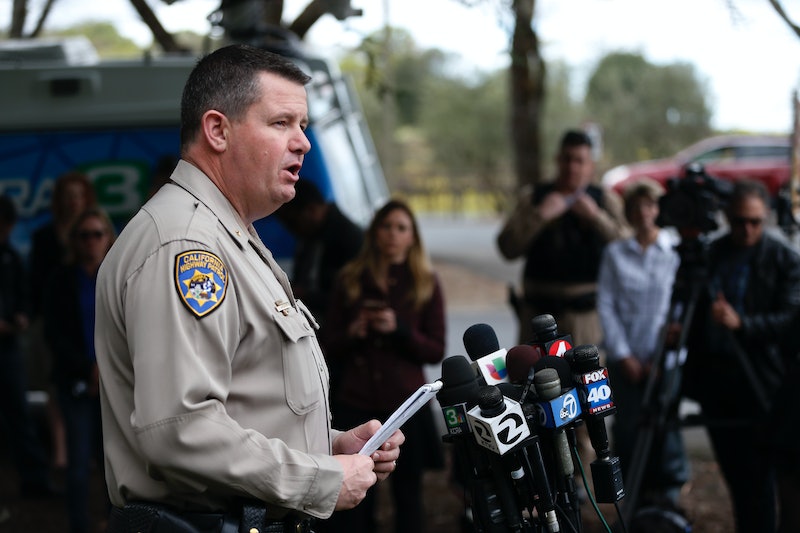 An armed gunman has reportedly taken hostages at a veterans home in Yountville, California, leading to an hours-long standoff with law enforcement. The gunman, whose identity is not currently known, is reportedly holding three people hostage inside the Veterans Home of California, a state-run facility in Yountville, an incoporated town in the northern California's Napa County. There have also been reports of shots being fired inside the facility.

Update: According to California Highway Patrol Assistant Chief Chris Childs, the gunman and the three hostages have been found dead. The gunman has been identified as a former soldier and a former patient at the home. All three hostages killed were women who worked at a mental health program in the home.

Earlier: It's always important to remember that early news reports can be prone to error in the midst of chaotic and potentially violent events like these, so it's important not to jump to premature conclusions about what precisely is happening and why. That said, the hostage incident has reportedly been ongoing for hours, and began after the suspect engaged police in a shootout at about 10:30 a.m. local time. There have so far been no reports of fatalities in the standoff, although as of 4:00 p.m. local time, the Veterans Home of California reportedly remains on lockdown.

The Veterans Home of California is notable for being the single largest state-run facility of its kind in the entire country. First established in 1884, the campus reportedly provides housing to approximately 1,000 veterans of wars dating back decades. According to The Mercury News, the suspected gunman is themself a military veteran who's been undergoing treatment for post-traumatic stress disorder, or PTSD.

CalVet, the state's Department of Veterans Affairs, released a statement on Twitter slightly less than one hour after the reported shooting, stating that it was aware of the standoff and was cooperating with the police.

"Law enforcement is at the Yountville Veteran’s Home right now following reports of gunfire," CalVet tweeted on Friday morning. "The safety of our residents, workers and the community is our top priority. We have activated our emergency response protocol and are cooperating with law enforcement."

Calvet also tweeted out a phone number to call for families seeking information regarding the facility's staff or residents, (707) 948-3331. Similarly, Bay Area Fox affiliate KTVU also tweeted out the number, which directs to the California Highway Patrol.

According to The Mercury News, law enforcement has said there's "no other public safety threat" outside of the hostage standoff at the veterans home. The type of firearm the gunman is using has not been confirmed, but the paper describes it as a "unspecified rifle."

It also quoted Jim Thomas, the vice president of the Veterans’ Group at the Yountville home, who bemoaned the lax front gate security at the facility.

There should be a gate guard,” Thomas told The Mercury News. “Anybody can walk into this property with an AR-15 or some other weapons and go to our dining hall, kill 300 people in one meal. We’ve complained for years here and the people at CalVet in Sacramento don’t seem to be willing to do any of that."

Napa County is approximately 36 miles north of San Francisco, part of the beautiful and bucolic Northern Californian wine country. On the official CalVet website, the Veterans Home of California Yountville is described as a "focal point" for the Napa County community, thanks to its many amenities.

The Yountville Home is also a focal point for the Napa Valley Community with the 1,200 seat Lincoln Theater, a 9-hole golf course, Borman Field baseball stadium, bowling lanes, a swimming pool, and a military Base Exchange branch store.

Law enforcement authorities had reportedly planned an update on the situation to take place at 5:00 p.m. local time, but according to Sacramento's CBS affiliate, the update has been pushed back an hour to 6:00 p.m. local time.