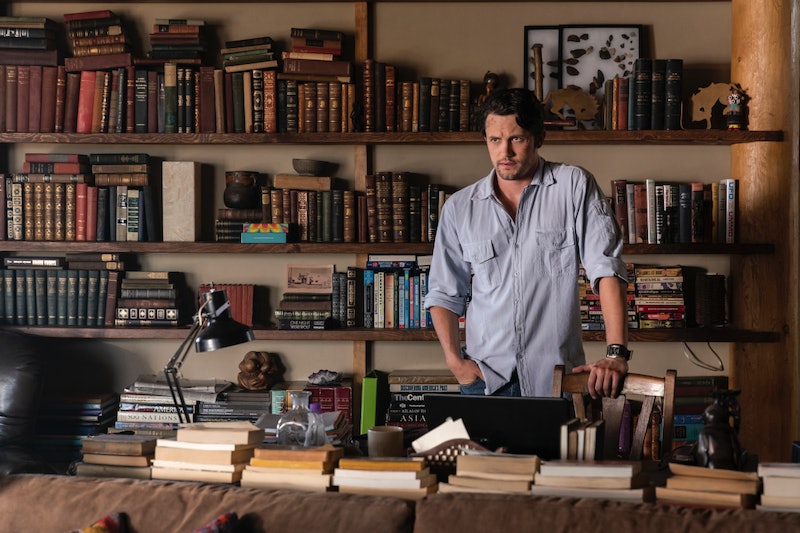 Spoilers ahead for Roswell, New Mexico Season 1, Episode 3. Ever since Max saved Liz's life in the the Roswell, New Mexico pilot, his alien powers have not exactly been working right. He's prone to flickering the electricity around him when he feels pent-up or overwhelmed, but his stress levels seem outside of his own control lately. And in the Jan. 29 episode, it becomes clear it's not just a sudden onset anger thing: Max's powers are glitching so badly that he actually blacked out the entire town.

So, what's going on? Earlier in the episode, Liz accused Max of killing Rosa, and not only did he tell her he didn't, he confessed that he'd been in love with her for pretty much his entire life. Both of those are pretty huge emotional triggers — being accused of murder and telling the women you love how you feel would be enough to set anyone over the edge. Is it possible, then, that the blackout is just the result of all that anxiety releasing?

Maybe, but right before his uncontrollable emotional outburst blacked out the electricity in Roswell, he called Michael for help and asked that he come over ASAP. It really seems as if something is wrong — something much deeper — that started when Liz came back to town. Here are a few theories to ponder until we get more answers.

He Needs To Recharge

Both of Max's siblings indicate that saving someone's life was crossing a line, but maybe that wasn't just because he blew their secret cover. Maybe saving Liz took too much out of him, and that's why his powers are on the fritz.

Liz Has Powers Of Her Own

This started when he saved Liz's life, right? Not to make this too Twilight (you know, that thing where Edward could read every mind but Bella's for whatever reason), but it's only natural to assume in a supernatural world that Liz could be bringing her own abilities to the table. In the original Roswell series, Liz did get alien powers from Max after he healed her, but there was nothing about his own powers being affected.

Further adding to the suspicion? Liz seems to be affecting Isobel, too. When Max's sister tried to use mind control on her, Liz resisted, and even briefly turned into Rosa.

It's A Government Conspiracy, What Else?

As Kyle Valenti is fast discovering, Master Sergeant Manes seems pretty hell-bent on proving that the aliens in Roswell are out to destroy human life. Even though they've been living unassuming lives for decades, he refuses to accept that they came in peace. Could Max have been drugged somehow? Maybe someone else is corrupting his powers in order to frame him and his family.

So far, Max's power glitch hasn't hurt anyone, but it kind of feels like the clock is ticking. Even if Manes has nothing to do with it, if Max ends up doing more than just short-circuiting a small town, he and his whole alien family are in danger.