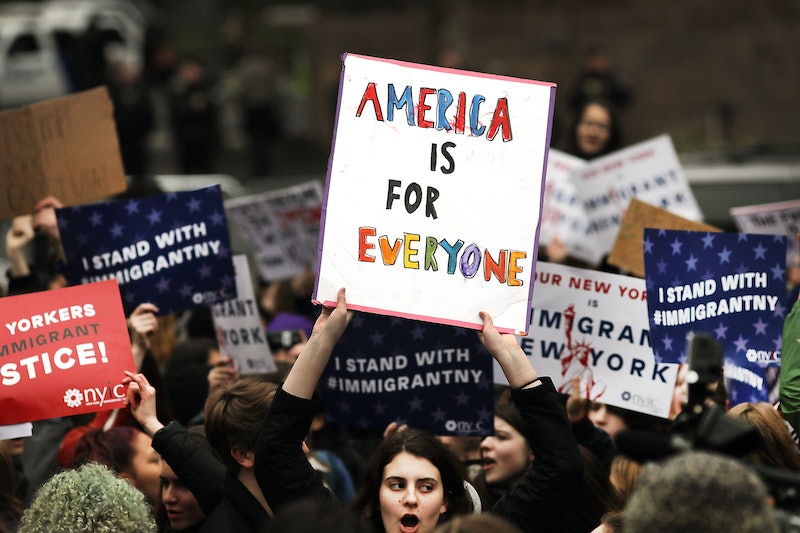 On Jan. 25, President Donald Trump signed an executive order that the White House said aimed to enhance public safety within the United States, mostly through shoring up the actions of U.S. immigration authorities. And in the past week, Immigration and Customs Enforcement seems to be fulfilling their part of the crackdown on undocumented immigrants through a series of ICE raids happening across the country. People in at least seven states have been arrested in what could be just the first wave of action in Trump's executive order.

There aren't clear numbers on how many people have been arrested as a result of these raids — which have occurred in New York, Texas, Kansas, North Carolina, Georgia, California and Virginia — but it is estimated to be in the hundreds (there were 161 arrests in southern California alone). Though immigration officials are saying that the "targeted enforcement actions," as ICE prefers to call them, are just business as usual — some even went as far as to say that the raids were not tried to Trump at all — advocates contend that the raid are directly related to Trump's executive order.

Agents swept up people by entering into their workplaces, homes and even snagged some at routine traffic stops. As the Washington Post notes, these raids have taken on a bigger scope than ICE actions under President Obama. Trump expanded the targets to not only undocumented immigrants with a criminal record, but for people who had minor offenses and no criminal history at all. Still, the vast number of the people, 151 out of the the 161, picked up in southern California had criminal records.

Trump promised that he would deport 2 to 3 million people living here illegally who have criminal records. But, as NPR reported, experts suggest that there are only 1.9 million "removable criminal aliens" living in the United States. Still, the promise to the American people that he would remove such a large number of criminals from the country could be a reason for the uptick in raids.

As NPR's Two-Way reported, most of the undocumented immigrants in the United States are concentrated within 20 metropolitan areas. Los Angeles, which has one of the highest numbers of undocumented immigrants, was the target of ICE raids. Houston and New York City, the other two cities with the highest number of people living illegally, have not yet been raided, though three other Texas cities were hit with raids this week.

If the raids continue, cities will be the primary locales. “Big cities tend to have a lot of illegal immigrants,” an anonymous immigration official told the Washington Post. “They’re going to a target-rich environment.”

The sheer number of high-profile raids taking part across the country seems like it couldn't have been a coincidence, but it's not clear if they were planned before Trump's executive order. If they are part of the White House's initiative to remove millions of undocumented immigrants, however, we can only expect the ICE raids to continue across the country.