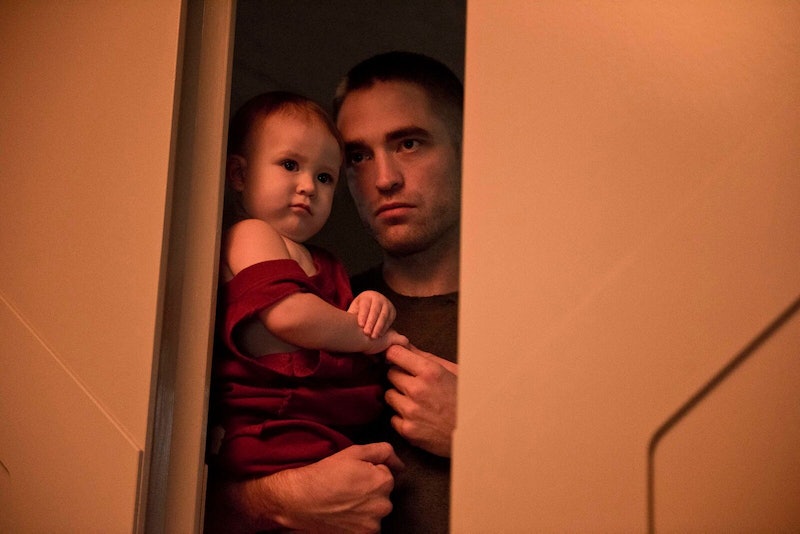 The space-set indie movie High Life starts with a baby crying. Loudly. She's in a spaceship and her dad is outside of the ship repairing... something. Using some sort of speaker stand-in for a baby monitor, he communicates with her and tries to calm her down. A parent and a baby alone on a spaceship is an exciting idea — intriguing from the start, but that's not what High Life is about. You might just wish you were watching that imaginary movie instead. Spoilers ahead.

High Life, out on a limited release April 5, is not going to be for everyone. The first English-language film from acclaimed French director Claire Denis (Beau Travail, Let the Sunshine In) is about sex, death, violence, reproduction, and the meaning of it all. Taking place on a spaceship filled with eight former prisoners and an evil doctor obsessed with procreation, the film features bloody fights between the crew, multiple rapes, and a room for masturbation called the "f*ckbox". This is what much of the viewing experience involves — seeing through flashbacks how these people, stuck in a ship tumbling toward a black hole, exist, and then cease to exist, together in a confined space.

Through this, we find out how the baby, named Willow (Scarlett Lindsey), came to be, the details of her relationship to her dad, Monte (Robert Pattinson), and who her mother is. But, while learning this information is what moves the story forward, it never fully feels like getting these answers is the point. And that isn't necessarily a problem. Exploring the carnal nature of humans in the small setting of a spaceship can be its own thing; but watching High Life, it just feels like there's another compelling story that's almost set up that could be told, too: The one about what happens when a baby is born on a spaceship and spends their entire life there. In that area, High Life leaves you wanting more.

The final 15 minutes or so of the film explore this idea at what feels like long last. At this point in the movie, time jumps forward and Willow (now played by Jessie Ross) is in her early teens. All she knows of Earth is what Monte has told her and what she's seen on a looping video of various odd scenes from the planet. She's clearly different than Earthling kids her age due to a lack of socialization, but she speaks almost normally aside from a few odd word choices here and there. ("Baby dog" instead of "puppy", for instance.) But this part of the movie doesn't last long, because the point of the film isn't as basic as "What will actually happen to this kid?"

For Denis, High Life is a bigger exploration of humans and sexuality, which is what the rest of the movie gets at. "A long time ago, I had in mind a story of an astronaut lost in space, far from the solar system," she told Vulture at the Toronto International Film Festival in September. "Everyone is dead, leaving him alone with a baby girl. I knew they would die in that place, never to go home. When she’s growing, turning of age, the only possible man for her will be her father. And for him, she will become a femme fatale in the realest sense: deadly, or rather, of death."

There is another recent movie that follows a child growing up away from Earth, though it's a contrast to High Life in almost every way. 2017's The Space Between Us focuses entirely on the idea of a baby being born on Mars and what would happen if he later tried to travel to Earth. It investigates what that would mean for his body and what his relationships would be like with other humans. Unfortunately, the result wasn't great, and the movie flopped.

Although her effort would have almost certainly been more interesting, that's not to say that Denis should have gone this direction with High Life. Though the child is a part of her plot, she's not the main character. And while critics have pointed out that High Life will be divisive for audiences, it's getting generally positive reviews.

Still, the movie left me wanting to know about the outer space-born child — why she talks the way she does and how she differs from "normal" kids. Where can she survive and where can't she? Where is she going? Who does she know? At the end of High Life, you will probably want to see that movie, too.