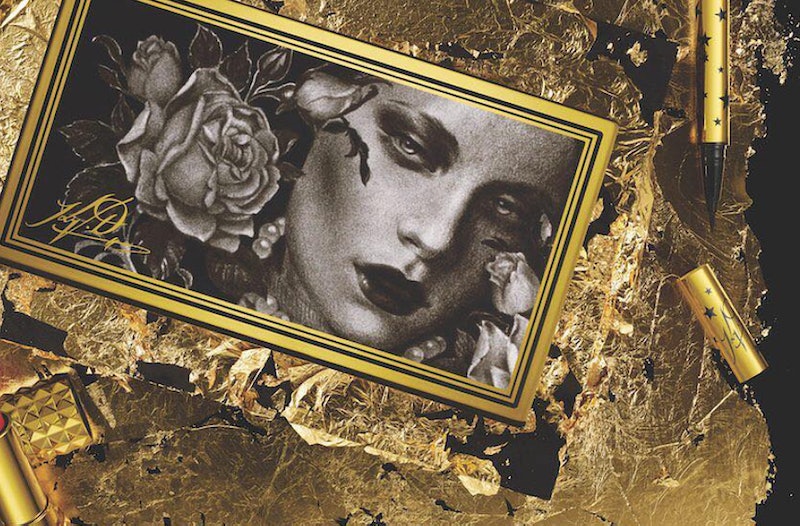 Kat Von D Beauty has been disrupting the beauty industry — in the best way— for a decade. The brand is celebrating its tenth anniversary in May. Of course the celebrity tattoo artist is going big with a suite of anniversary products. The brand has confirmed what's in the Kat Von D 10th Anniversary collection and Kat Von D-evotees are going to want every single product.

While the KVDB aesthetic is usually a touch of rock 'n' roll mixed with a whole lot of gorgeous and glam goth, the anniversary assortment is gloriously dipped in gold. The familiar and cool AF black packaging now looks like it's 24 karats!

The "covetable, collectible golden treasures" will arrive online via the Kat Von D Beauty site and the Sephora site on Saturday, May 5. The brand's fearless leader chose that date to celebrate her Latin roots, since it's Cinco de Mayo.

The celebratory treats will then cruise into Sephora stores on Sunday, May 21.

Here's what's in the entire collection, as revealed by the brand's official Instagram.

There's an anniversary Eyeshadow Palette, which hosts 16 limited edition shades. The brand's best-selling Trooper Tattoo Liner is included, but in golden pen form. The Everlasting Glimmer Veil in GoldSkool is also featured. The lip topcoat, which is just a fancy name for "lip gloss" in 2018, is gilded, as is the tube.

The Metal Crush Highlighter in GoldSkool is golden in both form and content. The product in the pan and the case in which it's housed go for the gold.

Of course there is a Studded Kiss lipstick. The poison apple red Sante Sangre shade lives in the signature studded case. Only this one is gold!

A five-piece, cruelty-free brush set is also part of the range.

One of the coolest products in this anniversary suite is the Train Case, which Kat Von D personally designed.

The Kat Von D-evotees were thrilled about the actual products. They want swatches and they want to part with their money to purchase these pieces. They are hyper-aware of the fact that Von D put so much thought and attention into the details and beyond.

The internal specifics of the train case are major. It has a blood red lining, while the internal mirror features a smattering a stars. Just like the ones that are tattooed on Kat Von D's gorgeous face. Her personal style and her brand's unmistakable ethos are felt in every aspect of the 10th anniversary series of products.

These comments pretty much sum up how most KVDB fans feel about this anniversary set. If you are on the hunt for a new and beautiful storage compartment for your latest makeup haul, the train case is so it.

Here's a closer look at the palette. Those eyes! Those lips! Those flowers! Von D let us have a look under the hood, as well. It's a rainbow of colors — bright blues, greens, pinks, and more. It's not your typical KVD palette, that's for sure. In this caption, Von D also confirms that there will be an Everlasting liquid lippie included in this collection. It makes sense, since those mega mattes are a hero product for Kat Von D Beauty.

It is indeed a beautiful collector's item that will look amazing perched upon an owner's vanity or bureau.

Stay tuned to the Kat Von D Beauty socials for further 10th anniversary collection reveals and details. Or you can totally hang out here and gawk over these pictures and teases.