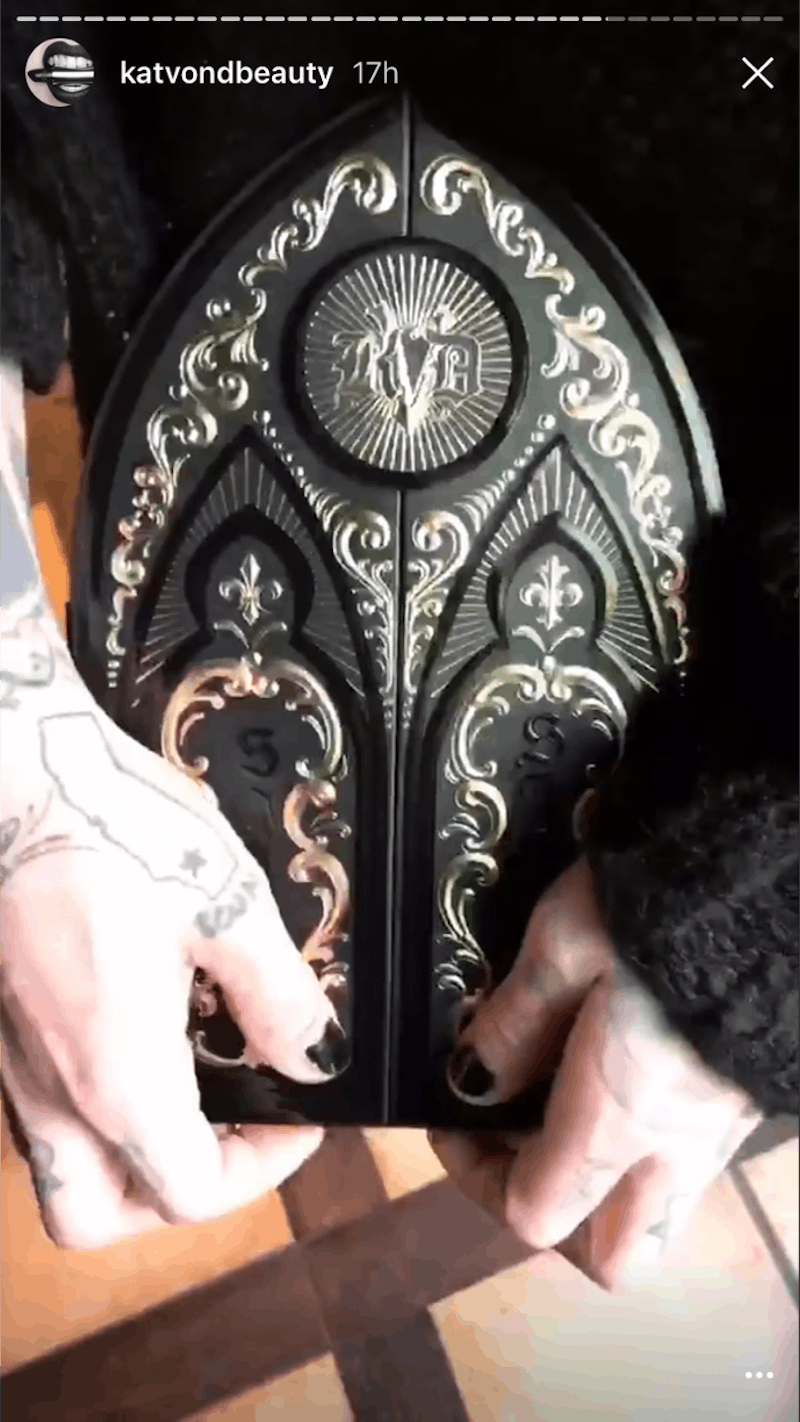 Coming from a former tattoo artist, Kat Von D's edgy, avant garde aesthetic makes sense. The woman has cats named Piaf and Poe, after all — darkly romantic is the name of the game, and her fans are here for it. The slightly morbid, haunted house vibe seeps into everything from her new blotting powders to this winter's Better Together Too Faced collab, but with her latest drop, I'm getting a Best Apart vibe. What's in Kat Von D's Saints and Sinners palette takes the heart-shaped palette's aesthetics up a notch and full throttle, so if that was right up your alley, this could be your new home.

Fog machine and/or black smoke aren't included, unfortunately, but there's reds and whites in abundance (and given Von D's knack for theatrics, that'd be an excellent unboxing add-on. Want). Von D teased the palette on her Instagram story last night, and after running a quick analysis of the photos, takeaway is: good.

Playing to the Saints and Sinners theme, the diptych palette features one side of "saintly" colors, soft browns and pastels, and another of "sinner" hues, among them blue, lime and purple. In other-brand terms, think one half Too Faced-esque neutrals, and the other Urban Decay Electric palette-worthy. Day to night, especially if your nights involve hitting up some serious nightlife and then a graveyard seance, as any good night does.

Von D's staked her name on that mix of edgy but ultimately wearable, and the arched palette should fittingly take fans to church. The response on social media is so far mixed, but given we've only gotten a five second glimpse, who knows how final opinions will fall.

The palette doesn't look exactly easy to store, but maybe it'll be like a statement piece for your vanity. Some people have shrines, others have palettes that look like shrines.

Pricing and a launch date are yet to be announced, but combined with the brand's lipliner newness, there's a lot to look out for. Those are staked for April 11, so following an ordinary timeline, the palette would come after. Also relevant, the Saint and Sinner perfumes have a July launch date, so we could be looking at a sister act. But: When has KVD been ordinary?