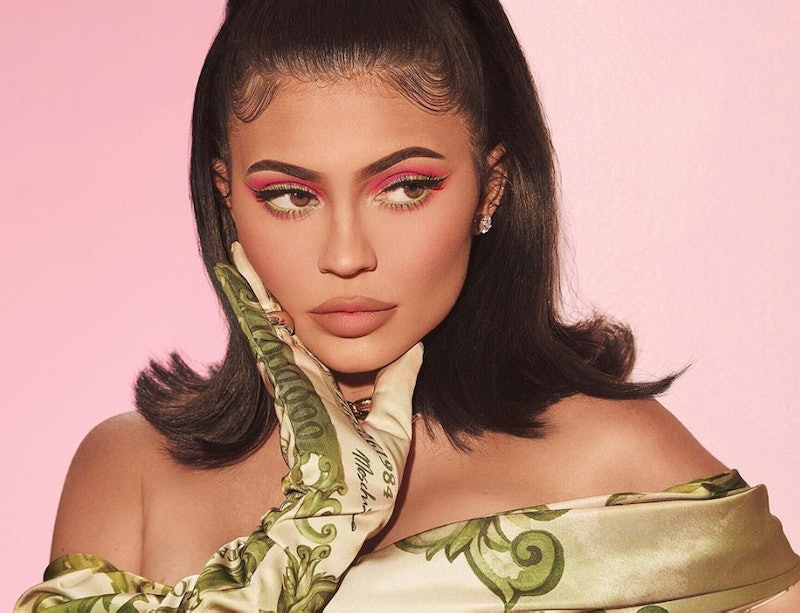 Kylie Jenner releases a massive Kylie Cosmetics Birthday Collection every August to celebrate another trip around the sun. These birthday sets are usually packed with new colors, shades, formulas, and products that she hasn't done before. The 2019 Kylie Cosmetics Birthday Collection drops on Aug. 10 and it's money. Literally! Bank notes, bills, and dollar signs are prominently featured throughout the millennial pink packaging and products, which feels like an overt play on her oft-debated status as a billionaire. Jenner did say in one of the Instagram stories revealing the collection that she will be donating proceeds from this range to charity, with additional details to be shared soon. She did not specify which organization or cause she would be supporting as of press time.

This year's birthday collection has another twist besides the charity element. It also features a few brand new products —like black liquid eyeliner — that Jenner has not created for her past collections.

Jenner gave fans and followers a sneak peek at the assortment in the Kylie Cosmetics Instagram stories posted on Aug. 1. Immediately, people were miffed about the money motif. While it's her birthday and she's giving back to the community with a donation and to her customers with a fresh slew of makeup, some people felt she was seriously missing the mark due to the money packaging conflicting with the do-good mission.

The shot above offers a look at that controversial packaging. The internet was quick to respond, noting that the packaging, theme, and graphics came off as an egregious flaunting of her considerable wealth — regardless of whether or not she is donating the profits. One user commented, "Kylie Jenner releasing a money-themed makeup collection in honor of her birthday is so... tone deaf." Another user believed that the bold and loud theme is directly at odds with the spirit of the philanthropy, stating that Jenner was "ready to make everyone feel poor and show off what it’s like being born into money again." Jenner did respond to a comment about making charitable donations, simply telling followers to "stay tuned."

The collection does look pretty bangin'. One of the eagerly anticipated new products is a black liquid liner pen that will serve as an effective tool for both seasoned veterans and rookies when it comes to eyeliner. Jenner specifically stated that the liner has a brush tip rather than a felt one. Stormi's mom explained that she prefers a brush because "it creates a sharper wing and it's super easy for me to apply." It's all you need to line, define, and create a cat eye flick.

Another brand new product Jenner created for her birthday set is the face primer. It feels like the logical next step, since the makeup mogul has been adding more and more face makeup to her repertoire over time. Jenner also teased the gleaming and bouncy texture Jelly Kylighters. Those babies will add so much glimmer and glow to your cheeks and brow bones.

As of press time, Jenner, who turns 22 on Aug. 10, did not reveal the price of the products or their status as limited edition or permanent offerings.

The 2019 Kylie Cosmetics Birthday Collection includes a Pressed Body Glow, which is a gold shimmer powder housed a circular compact. It features a dollar sign stamped into the product itself. So the controversial cash theme is anything but subtle. The range also features the "You're $o Money Baby" eyeshadow palette, which is full of pink, purple, and gold tone shadows in both matte and shimmer textures. There is a lipstick trio, lip glosses, and the Kylie Lip Kit shade is now available in the lighter and creamier velvet formula.

It's best to regularly check the brand's Insta for more details on what charity this collection will support and for additional swatching as the drop date draws nearer. Ultimately, the 2019 Kylie Cosmetics Birthday Collection is epic, expansive, and attention-getting.