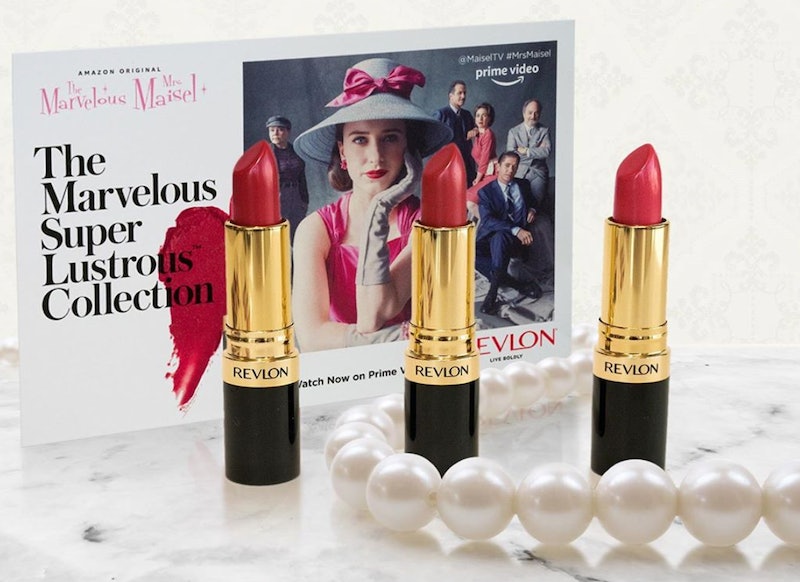 There's no better Revlon spokesperson than Midge Maisel. The character wears the brand's lippies and worked at the Revlon counter when not moonlighting as a stand-up comic on The Marvelous Mrs. Maisel. Therefore, it was only a matter of time before Revlon dropped two The Marvelous Mrs. Maisel lipstick collections, dubbed "The Revlon Marvelous Super Lustrous Collection." Each curated set is limited edition, costs $19.99, and features three Super Lustrous lippies in some of the most iconic shades in the Revlon repertoire. Some are shades that Midge has worn, while others are hues she would totally wear. The Mrs. Maisel lip sets are available exclusively at Amazon, which also makes total sense since the smash hit series is produced by and airs on the platform.

There's Take The Stage Reds, which features three crimson lippies. Of course the set includes Cherries in the Snow, which Midge memorably and expertly recommended to a fellow beauty shopper during the first season of the show. There's also Stand-Up Nudes, which boasts a trio of pinky lippies with different undertones. Revlon's signature Super Lustrous formula is rich and creamy, but it's also lightweight as it glides across your pout. You can wear any of these vibrant and super pigmented shades with a bare face and a coat of mascara and still be glam AF.

These lippies also have a deeper and more culturally impactful meaning. As viewers are well aware, the show follows Midge's career and journey to independence in the late 1950s and early 1960s. That's the same time period that Revlon's now-iconic Fire & Ice campaign debuted and encouraged women to wear makeup as a tool of self-expression, according to the press materials announcing the collab.

Overall, the characters on the show are all about their beauty routines and products. They regularly rock statement lip looks and those are celebrated by this collection. You can now copy your fave character's style. Yes, these collections are comprised of previously existing shades. But they are being sold in a branded bundle that both diehard fans of the show and lipstick lovers will surely appreciate.

Get red-y for Take The Stage Reds. This set includes some of the most unforgettable scarlet tones. You get Fire & Ice, a creamy, bright orange-red, and Certainly Red, a creamy and juicy true red. The infamous Cherries In the Snow, a cool fuchsia red, rounds out the range. Each shade shakes out to less than $7 per tube.

The neutral collection is comprised of Blushing Mauve, a warm and pearlized pinky nude, along with Pink Truffle, a sheer pinky brown hue. There’s also Rum Raisin, a creamy mauve brown. These shades will work with any and all skin tones.

The Revlon x The Marvelous Mrs. Maisel lipstick sets are available while supplies last. You can obviously mix and match the lippies in each collection for a totally custom lip look. However, if you want to get really creative, you can grab both sets and layer reds and nudes to see what makeup magic you come up with. Whatever the case, you are guaranteed to find something that matches your mood and will be Midge Maisel-approved.