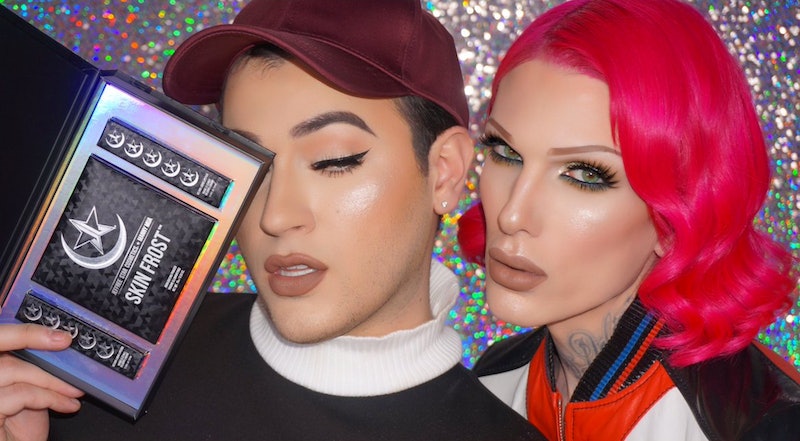 The announcement we've all been waiting for is finally, finally here. The Jeffree Star Cosmetics x Manny MUA makeup collaboration was officially announced on Manny's YouTube channel, and it looks like it was worth the wait. While they teased us with the products and the packaging last week, this is the first look we've had at the shades themselves, and they are so worth getting stoked over.

The pair started the video by revealing that that they started talking about the collab over a year ago, so it's been a long time coming for them, too — I guess we weren't the only ones waiting. The final masterpiece is all bundled together in chic black and silver holographic packaging, combining both of their logos (a star and a moon). It contains two of Starr's cult favorite Velour Liquid Lipsticks as well one of his beloved Skin Frost highlighters.

The collaboration will drop on Starr's website on April 8 at 10 a.m. PST (or 1 p.m. EST), and the whole bundle will be $50. You can buy 'em individually as well — the liquid lipsticks are $18, and the highlighter is $28. (Psst – if you're buying individually, you can use the code MANNYMUA at checkout for a 10 percent discount.)

Now, what you're really interested in. Without further ado, here are the shades you can expect in the Jeffree Star Cosmetics x Manny MUA makeup collaboration.

Little did we know, Manny's been wearing this highlighter all the time in his Snapchats for a while now, according to Starr. They describe it as an "icy peach" shade, and I couldn't agree more.

This name though — I die. If that weren't already enough to sell me on it, the shade's amazing too. Manny calls it a "cool-tone medium brown" with a "grunge glam" aesthetic, and Starr says it reminds him of '90s supermodels. It's got some mauve-y undertones to it, too.

"I'm shook" pretty much describes everyone's feelings about this collaboration, so it's only fitting. They describe this as a burnt coral color, but I'm getting some cherry-meets-magenta vibes too.

Want to watch the whole reveal? Here's the video in all of its glory.