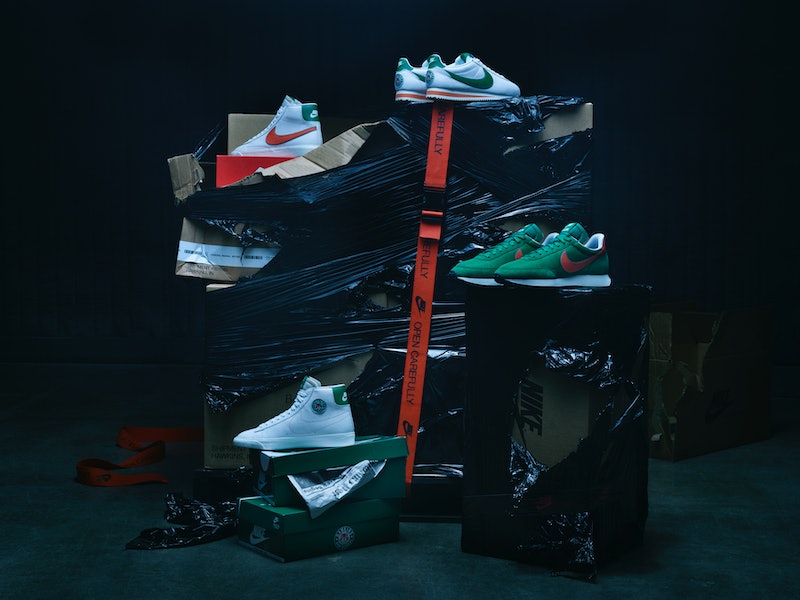 The third season of Netflix's smash series Stranger Things "kicks" off on July 4. There's no better way to celebrate a new season of mystical, unexplained happenings than with a cool sneaker and fashion collection inspired by the show. The first Nike Stranger Things collection arrives on June 27 and it's more than just delightfully retro-looking sneakers — although there are plenty of those. The Hawkins High Collection includes '80s gym class-inspired tees, hoodies, and more. The range feels like proto-athleisure — that is, athleisure before athleisure actually became a thing.

Since Stranger Things is set in the '80s, the characters are often decked out in vintage Nikes and other prominent styles that defined the decade. The fashion vibe of the era factors into every pair of kicks and every piece of apparel in this capsule. The upcoming season takes place in 1985, so that year is a key detail featured throughout the pieces.

Ultimately, the youthful Nike Stranger Things collab will make you feel as though you are a student attending Hawkins High School in small-town Indiana, thanks to the branding. You can totally twin with Millie Bobby Brown's Eleven and co. courtesy of this range. The eagerly anticipated capsule will be available at most Nike retailers, such as Bodega, Shoe Gallery, Nike Lab 21K, and more.

The debut drop features the iconic Cortez, Blazer, and Tailwind sneakers. All three styles sport both the Hawkins High and Nike x Stranger Things logos, as well as a tongue label that reads "Made to the exact specifications of Hawkins HS athletes" and "Property of Hawkins Athletic Dept." The kicks come with packaged with special edition pins, according to the press materials received by Bustle.

As for the clothes, Hawkins High's green and orange school colors and its tiger mascot are incorporated into the designs. The range is comprised of a tee, a hoodie, a pair of pants, and a cap.

Nike actually teased the Stranger Things assortment with a clever viral campaign that mirrored the show's plots. The marketing push certainly gave the collection a believable backstory and explained some of the detailing.

Here's the gist. The brand tweeted that several vehicles packed with Nike products intended for the Hawkins High Athletic Department disappeared after departing the company's Beaverton, Oregon headquarters back in 1985. These long-missing products recently started turning up and are what you see in the collection. How creepy and cool, right?

A second shoe drop, dubbed the "OG Pack," is planned for July 1. It also features the Cortez, Blazer, and Tailwind silhouettes. Those holiday-themed kicks are red, white, and blue, and defined by all of the Fourth of July details. Each pair will feature "19" and "85" etched on the back heels, while the tongue labels will boast the Nike x Stranger Things logo. The sock liners have a fireworks design, too. The second sneaker drop is a stylish way to celebrate America's birthday and the launch of the third season.

The Stranger Things branding will allow diehard fans to outwardly express their love for the show through Nike footwear and fashions. However, this vintage-looking collection is so cute that people who've never seen a single episode will still want to wear it.