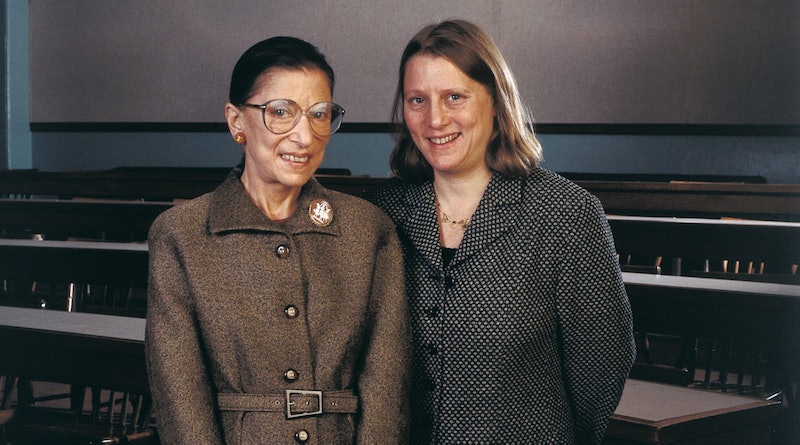 The Ruth Bader Ginsburg biopic, On the Basis of Sex, shows how the iconic Supreme Court justice (played by Felicity Jones) landed a life-changing, groundbreaking case that kickstarted her triumphs. But the film also shows her daughter Jane’s (Cailee Spaeny) own journey into becoming an outspoken champion for women’s rights, finding inspiration in women’s rights icons like Gloria Steinem. But what is Jane Ginsburg doing now?

Ginsburg might not be as big of a name as her mom, but she’s certainly following her mom’s footsteps. In the film, we get to see how passionate she is about law, engaging in debate about her views on To Kill a Mockingbird’s Atticus Finch’s actions. And her Supreme Court justice mom also takes her to meet civil rights lawyer Dorothy Kenyon, so Ginsburg can have the experience of meeting another influential female lawyer.

Those experiences shown in the film closely mirrored real life, with Ginsburg becoming a Professor of Literary and Artistic Property Law at Columbia Law School, where she has been teaching since 1992, according to Columbia's site. And teaching at one of the world’s best law schools is one of her many accomplishments.

In 2011, Ginsburg was elected as corresponding fellow of the British Academy, according to Columbia Law School Magazine, being one of the nine U.S.-based scholars picked for the coveted fellowship, where she was recognized for her achievements in intellectual property law and private international law. She also became a member of the American Philosophical Society in 2013, and of the American Academy of Arts and Sciences in 2015, according to her resume, which can be found in her Columbia University bio.

Her resume also reveals that, just like her mom, Jane attended Harvard Law School, showing how much of an influence Ginsburg had on her daughter. And in a Glamour essay, her daughter, Clara Spera, explained that Jane passed on the tradition to her, too. In the essay, Spera detailed the impact that her iconic “Bubbie” had on her career as a lawyer.

“Previously, I thought that winning, and only on my own terms, was the path to success (just ask my former debate partners). But her work and friendships — like with the late Justice Antonin Scalia — have inspired me to listen to those I may disagree with and to find areas where we can build together,” wrote Spera.

Both Spera and Ginsburg appeared in the recent Ruth Bader Ginsburg documentary RBG, which was released in 2018, noting their awe over the Supreme Court justice’s tenacity and pop culture standing. “She will work until two, three, four, five in the morning. Sometimes even later. Then she will get up, she has a sitting. She would have to be at the court before nine, and then she sleeps the entire weekend,” remarks Ginsburg about her mother in the doc.

And Spera is also shown at the beginning of the documentary sharing a sweet moment with her grandmother, showing her Harvard graduation pictures. “It took 200 years for us…We were the first class that was 50/50 women,” says Spera to Ruth. As Ruth Bader Ginsburg busted through glass ceilings, she paved the way for the next generations of the Ginsburg women, who have become proponents and protectors of the law in their own right.