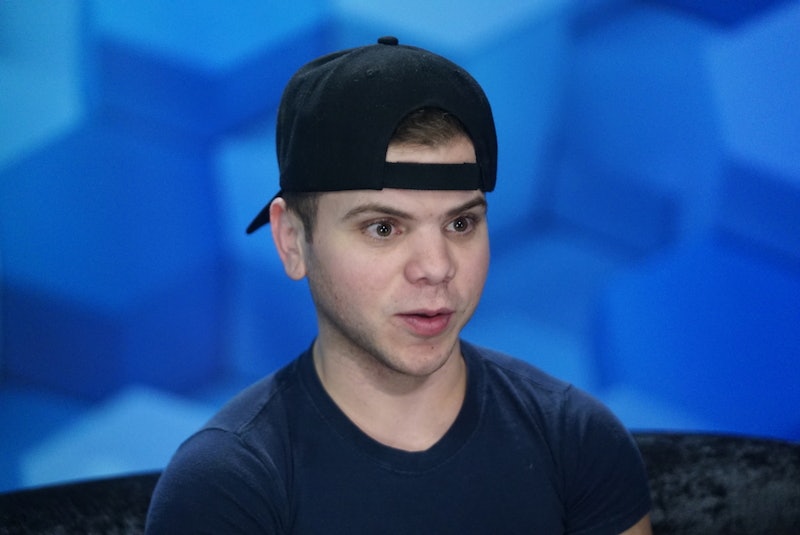 When you're on Big Brother, you have to use every prior experience and knowledge-base to your advantage in order to outsmart and outmaneuver the other houseguests. And one contestant in particular, JC, thinks that somehow, his professional experience will come in handy in the house. So what is Big Brother 20 houseguest JC's job, and how could it potentially give him an advantage on Big Brother?

JC is a high energy guy, and that energy translates well to his career, because JC works as a professional dancer. Though he hasn't yet shared what dance troupe he might be a part of, or where exactly he has performed, JC told Entertainment Tonight that he has been involved in dance productions around the world. "Yeah I do dancing, productions, entertainment, just that environment," he told Brice Sander of ET. During the interview, he also shared that his job has taken him all across the world, and granted him with experiences that he thinks will be to his advantage in the game. He said:

"The fact that I actually work in this environment has given me the experience to like go and like live in different countries for like a period of time, and with like 20, 25 people from also different countries, different languages, so I've seen so many things, and I've experienced so many things that they have no idea that I actually like already know about it. And here we're on TV and over there we weren't, so I've seen like crazy things... and they don't need to know that I have that I have that experience. They don't need to know that I come from a background where every single summer that's what I've been doing. Living in a Big Brother house but in some other country with different people, and they don't even speak the same language. So I think that's something to my advantage."

It sounds like JC has a whole strategy on lock, and his career as a dancer plays an integral part of the way he's going to play the game. And even though JC is sensitive about his height (he's 4'8'', and told CBS he has "a very short fuse" when it comes to people making fun of his height) he plans to use that trait to his advantage. "I am going to be the sweetest small guy that everyone would want to hug and kiss," he told CBS about his strategy to win the game. By being a kind, outgoing guy who gets along with everyone in the house, JC could fly under the radar and not be perceived as a real threat, all the while working towards being the winner of Big Brother Season 20.

But if JC really is looking to be everyone's friend this season, he should probably think about his changing some of his behavior. JC has come under fire lately for alleged sexual harassment of his fellow houseguests. Us Weekly reported that in a live stream video of the Big Brother house, JC attempted to place an ice cream scooper on the genitals of various other contestants. The same report noted that he urged houseguest Kaycee Clark to “open up your vagina” because “it feels good”, while she audibly told him, "No." According to the report, JC also cupped Tyler Crispen's genitals over his pants. Though JC and the other houseguests have yet to speak out about the incident on air, Newsweek reports that CBS has released a statement regarding the alleged harassment:

"Big Brother is a reality show about watching a group of people who have no privacy 24/7 and capturing every unfiltered moment and conversation in their lives. At times, the houseguests reveal prejudices and exhibit behavior that we do not condone...The producers have addressed two such incidents that were seen recently on the 24/7 online feed. In both cases, those involved have been warned about their inappropriate behavior and offensive comments, as well as future consequences. These events will not be part of any future Big Brother broadcast on CBS."

If these allegations are true, then JC is likely not making lots of friends in the house. He might want to reconsider whether that reported behavior falls under the umbrella of being a "sweet guy." If he doesn't change his act, JC might be dancing his way out of the Big Brother house sooner than he would like.