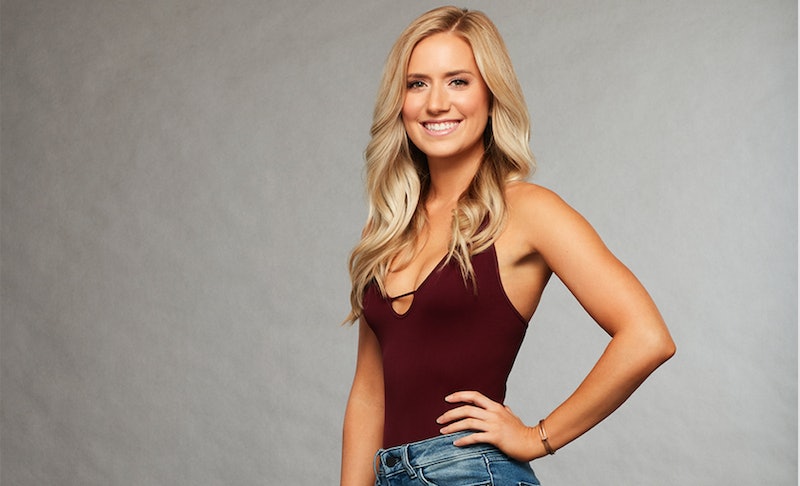 Arie may have started his Bachelor season with four Laurens, but four episodes in, there's only one left standing: Lauren B., the 25-year-old salesperson from Virginia Beach, Virginia. Now, all eyes are on her to win one for the Laurens, and what Lauren B. is doing after The Bachelor could hint at how far she makes it. Right now, her odds are looking good.

So far, fans haven't had the chance to see much of Lauren. She took on Marikh during their quirky, wrestling-themed group date, got interrupted by Krystal while she was trying to have some alone time with Arie, and then finally got to open up a bit, telling Arie it was hard for her to be vulnerable, which seemed to move their relationship forward. But that's pretty much all we've been privy to within the first four weeks.

Normally, Lauren's lack of screen time might signal that her time on the show is short-lived — producers tend not to waste time highlighting women that don't last long — but clearly, she's caught enough of Arie's attention to keep snagging one of his dwindling roses. And familiarity with audiences hasn't stopped contestants from sticking around before: By the tail end of Rachel Lindsay's Bachelorette season, both Adam Gottschalk and Matt Munson were nearly unrecognizable to fans, but they still made it through to Week 7.

It's hard to gauge how strong Lauren and Arie's connection is with only the limited glimpses we've seen thus far, but Lauren's social media accounts seem to be a pretty strong indicator that she makes it quite far in the quest for Arie's heart. As with all Bach contenders, she took a digital hiatus during production, not returning to Instagram until late December — a full month after filming had officially wrapped. It's certainly possible that contestants aren't permitted to post until after a certain date, so as not to leak any potential spoilers, but Annaliese, who was sent home during Week 3, was 'gramming it up by early November. That Lauren's return didn't come until much later is a solid clue that she has a long run on the show — and perhaps, even manages to land a proposal.

She's also been suspiciously quiet on social media. Looking back through her Instagram feed, she was never especially active, but she did share snapshots of her friends, family, and (very adorable) dog fairly regularly — as in a couple times a month, save for a few exceptions. Recently, she's been posting more frequently, but her photos are almost exclusively about The Bachelor. She's shared exactly one photo of her friends and one with what looks like her family, both around the holidays. The rest are all tied to the show. Could it be that she's been busy sneaking around to see her new fiancé?

It's common practice for Bachelor/ette cast-offs to capitalize on their reality TV fame by getting involved in other projects, whether that be moving on to franchise spinoffs, like Bachelor in Paradise or the soon-to-launch Winter Games, promoting products on Instagram, or launching podcasts. Sure, it's early, but Lauren B. doesn't seem to be doing any of that, which may well be because she's happily engaged.

Then again, it's just as possible that she's just not that into being in the spotlight. Some people do go on The Bachelor simply for the experience, and she could be perfectly content returning to her normal life and chalking it up to a fun, globe-hopping vacation. Whatever the case, Lauren is keeping details tightly under wraps, and right now, what she's been doing post-Bach is pretty much anyone's guess.